This week, Ad of the Week winner Kohl’s reminds us about the magic of the holiday season in its latest seasonal spot. The festive and attention-grabbing ad earns the title of Category Overachiever for its ability to engage consumers through a touching, enchanting story. In terms of highest Ace Score, Pizza Hut takes home the crown this week for its ad touting its new pizzas and accompanying refreshed logo.

Consumers awarded Kohl’s “Holiday Magic” an Ace Score of 640, which is 14% above the 12-month norm for the Department Stores category. The minute-long spot features a father and son who take a wintery drive through a forest to see a little Christmas magic from far up north. Kohl’s introduced the 0:30 version back on 11/9, which earned an Ace Score of 611. This week’s lengthier spot takes its time to tell the touching story, grabbing top scores in breakthrough components and earning outstanding Emotional Sentiment placement, which is based on the ad’s 363 optional comments.

While every age and gender demographic awarded the ad a score above the 90-day Department Stores norm, the ad skewed older overall. Women ages 50+ scored the ad the highest with an Ace Score of 700. Looking at the optional comments left by consumers ages 50+ reveals that this older age group found the ad especially emotive, using the word “very” in 11% of their responses. 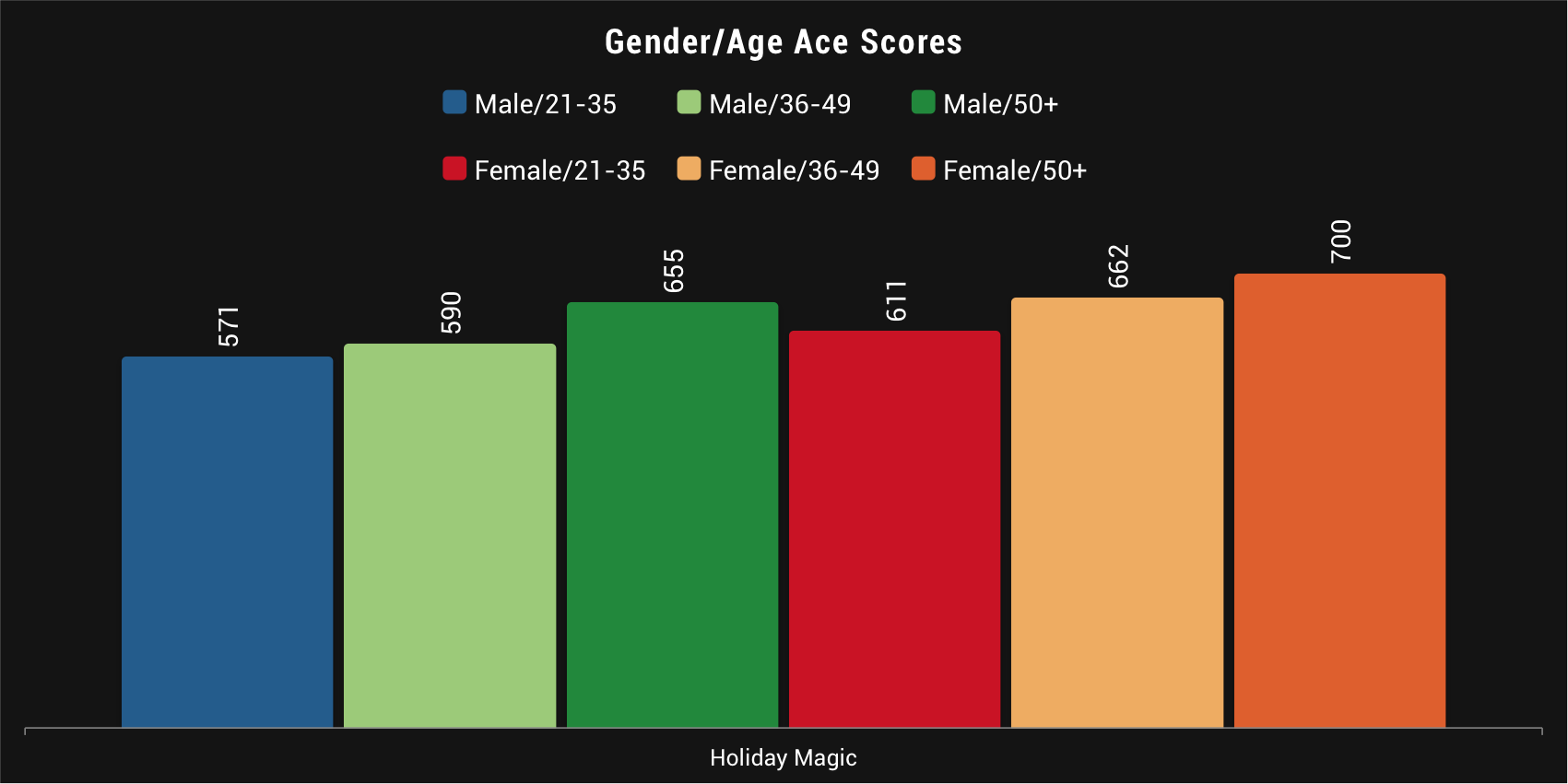 The components chart below shows us what dimensions of the ad really resonated with consumers. Clearly this was a spot aimed at grabbing our hearts rather than our wallets. Information scores are unsurprisingly below norm while breakthrough components of Attention and Likeability soar to 740+. Likeability scored 21% above the 90-day norm while Attention scored 18% above norm.

Consumers used words like “magic” (8%), “great” (10%), “loved” (5%) and “heartwarming” (4%) when discussing their thoughts and feelings in their optional comment for Kohl’s. The descriptive verbatims generated an Emotional Sentiment score of 81, which is 40% above the brand’s average.

The combination of the ad’s moving Christmas story and the simple yet striking visuals helped Kohl’s create a branding ad that grabbed consumer attention and captured their emotions.

Pizza Hut debuted its first ad showcasing its new pizzas and logo last week. The ad “Innovative Pizza” was the first slice of the pie and also the highest scoring with an Ace Score of 656. The minute-long spot asks real Italians how Pizza Hut’s new pizzas live up to traditional, Italian pizza. Needless to say, the results are quite humorous.

Pizza Hut baked the perfect ad with “Innovation Pizza,” producing high Information and Change scores for the QSR category and within the brand itself. The ad effectively informed consumers with an Information score 14% above the QSR 90-day norm. Highlighting its new crusts, sauces, toppings and logo, the ad also successfully produced a Change score 19% above norm.

The tasty looking pizzas and adorable pizza critics were what really won consumers over. Twenty-five percent of survey respondents said the ad’s product was the best thing about  “Innovation Pizza” while 23% said it was the ad’s characters. 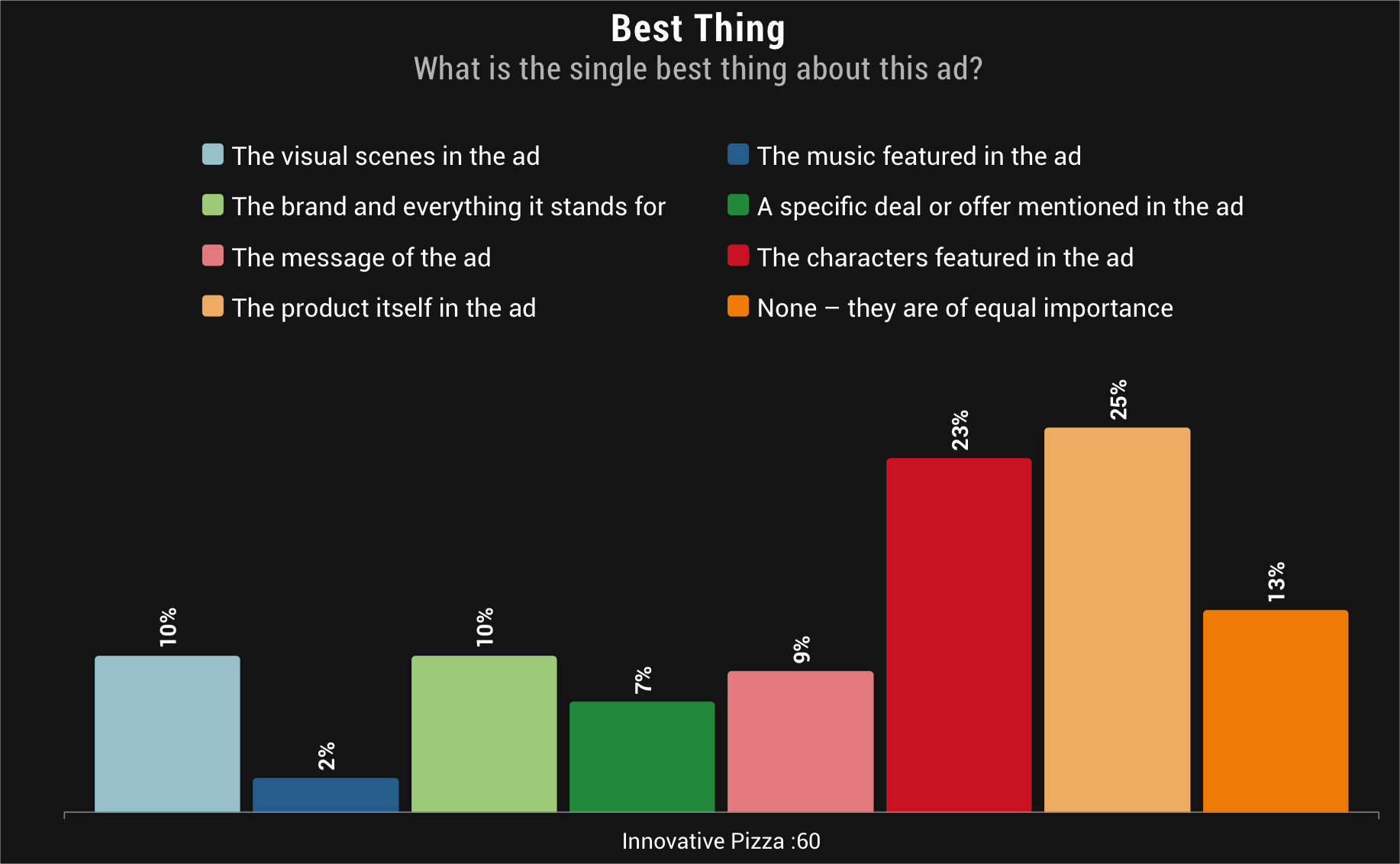 The word cloud below reveals the secret sauce to Pizza Hut’s advertising recipe. Thirteen percent of consumers said the ad was “funny” while the same percentage also mentioned the “new” pizzas. Another 11% used the word “love” to describe the way they felt about Pizza Hut, the people in the ad and pizza in general. 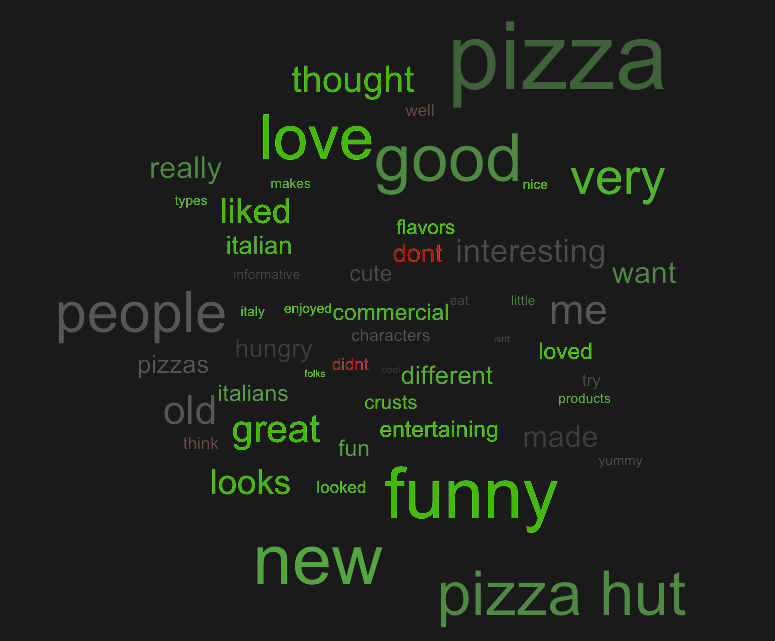 Pizza Hut impressed consumers with its new pizzas and amusing interviews. It’s also worthy to note that Pizza Hut achieved these high scores without the use of delicious, close-up food shots—the popular pizza brand simply used clever and clear marketing to get their message across. Bravo!

Nest and Subway take Ad of the Week Honors