Advertising’s biggest day happens each year on broadcast TV, and the brands that pay big money for the game treat it as such. A growing population of Americans, however, is watching the live stream of the game and brands are missing an opportunity to capitalize on this extended audience. We score all the broadcast ads from kickoff to the last seconds of the game, but we also watch the online version to see how brands are treating those fans.

The feed from Fox was great. There was some slight lag, but we didn’t have to refresh or close out at all – a step in the right direction for streamed live sports. From an advertiser perspective, there is definitely room for improvement. From a demographic perspective, online advertisers likely got a great deal  – captive Super Bowl audience, likely higher income and likely early adopters of technology. Advertisers know that commercials are a key part of the game for viewers, so why not treat the online viewers like they are watching a big event and not just any other game?

Fox sold the online ads separately from the broadcast version, so while 14 of the 43 national broadcast brands also ran their spots online, 12 additional brands took advantage of the discounted buy. Here are a few takeaways for this year’s advertisers and for those brands who are considering an online buy in the future.

You don’t want to be the brand that makes everyone groan because your same ad is on for the umpteenth pod in a row. It’s okay to buy multiple spots in the game, in fact that’s great branding and is a good opportunity for storytelling. Exxon and Samsung in particular each only ran one unique ad and it carried through multiple pods. Pizza Hut ran a spot from their new campaign, but there are two other spots (that are higher scoring) that could have helped weave a brand story. These brands simply gave us the feeling that we were getting filler creative

While some viewers of the online game may have seen a slightly different count based on any necessary refreshing, here are the online-only advertisers ranked by number of times their spots ran. We single these brands out because the broadcast advertisers who also ran their spots online topped out at a frequency of three from RadioShack. 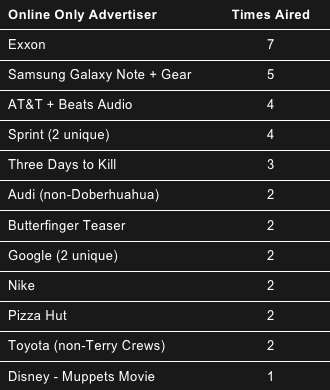 Be Savvy with Your Creative Choices

Google was the winner in terms of savvy media placement, in our opinion. They ran their “Play from the Heart” spot that features Google Play. What a great match to put a technology ad in front of people who have opted to watch the game online! Samsung was also right to choose the online version of the game to show off their Galaxy Note and Gear products, but it would have been nice to see spot rotation. Here’s a look at Google’s “Play from the Heart” which hits particularly well on Relevance and Desire.

We also liked what Audi did with their buy. They reached way back to 2012 and reused “Car Eludes Tow Truck Man” and ran it twice while also airing “Doberhuahua” at the same time online as they did on broadcast. “Car Eludes Tow Truck Man” is the perfect ad for the winter that most of the country is having – polar vortex, crippling snowstorms in Atlanta –Audi addresses all of these situations without being explicit about it. The 2012 spot is also a top quintile ad for the last 90 days, a smart choice against the current crop of new luxury Automotive creative.

You would only know it if you watched the online version along with the broadcast version, but nearly all the broadcast advertisers that aired their spots online put them in the exact same pod and location within that pod. While it’s not required that the online version of the game mimic the broadcast version, it makes it easier for those watching online to engage in social media along with everyone watching broadcast. While social wasn’t as overtly a part of this year’s creative as last year, (think 2013’s Coke Showgirls and Lincoln’s spot), it continues to be a place where brands can excel and conversations abound.

As the audience for the online game continues to grow, advertisers seems to be getting smarter and savvier with maximizing the opportunity, but there’s definitely still room for improvement. We look forward to seeing what brands can put these lessons to practice next year, hopefully causing fewer sighs of frustration after seeing the same ad for the seventh time.

Watch the Ads from Super Bowl 2014