The results are in, and we’ve crunched the numbers. The first annual Ace Metrix Big Game Ad Showdown Contest received online entries from throughout the US. Our contest invited you, the TV ad-loving public, to predict the winners in 10 separate “Ad Showdowns”, including the Soda Showdown (Coke vs. Pepsi), the Lux Auto Showdown (Audi vs. Jaguar), and the always-challenging Yogurt Showdown (Chobani vs. Oikos).

None of you ran the table with a perfect 10-for-10 record – a very tall order – but we did receive three entrants who successfully picked nine out of 10 showdowns correctly. From these, we randomly drew a contest winner. Congratulations to Raj V. of New Jersey – winner of an iPad mini!

The contest ran from January 23rd right up to kick-off on Super Bowl Sunday. Many of the showdowns featured ads that had been pre-released. But others were more difficult to call, with one or both sides holding back their creative until game time.

How did you fare? The average number of correct picks was 5.6 out of 10, with nine being the tops, and two being the cellar. We should mention that the Female Celebrity Showdown never happened. Carmen Electra didn’t appear in VW’s spot, despite her being featured in the teaser, so we gave everyone credit for getting that one right.

An analysis of the most popular and least popular picks provides an interesting glimpse into which brands (and celebrities) have an edge in name recognition or reputation compared to a peer. The widest margin among the 10 showdown pairs belongs to M&M’s in the Snacks Showdown, selected by 87% of entrants compared to just 13% who selected Butterfinger. GoDaddy.com – a well-known Super Bowl advertiser – was a close second, receiving 85% of the selections in the Website Showdown vs. 15% who chose the more obscure, and Super Bowl newcomer, Squarespace.

On the flip side, both the Yogurt Showdown and the Male Celebrity Showdown were virtual toss-ups. Chobani had a slim edge in yogurt – 52% vs. Oikos’s 48%. And Arnold Schwarzenegger, who appeared in a Bud Light spot, received a whisker more picks than David Beckham, who appeared in the H&M ad: 51% to 49%.

The chart below wraps it all up, showing who was preferred and who wasn’t across each of the 10 showdowns. The winning ad is spotlighted in orange. M&M’s turned out to be the right pick, whereas the dark horse Squarespace surprised most people by prevailing over GoDaddy.com. 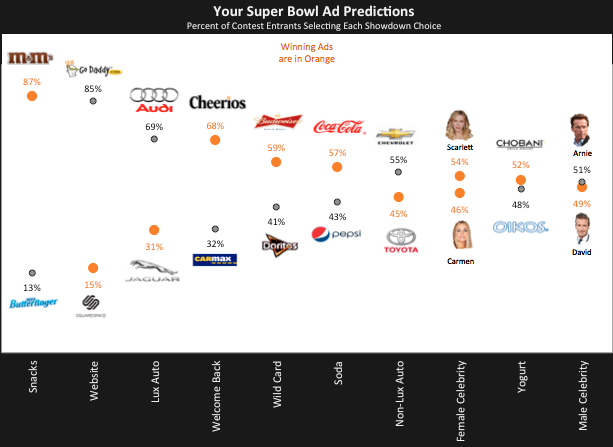 Stay plugged into the blog for more Super Bowl updates throughout the week. And keep your eyes open for the second annual Ace Metrix Super Bowl contest coming your way in less than a year.