After many tumbles and triumphs, Procter & Gamble was named the most effective Olympic Sponsor to advertise during the Games in terms of overall ad effectiveness for both its corporate branding efforts, which earned Gold, and several of its individual brands, including Febreze which earned the Silver. United Airlines took the Bronze for a series of Olympian-packed Team USA ads.

“The Olympics is one of a handful of epic stages for global marketers to engage with a broad, highly attentive audience and to make a lasting impression,” said Peter Daboll, CEO of Ace Metrix. “In our analysis of both the Summer and Winter Olympics, we’ve seen outstanding campaigns as well as individual ads. Brands like P&G and United were able to effectively communicate a link between the brand and the celebration behind the Games. Others, however, struggled to present creative that resonated with the majority of viewers.”

*Advertisers considered for this list are Official Sochi 2014 Olympic sponsors or sponsors of the 2014 USA Olympic Team airing at least three new ads during the events. This list identifies the three advertisers earning the highest average Ace Score for their ads leading up to or during the Olympics. Based on data collected for ads debuting up until February 23, 2014.

Procter & Gamble once again dominates the Olympics with a combination of strong corporate branding ads, leveraging a highly emotive and viral “Thank You Mom” campaign, and a series of product ads for more than a dozen of its brands. P&G’s highest rated ad, “Mom’s Work :60”, receiving the number one spot on the Olympic top ads list, drew extremely high scores in both Likeability and Attention.

Febreze earned the silver medal for a set of new product ads featuring children, a method P&G has demonstrated successes with in other campaigns. While Febreze’s top Olympic ad “No Need For Ninjas” skews more female, it still gained interest from the elusive male audience for the Household category. 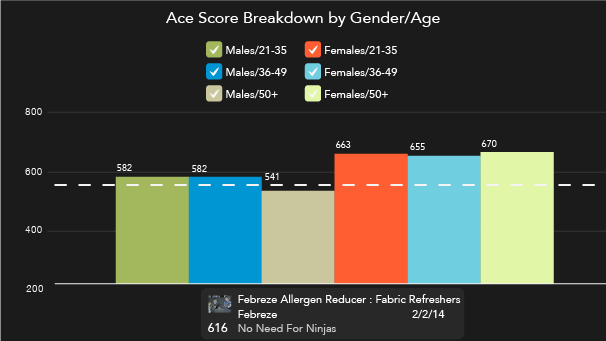 United’s bronze medal is this year’s surprise since airlines contribute such a small number of new creative each year; these three Olympic themed ads from United represent nearly half of the ads that have debuted in the Airlines category for 2014. United’s Olympian studded ads performed 6.3% above the category norm and 7.4% above the Olympics average (the largest gap-to-norm of all Olympic advertisers), earning the brand a bronze medal as the third most effective sponsor overall. With quick paced, uplifting music and a variety of Olympians featured traveling its friendly skies, United conveyed its long-standing Olympic sponsorship with just a few words, courtesy of Matt Damon. United’s :60 spot performed best, earning a 71 on our Emotional Sentiment Index (compared to 57 for the United brand overall).

Most Effective Ads by Olympic Sponsors* 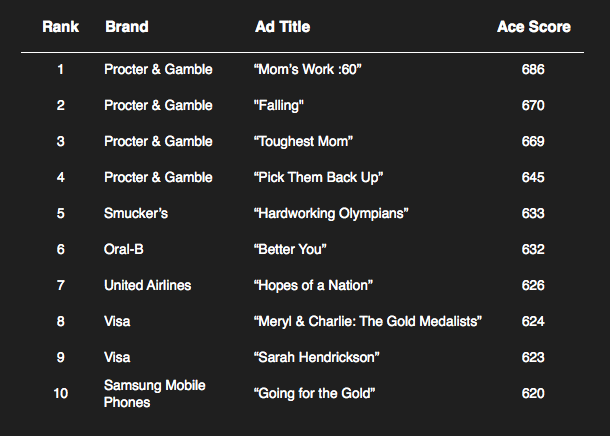 *Definition: The Ace Score is the measure of ad creative effectiveness based on viewer reaction to national TV ads. A unique sample of 500+ people, representative of the U.S. TV viewing audience, scores each ad. The results are presented on a scale of 1-950, which represents scoring on creative attributes such as Persuasion, Likeability, Information, Attention, Change, Relevance, Desire and Watchability. An Emotional Sentiment Index is also available for each ad and is represented on a scale of 1–100, generated using a natural language algorithm applied to the hundreds of verbatim responses collected for each ad. Advertisers considered for these lists are Official Sochi 2014 Olympic sponsors and sponsors of the 2014 USA Olympic Team airing new ads during the events. This list identifies the advertisers earning the highest average Ace Score for their ads leading up to or during the Olympics. Based on data collected for ads debuting up until February 23, 2014.

Consistent with the Summer Olympics, America rewards Olympic ads with slightly higher scores. The average Ace Score for Olympic themed ads is 563 versus a non-Olympic ad norm of 551. While all age and gender demographics contribute to the increased scores, the mature viewers (ages 50+) showed the largest impact, on average, scoring the ads more than 20 points higher than non-Olympic ads. 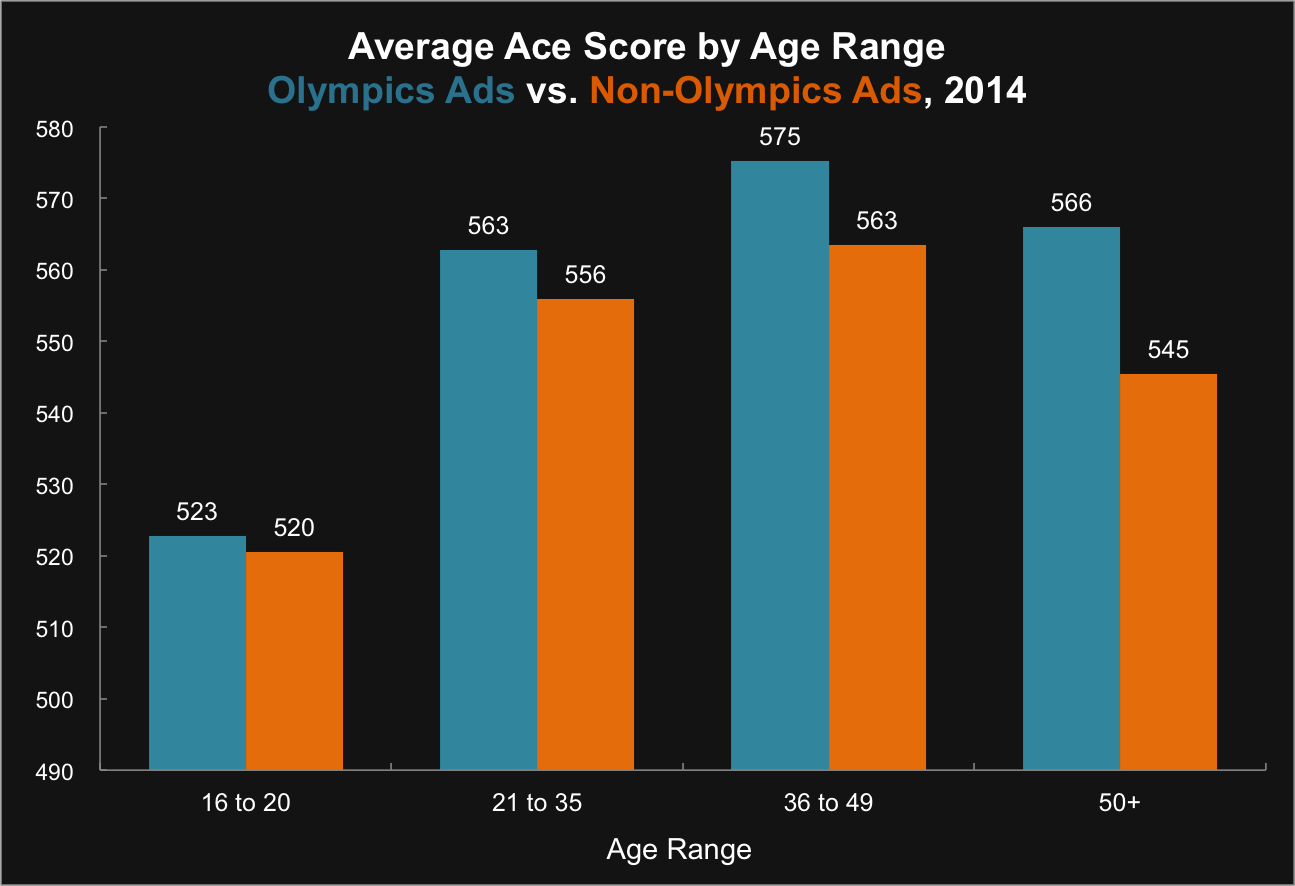 The Power of the Olympians

Seventy-two percent of Olympic themed ads featured athletes, up from 58 percent during the London Summer Games. Ads without athletes performed just as well as those that featured a single athlete (average Ace Score 559 versus 560, respectively), while ads that featured more than one athlete performed best (average Ace Score 571). P&G, United, Smucker’s and Visa all employed athletes in the ads that make up eight of the top ten most effective ads of the Games.

P&G earns five places on the most effective ads of the Olympics list – four from the highly successful “Thank You Mom” campaign, which mostly debuted in January, and one for a stand-out Oral-B ad communicating the brand’s dedication to building a quality product made in the USA.

Coca-Cola Fails to Reach the Podium

The Silver medal winner of the London Games, Coca-Cola’s average Ace Score was 9.6% lower during the Winter Games (579 versus 523) with an apparent shift in strategy. The brand’s London portfolio included many in-game vignettes that celebrated the triumphs, past and present, of team USA. Its Sochi portfolio, however, included a series of: 15 animated text ads that struggled to keep viewer attention. While Coca-Cola has debuted several online ads that would have had the broad demographic appeal of an Olympic audience, it instead aired a much more polarizing set of new ads, including the :30 version of the Super Bowl ad “America” (Ace Score 558). Even with its non-Olympic themed ads, Coca-Cola would not break into the top five brands.

For specific data requests or to speak to a representative, please contact Ace Metrix at creative@acemetrix.com.

Starting With Creative. Not Ending With It.