The 2015 Auto Bowl Moves into the Slow Lane 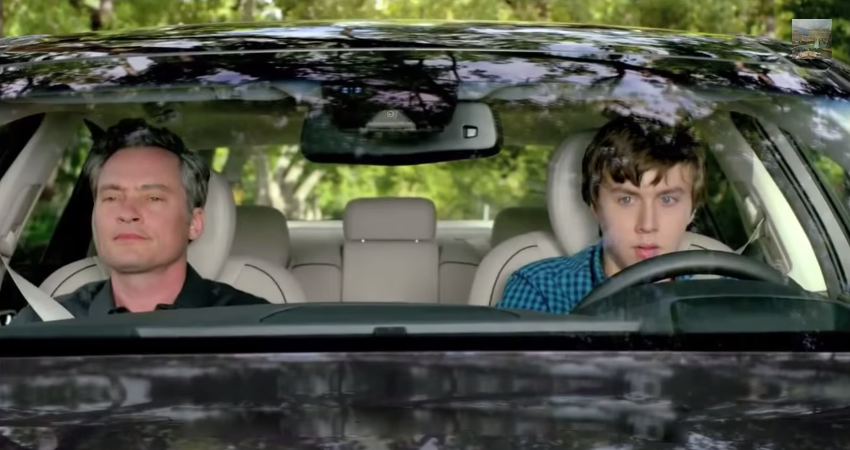 The Automotive industry has dominated Super Bowl advertising for more than five years. In fact, over the last five years, auto advertising has used over 30% of advertising airtime during the big game.

But, this year, the winds have shifted. Many auto brands are backing out of the big brand bowl. Is the Super Bowl ill timed for new model launches? Is it the fact that 30 seconds of airtime costs $4.5 million? A look at the past five years tells us how much time and money automakers have invested in making fast cars and big trucks one of the biggest components of the advertising game. 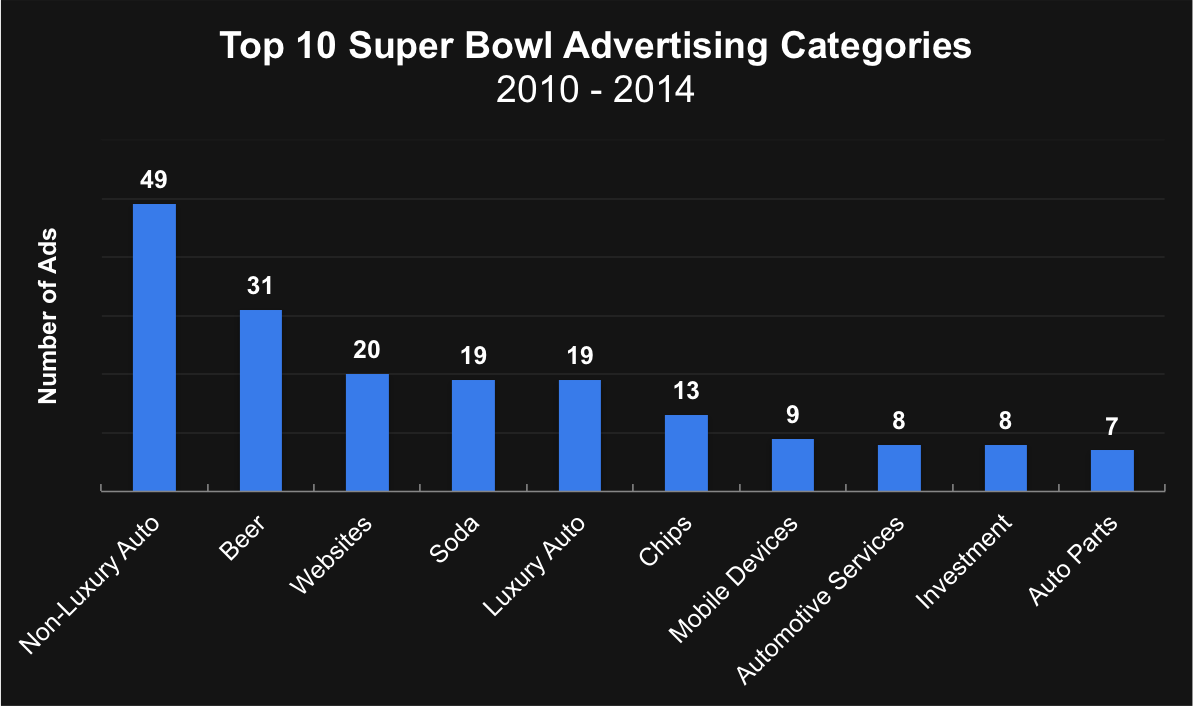 All-in-all, Automotive Super Bowl ads have represented 15-33% of all Super Bowl ads depending on the year (2010-2014). To put that in perspective, across our database of nearly 7,000 ads Ace Metrix tested in 2014, 8.7% of them were from an auto brand. The Super Bowl has consistently been a stage for automakers to showcase their latest and greatest innovations to a large group of people. 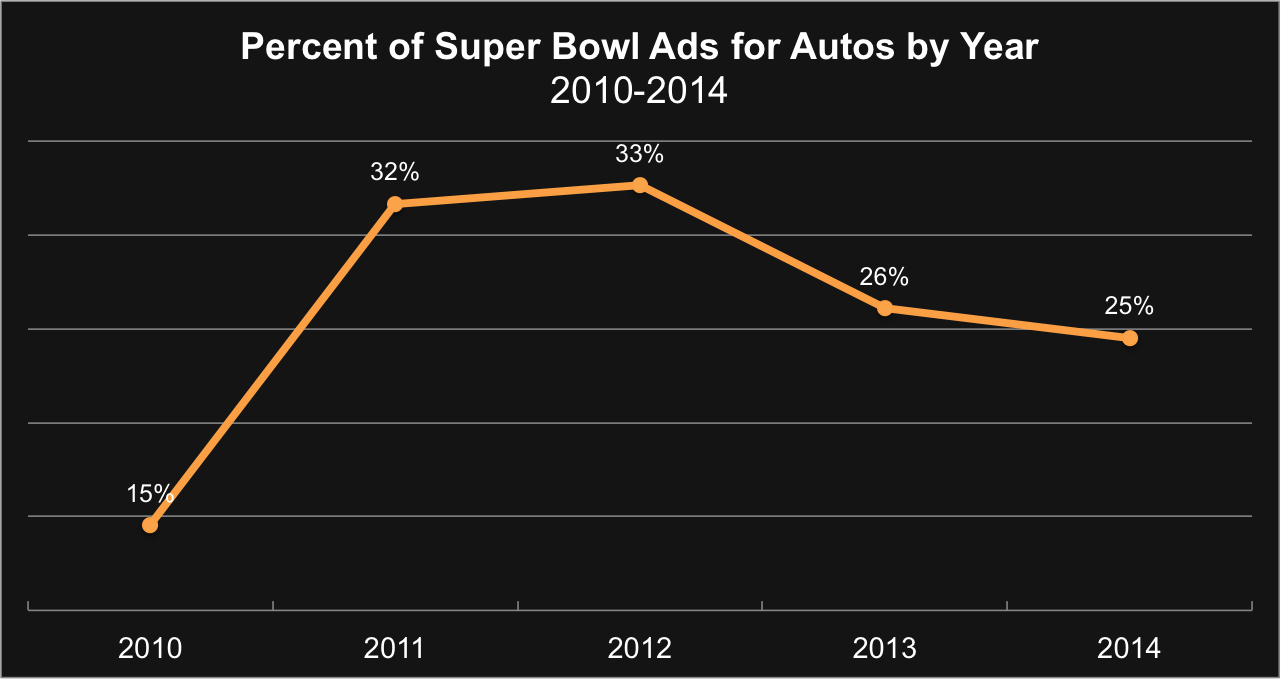 However, this year, we have heard very little from auto brands. In fact, many major auto advertisers have already said they are backing away from the Super Bowl this year. It’s been reported that General Motors’ brands Chevrolet, Buick, GMC and Cadillac are not advertising this year in addition to Jaguar, Volkswagen, Acura and Lincoln. This is especially surprising coming from Chevy, given that the brand is one of the largest Super Bowl advertisers, airing 10 Super Bowl ads since 2010. Additionally, we have not heard yet if the big, American automaker Chrysler will be driving onto the advertising field this year. Chrysler has aired three Super Bowl ads in the last five years and is currently the auto brand with the highest average Ace Score (611) of auto brands to have aired three or more ads. 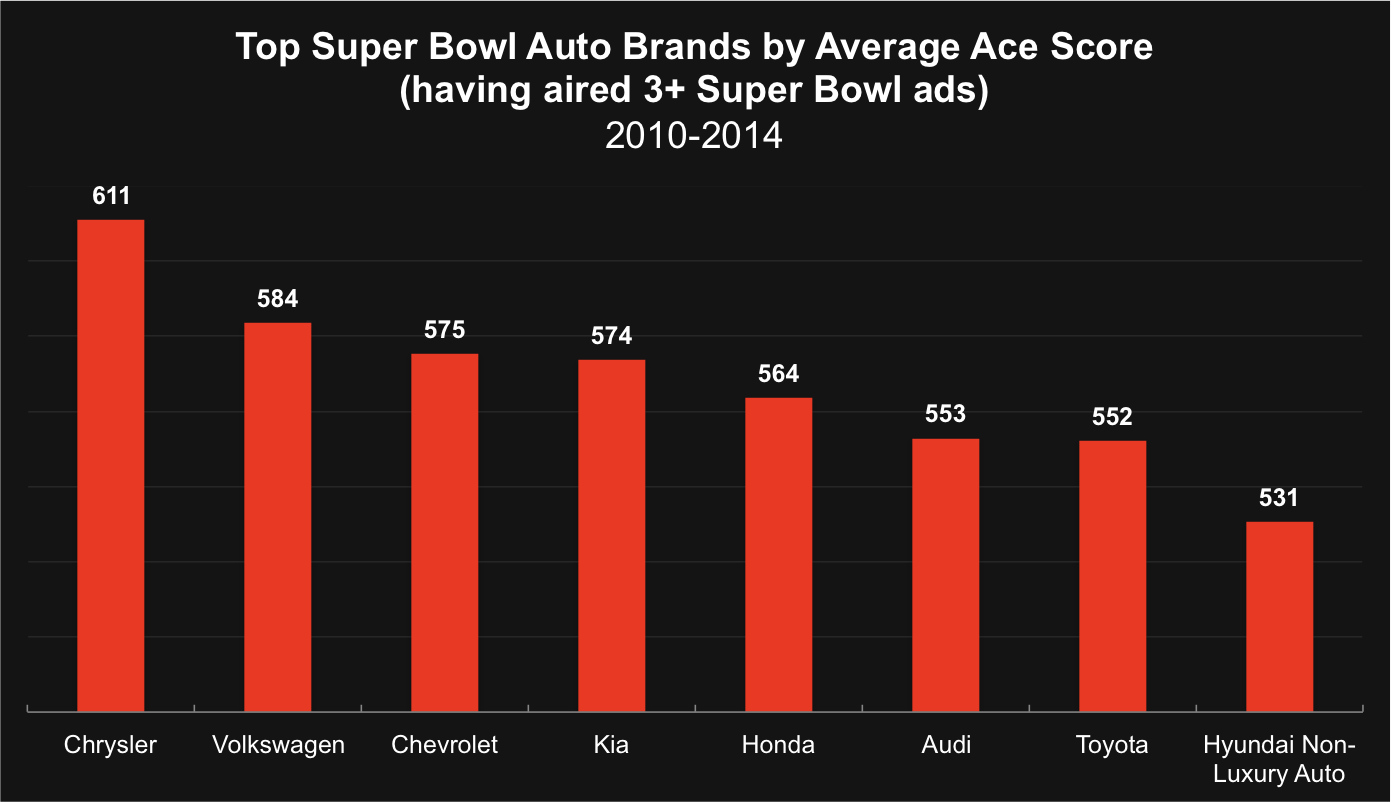 With BMW now out about its intent to air in this year’s game, there will be at least six auto brands advertising during the game—BMW, Mercedes, Lexus, Toyota, Kia and Nissan. This is comparable to 2010, when the roster consisted of Audi, Dodge, Honda, Hyundai, Kia and Volkswagen. However, this is still far less than average. Over the last five years, we could usually count on at least 10 auto brands revving their engines for the bowl game.

While most brands make public their decision to advertise, last year, Maserati took us all by surprise, airing a 0:60 spot. Despite Maserati’s sneak attack, it did not earn the highest Ace Score of all automotive Super Bowl ads last year. In Super Bowl XLVIII, Hyundai aired “Dad’s Sixth Sense,” which achieved an Ace Score of 681. The ad was not only the highest auto ad of the game, it is now the highest scoring auto ad of any Super Bowl since 2010.

Can one of the advertising auto brands this year throw Hyundai off the #1 podium? We’ll be tracking the auto bowl closely this year. For deeper insights on what revs consumers’ engines or really grinds their gears, contact us.

Cindy Crawford and Pepsi Are Still As Hot As Ever

Fans Are Thrilled Crispy M&M’s Are Back