Enough ink has been spilled over the best and worst ads of the Super Bowl – or the most “liked” and “disliked” in many media outlets. But given the depth and comparability of data we have collected year after year, we wanted to share some of the more interesting insights that can be discerned from five years of Super Bowl data. In particular, the role celebrities played in the 2014 game ads.

Celebrities have long been hired by ad agencies representing a brand’s desire to generate brand lift and associated buzz by leveraging the fame or popularity of a public icon. The Super Bowl in fact, is a common platform for which many brands invest in celebrity spots in an attempt to steal some of the spotlight from others doing the same. With the high priced stakes and extraordinarily captive audience, advertisers fall back to a common myth that their ad will be positively impacted by the inclusion of well-known icons – a myth we have addressed previously with not just one but two whitepapers.

This year’s installment of the big game was even more celeb happy than usual  with 41% of Super Bowl ads containing at least one celebrity and many upping the ante with several pop characters per spot. This represents a 10% increase over 2013. And as is true of ads throughout the year and in every other Super Bowl we have scored – celebs don’t help, in fact, as a rule, they hurt.  That doesn’t mean you cannot win with celebrities – you can but to do so you need to successfully connect the celebrity with the brand.  Disjointed endorsements need not apply – in the Super Bowl or elsewhere in the year.

Perhaps unsurprisingly, the majority of top performing ads didn’t feel the need to amplify their creative with celebs – and yet, those brands at the bottom are chock full with the glitterati. Here’s a look at a few of the celeb A listers and C listers:

Radio Shack triumphed with its 80s-era ad capturing the fourth most effective ad of the game by using a plethora of celebrities and characters from the ‘80s to effectively make fun of itself and announce a new launch of the stores. The celebrities in this case – Hulk Hogan, Mary Lou Retton, Alf, Chucky, Cliff from Cheers and a slew of other time-stamped characters – were used to parody themselves rather than to endorse the brand.  The ad scored 27% above the Specialty Stores 90 day norm and drew the expected Super Bowl one-two punch of Attention and Likeability – scores well into the 700s.  More significant though, the ad likely achieved its primary objective – the message of change for the chain ­– earning a Change score also 27% above norm. As you can see from the word cloud based on the 364 optional comments left for this ad, consumers found the ad entertaining and funny, with little mention of specific celebrities – and a healthy 24% mention of the brand.

Toyota’s “Joy Ride” ranked ninth overall and second among the auto ads in the game, scoring 15% above the non-luxury 90 day norm. Again, the 354 optional verbatim responses generate a word cloud void of any mention of Terry Crews – in fact only 4 of the 354 identified him by name. The ad successfully integrates Crews into the story rather than relies on his fame or identity to contribute significantly to the ads success. While 22% of responses mentioned the Muppets –  we find that celebrities, even when made of cloth and fur, can be polarizing. The grey color of the word “muppets” in the word cloud below identifies the mixture of high and low scores attributed to the ad from those mentioning the characters by species. 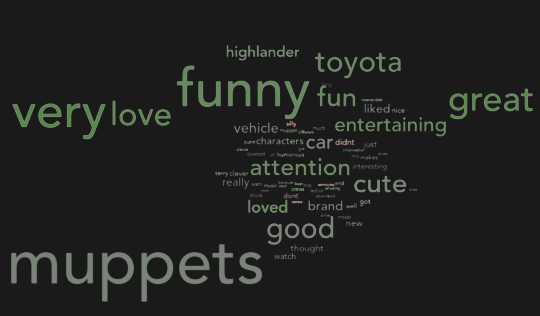 Jaguar enlisted Ben Kingsley, Mark Strong and Tom Hiddleston to poke fun at why British actors are always typecast as the bad guys in thriller movies – good choices considering viewers found the ad “cool” and said that it captured their “attention” but refer mainly to them as “actors”, many noting that they recognize them from movies but obviously such celebrities were not polarizing. 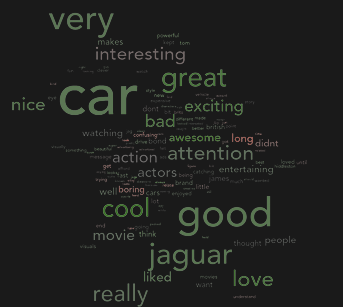 In each of the cases above, celebrities were used as actors and participants in the already well conceived creative – rather than relying on their fame to significantly contribute to delivering the message of the ad.

Other examples from this year’s game include Kia’s “The Truth” featuring Laurence Fishburne and Honda’s “Nice” featuring Johnny Galecki.

C-Lister: Bank of America “U2 Invisible”

The data shows that Bank of America struggled to connect with consumers for a variety of reasons. The ad performed 8 % below the banking norm and while it had fair Attention scores (still 4% below norm) it drew low marks for Likeability, Change and Desire. From just a small sample of the 348 verbatims we see the polarization of U2, and the confusion over the linkage between the Bank, the band and the cause.

Wonderful Pistachios chronically uses celebrities and the results are fairly consistent. This year’s choice of Stephen Colbert slightly improved the brands performance from an Ace Score perspective – coming in at 530 and 516 for the two spots – up from last year’s PSY ad which earned a 509 and 9th place on the list of least effective ’13 Super Bowl ads. However, the ads this year still underperformed the snacks category by 12% and the Super Bowl average by a full 8%. Looking at the brand’s track record, ads that featured actual celebrities generally result in bottom quintile ads (well below the category average) versus spots that feature a character such as Homer Simpson, Charlie Brown, Kermit and most recently Miss Piggy. The Miss Piggy spot actually just debuted a week before the game and as you can see from the age/gender data below, would have been a better choice for reaching the broader demographic audience that makes up the Super Bowl. Who doesn’t love Miss Piggy? 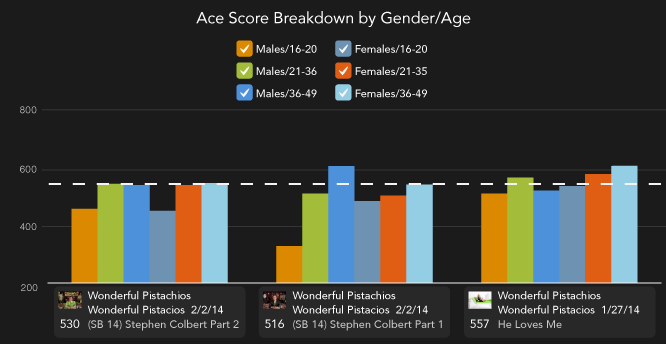 We applaud GoDaddy’s new strategy and want to point out that while both of this year’s spots landed on the bottom (“I Quit” at 7th bottom and “Bodybuilder” at 10th), the brand did improve over 2013. “Bodybuilder” is a 5% improvement over “Perfect Match” (the ad that was described by so many  our survey respondents as “gross”). “I Quit” was a 9% improvement over “Your Big Idea”, the tamer and more product-focused ad from the 2013 game. 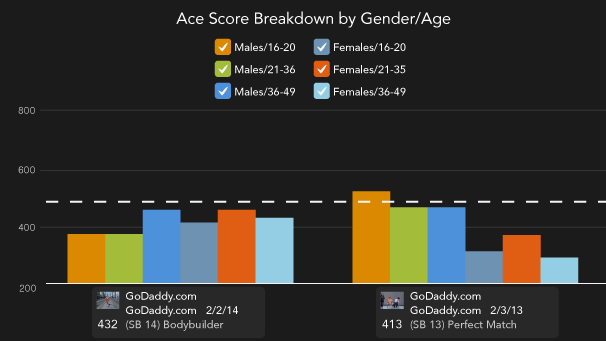 Comparing the two Danica Patrick spots from this year and last, you can see that the context of the ad matters greatly with respect to isolating a demographic. “Perfect Match” found it’s sweet spot with males 16-20 but failed to connect with men of drinking age and further angered (as evidenced in the verbatims) women of all ages.  Considering that between 1997 and 2013, the number of women-owned businesses increased by 59 percent, (not to mention women make up 46% of the Super Bowl viewing audience) this is a group GoDaddy can’t afford to offend. Selecting a woman entrepreneur to feature in their second spot this year – and focusing on a story that attempts to better describe what the company does was a good choice.

Now…let’s change gears and take a look at the effectiveness of humor in Super Bowl commercials!

For more information on the “The Impact of Celebrities in Advertising” download the paper or contact us to discuss a particular case of interest.

Were You Looking for a Laugh During the Big Game?