“The Office” Cast Makes a Comeback (in Ads)

Seven years ago, on May 16, 2013, the series finale of NBC’s hit documentary-style show The Office aired. Three months ago (or what feels like years in pandemic time), there was a spike in cast members from The Office making a comeback – but this time alongside brands, working with them to promote products across a variety of categories with three revolving around the Super Bowl.

Although these ads from 2020 don’t follow the same mockumentary style footage that viewers grew to love (with Panera Bread being the exception), many still contain the same great tongue-in-cheek humor that comes with simply seeing a familiar face from The Office. Not to mention, they’re still much better than Michael Scotts’ shoddy yet unironically optimistic attempt at making a local ad for Dunder Mifflin.

While the use of celebrity can be fraught, these ads created a positive affinity in viewers’ eyes through humor, regardless of whether or not the intended audience recognized the featured stars.

This ad shows clear ties to arguably one of the more iconic scenes from The Office where Kevin (played by actor Brian Baumgartner) spills his famous chili. It’s a very funny scene, to say the least, but also sad seeing one of the things that Kevin is most proud of go to waste in such a Kevin-way.

This ad, featuring a mini cooking tutorial led by Baumgartner, nailed it by scoring into the Strong band of signal on our Funny metric, tying with “Best Thing Since Sliced Bread” as the funniest of The Office ads. On top of that, it received a Solid score on Love It, indicating that viewers showed enthusiastic adoration for the character along with the Bush’s Beans/ad itself: 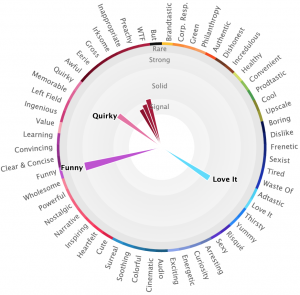 Baumgartner’s ad also tied with Hyundai’s “Smaht Pahk” (mentioned below), with 58% of viewers showing improved purchase intent after watching the ad (vs. the 46% Staples Category norm) – making the Bush’s Beans and Hyundai ads the highest on this metric. This Bush’s Beans ad also performed very well in regards to our effectiveness measures, with above-norm scores across the board:

Seeing Stanley Hudson (played by actor Leslie David Baker) taking care of his heart health with Honey Nut Cheerios sparked a variety of positive emotions amongst viewers. Whether or not they were familiar with the character known for having heart issues in The Office, the success of this ad was really in its ability to showcase the product in an attractive and friendly manner: 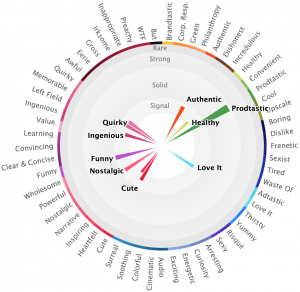 This ad also resulted in about 4% of viewers mentioning Stanley by name, showing a clear recognition of character. Even for viewers that may be unfamiliar with the show or may not exactly remember the character’s name, the chemistry between Cheerios’ zestful brand mascot Buzz and Stanley’s stern way of communicating served the audience with a highlight of what this product is all about without relying on them catching the subtle reference.

“Smaht Pahk” debuted during Super Bowl LIV and featured a slew of very well-known celebrities, ultimately becoming the highest-scoring Super Bowl LIV ad with an Ace Score of 738. Alongside Rachel Dratch, Chris Evans, and David “Big Papi” Ortiz, this ad featured John Krasinski (The Office’s Jim Halpert) as himself. Krasinski rose to fame as one of the main stars from The Office, infamous for the amount of pranks he pulls on Dwight and the seemingly infinite perfect looks that he gives the camera.

With the overall production quality (Super Bowl status) and product-centric storytelling in “Smaht Pahk”, it’s no surprise that Krasinki, along with the combined star-power of the other celebrities, made for an extremely successful ad across all Component scores against 180-day Auto-Industry norms and generated a slew of emotional reactions: 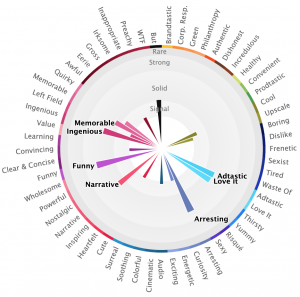 It should be noted that while Jim might have been the king of the pranks, he didn’t win the LOL war with Dwight. While “Smaht Pahk” scored a Solid 5.5 on Funny, it was no match for Rainn Wilson’s Little Caesar’s spot.

Fans absolutely love Dwight (played by Rainn Wilson) for all the shenanigans that he gets into, while others may think that some of his hobbies are just way too random to wrap one’s head around (ahem, things like bears. beets. Battlestar Galactica). Nonetheless, Rainn Wilson is able to achieve a career goal in this Super Bowl ad that Dwight (Assistant to the Regional Manager) could only have dreamt of – CEO of the Sliced Bread company.

Not atypical to Dwights’ behavior, this Little Caesar’s spot shows havoc wreaking throughout the Sliced Bread company with Wilson’s executive character at the helm as things begin to fall apart for him and the business. Some of the highest Emos that fired in this ad included Funny (tied with Kevin’s appearance in the Bush’s Baked Beans ad and ranked among the Funniest Super Bowl LIV ads), Surreal and Curiosity – similar to other ads starring actors for The Office: 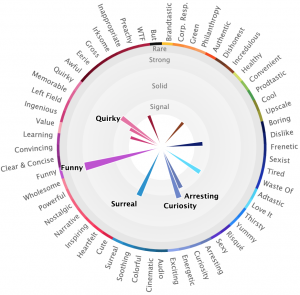 Phyllis Vance (married to Bob Vance of Vance Refrigeration) is played by Phyllis Smith and is known for coming off as the soft-spoken and motherly-like character throughout the show. The mockumentary-style footage from The Office carries over to this Panera Bread ad along with Phyllis’s personality traits. Instead of being the sales representative for Dunder Mifflin, she’s the Social Media Coordinator for Panera Bread tasked with monitoring all the mean social media posts from consumers wanting French Onion Soup to be brought back to stores.

“Panera hires Phyllis Smith” successfully emulated the humor from the show, with viewers largely connecting with that emotion in the ad:

“I really enjoyed this ad. I liked how they made a lack of a much requested product into a comedic ad and announced that the French onion soup is available now after many requests. It got my attention because I love the show The Office and seeing the character Phyllis in this ad made it relatable and funny.” Female 16-20

“I loved that they had Phylliss from the office reading mean comments from panera customers i thought it was hilarious.” Male 16-20

“I LOVE THE OFFICE! I really enjoy seeing Phyllis outside of Netflix. It captivated me to stay and listen to the commercial!” Female 16-20

Saving the worst (according to Michael Scott) for last* is FOX’s Super Bowl promo ad starring Toby Flenderson. All jokes aside, the actor that plays Toby (Paul Lieberstein) also happens to have been a writer, director, producer and showrunner on The Office. Much to Michael Scott’s dismay, 28% of viewers chose Toby as the Single Best Thing about the ad (vs. the 180-day 10% Entertainment Industry norm).

Lieberstein’s character in this ad mirrored Toby’s HR representative persona with his formal and often seemingly emotionless/overly calm demeanor. Although the response to this ad indicates there was general confusion of the concept (staying home from work the day after the Super Bowl), viewers still connected with the Office-like comedy.

The humor landed well in these ads regardless of whether viewers were fans of the show or simply unaware of who the stars were in these ads. It’s safe to say that if a brand is attempting to strike a Funny chord with viewers, casting a member from The Office can go a long way when done right.

How Wireless COVID-19 Ads are Faring

Is a Sense of Sameness Plaguing COVID-19 Ads?