Unconventional approaches that revolve around music, mascots and mutts generate the most laughs in Q2

Most of the brands on Q2’s list are seasoned in leveraging humor to engage viewers. In fact, this is Geico’s second quarter in a row making the list — the brand even took two spots while doing so. On top of that, M&M’s Super Bowl 52 spot was one of the funniest ads from 2018. With that said, there are two first-timers among the top five: Ladder and Spotify.

The following list is based on our Funny metric. Scores measuring the strength of emotional connection are passively derived by applying NLP and machine learning techniques to voluntary viewer verbatim comments.

The heat map below reveals viewers also found the funniest ads to be unconventional with signal seen for the following metrics: Ingenious, Left Field, Memorable and Quirky. On top of that, some negative emotions were present like Eerie, Irksome and Mean. But the overall strength, represented by the lighter shade of orange, was minimal compared to Funny indicating less viewers felt these emotions.

This past quarter, two in three ads from the Candies & Snacks industry connected with viewers through humor, with Cheetos and M&M’s standing out the most from the pack. Both creatives featured their long-standing mascots — Chester Cheetah & M&M’s Spokescandies — which created a sense of nostalgia. Cheetos “Cheesy Snack” was more polarizing than M&M’s “New Spokescandy” because viewers felt the Surreal humor was either Cute and Quirky or Eerie and Irksome (as evident in the heat map above).

First of Geico’s ads among the Funniest, “Believe It” delivers the brand’s “saving money” message in an entertaining manner, with Breakthrough and Watchability being the strongest aspects of the ad. However, the spot fell short on conveying new information, instead coming off as “Tired” and contributing to 58% of respondents reporting no change in Purchase Intent.

The relatable humor in Spotify’s “Singalong” merged well with the product as both our Audio and Funny metrics indicate those two aspects impacted viewers the most (represented by the size of the bars in the Emo plot below). 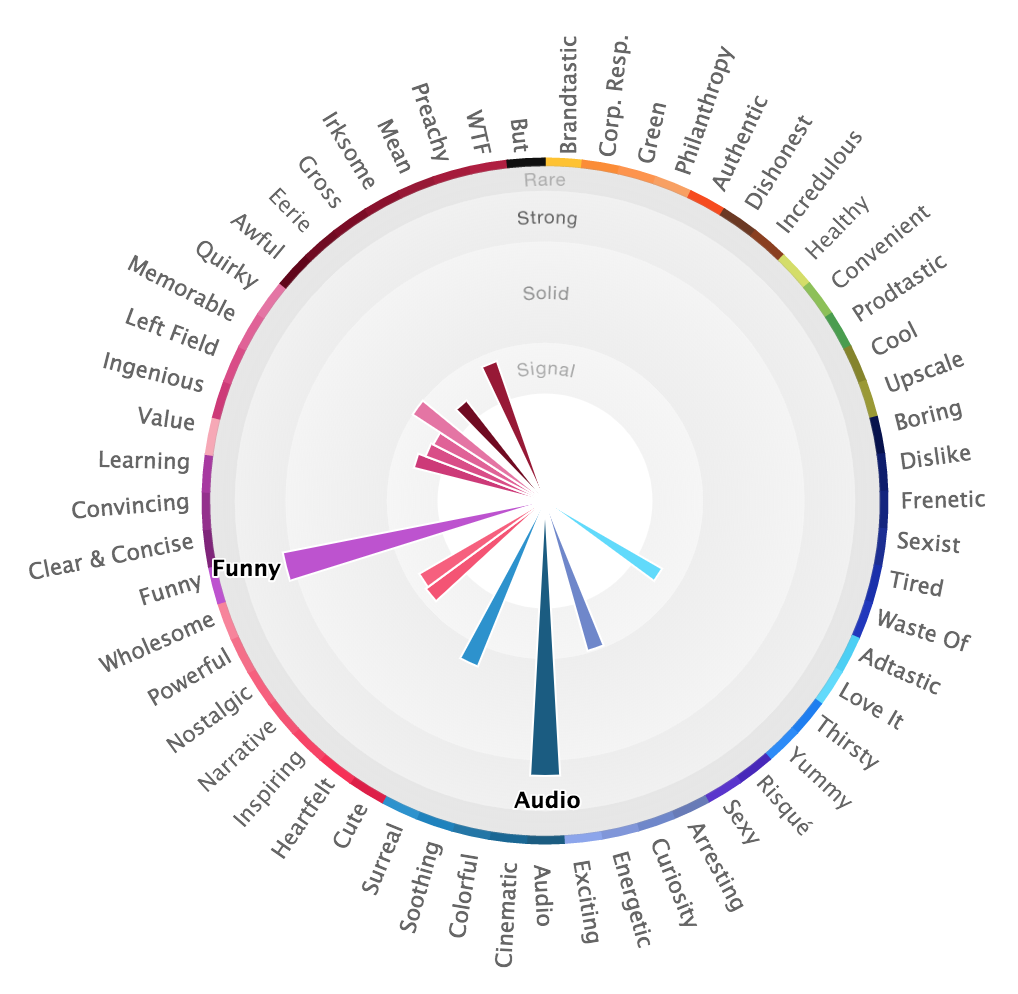 One of its first ads since its launch in November 2018, Ladder harnessed the star power of some of its founders to generate laughs and build interest in the product. Aside from humor, “Lebron x Arnold Workout Playlist” sparked Curiosity among viewers, who were either intrigued to find out what was being advertised or were left wanting to know more:

“The overall production was done well. After seeing this ad, I’m curious enough to research this product.” Male, 21-35

“so funny ! really liked the humor. insufferable millennial, arnold, dj khalid, a polka band, what not to like? never heard of ladder protein(is it a drink or a powder?), but i will research it.” Female, 50+

“I liked that this took a turn I wasn’t expecting, which is often hard to do in a commercial where just about every variation has been done. The initial guy working out was just over-the-top enough, and then going from Arnold then to LeBron kept raising the stakes so I was legitimately interested to see what the ad was for.” Male, 36-49

“The ad was funny, it definitely got my attention and I was interested to find out what product was actually being advertised. Unexpected!” Female, 21-35

Rounding out the Funniest list, Geico put its signature quirky humor to work in a PSA-style spot advocating against distracted driving. The adorable dogs helped drive Breakthrough capability (Attention and Likeability components) but did not completely distract from the Relevant Message, which almost tied with Characters as the Single Best Thing about the ad.

However, while the ads above represent the Funniest from the past three months, not one creative from 2019 has achieved rare levels of humorous connection with viewers (scoring 9.0 & up). With the rise of social stance ads in recent years, more brands are trying to establish their purpose, perhaps at the expense of humor. On top of that, the current political climate and social media mobs have brands afraid to take the risks that sometimes come with universally funny ads. Reasons aside, if this trend keeps up the next six months it’ll be two years in a row where ads are just not as funny as they could be.