Video advertising hit on all fifty-seven of our emotional metrics in 2019, allowing us to measure the unique reactions of viewers throughout the year. We are recognizing the top ten funniest and highlighting the different ways humor played a positive role in advertising last year.

Our Funny metric is one of fifty-seven from Ace EMO, which measures the strength of emotional connection in advertising. Scores are passively derived from voluntary respondent verbatim comments using Natural Language Processing and machine learning analysis. Funny picks up on any phrases close or related to ones like “lmao,” “hahah,” “hilarious!” and “made me laugh,” including synonyms, misspellings, and anomalies.

With over 8,400 video ads analyzed in 2019, and over 3 million viewer comments, the following ads distinguished themselves by achieving the highest quantifiable level of humor — Congrats!

*Breakthrough capability (a combination of Attention and Likeability components) was used as the tie-breaker for fifth, seventh, and ninth place.

The funniest ads were packed with Breakthrough potential as they all achieved above-average Attention and Likeability scores, providing evidence of humor’s ability to entertain the masses.

As part of Pandora’s “Be You” campaign, “Afternoon” hit it big, landing on top as the funniest ad of 2019. This ad features a man donning a thick mustache just being himself, jamming out to Normani’s “Motivation” in his front yard while some of the neighborhood locals watch him in awe. This take on humor (as well as the combination of other emotions) resulted in 54% of all viewers showing positive purchase intent for Pandora.

“Afternoon” struck viewers with a rare level of Funny (achieved by only the top 0.3% of ads) and evoked solid signals of Curiosity, Ingenious, Quirky, Audio and Surreal. Other notable emotions evoked include Love It, Arresting and Memorable. The polar bar chart below provides a visual of the “Afternoon” emotional profile: 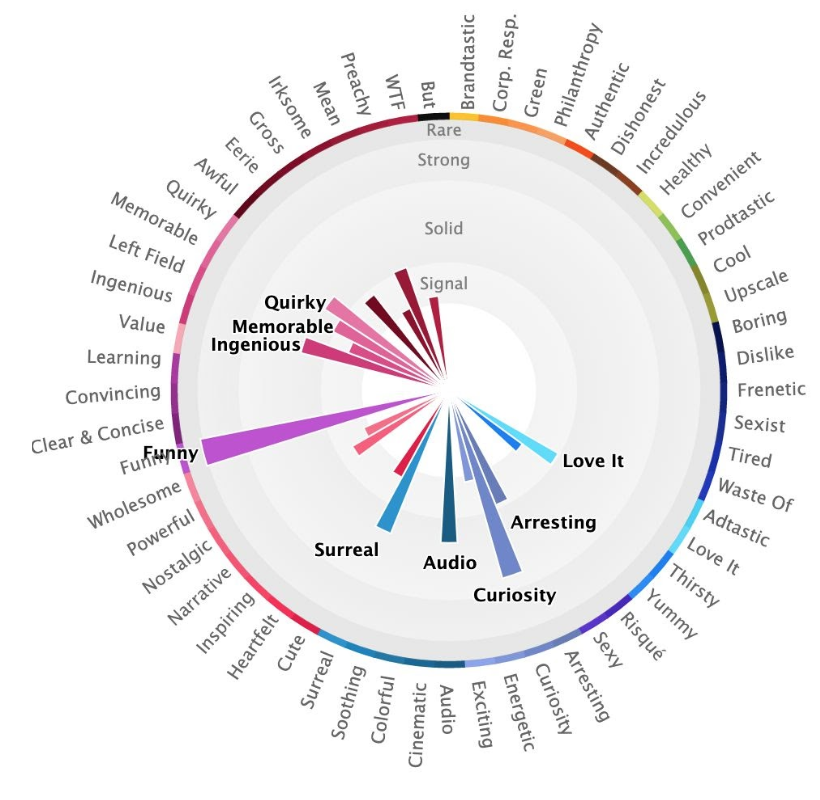 To add to its emotional success, last year “Afternoon” ranked as the most Attention-getting of all ads in the music streaming category and placed second in Likeability.

In the Ace EMO Heat Map, the dark orange indicates just how strong the humor settled with viewers. There was also signal on more Unconventional emotions (Ingenious, Left Field, Memorable, Quirky) indicating the humor used made a lasting impression on viewers.

Humor is not universal. What a teenager laughs at might dismay her father and vice versa, so we tend to see that some negative emotion comes along when Funny is strong. These ads were no different with emotions like Irksome, Eerie and Sexist firing for some of the ads. With deeper examination, the more negative sentiments sometimes stem from a particular audience segment.

Across the majority of the ads in this list, the Characters won out as Single Best Thing selected by viewers. Allstate’s Mayhem character led the charge with 39% of viewers choosing his trouble-making house cat persona as the best thing about the ad. Following that at 36% was Amazon Echo’s “My Order,” which featured the Likeable Harrison Ford and his disobedient dog ordering an entire pallet worth of dog food. M&M’s and Tecate Light took up the following two spots with the characters as the Single Best Thing.

Although there were many positive attributes among the ads in the above list, Tecate Light’s “The Boldest Six Pack of All” fired signal of 3.4 on our Sexist metric, particularly among Women ages 36-49: 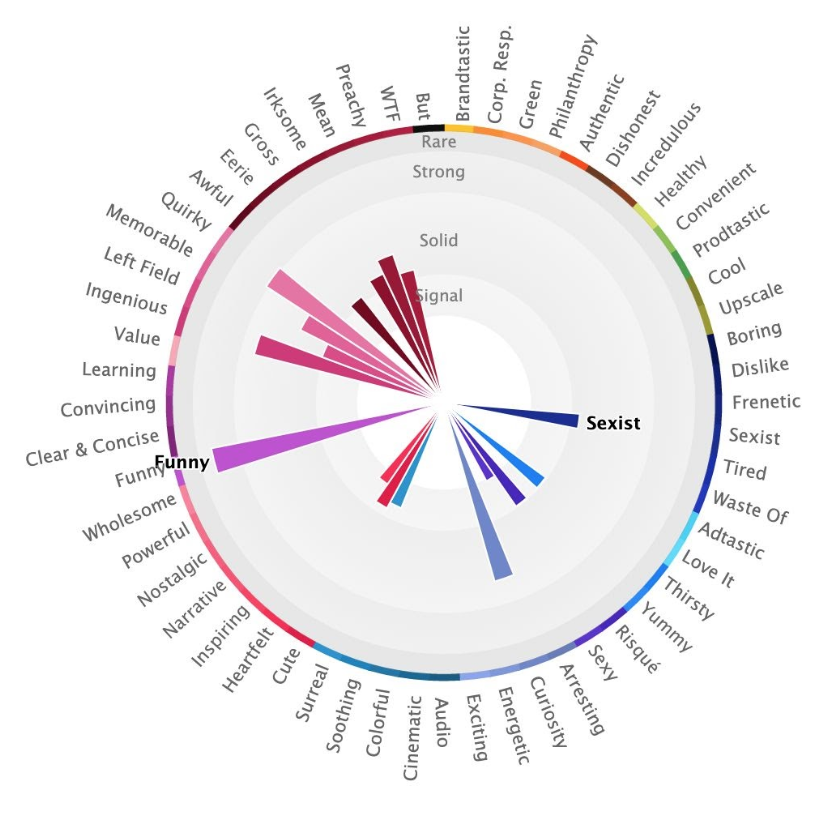 This set of ads evoked a wide array of emotions, with Funny reigning supreme. Humor in advertising can sometimes leave a bad taste in viewers’ mouths, but when done right, it can really capture the viewer’s attention.

Congratulations to the Funniest ads from 2019!

The Best Storytelling Ads in 2019