Television ads are not going away. Despite the growing proliferation of non-traditional viewing options for consumers (Netflix, Hulu, Amazon, etc.), network television is still alive and well. While budgets continue to shift from broadcast TV to digital, it seems the demise of commercials is not imminent. That said, brands and networks must seek new ways to innovate to grab and hold viewers’ attention. One great way to keep viewers from skipping through ads is to use them in live events

In addition to live sporting events and major award shows, some networks are creating their own must-see live events. Rather than just running any old ad in a live event, the innovation is to run a live ad that appears to be part of the content itself. A classic case of what’s old is new again, this format is straight out of the early days of television. Back then, advertisements were live reads from the announcers, hosts, actors and actresses in a program. During NBC’s broadcast of Hairspray Live! last week, three advertisers aired live ads – Oreo, Reddi-Wip, and Toyota. Ace Metrix looked at how this approach fared in comparison to other ads put forth by these brands, and it appears to have paid off. For the most part, viewers of Hairspray Live! enjoyed the tie-in to show from these brands.

What we are talking about here are ads that are created specifically for, and become a part of, a particular show or event. These ads are viewed as an extension of the programming content. It is not simply a matter of what show an ad is run — in fact we proved in a separate study that regular, interruptive TV ads perform the same regardless of the show they air on. For the unique ads performed live within Hairspray, we see very strong performance with viewers of the event. Below we see how, on average, these live ads score higher in key measures than all other ads. 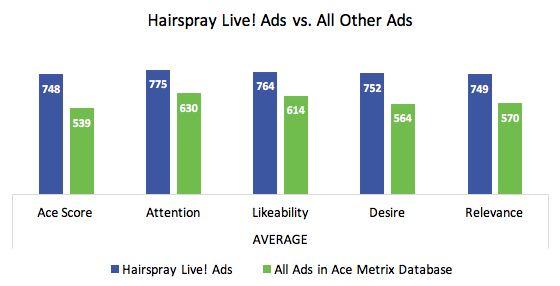 Reddi-Wip took the biggest risk, buying a full minute of live air time for their spot featuring a milkman who extols the brand’s virtues behind the scenes of the show. He tops off crewmembers’ coffee with whip cream and dances with a member of the cast. Among viewers of the entire Hairspray broadcast, Reddi-Wip saw the most impressive scores. Viewers of the live event gave the ad an overall score of 791, nearly 31% above its category norm, and higher than that of any Reddi-Wip ad of the past two years.

Among those who watched the broadcast, the spot was a strong driver of Desire, and was found Relevant, Informative, and Likeable. It also demonstrated remarkable watchability and attention-grabbing capacity. The double dose of nostalgia – a live ad and a milkman – worked here. One female viewer aged 50+ commented, “This was a clever ad placement within a live TV musical presentation representing the early 1960s. The product has been around since I was a child and possibly longer, so it was appropriately placed and represented.”

Hairspray Live! sponsor Oreo also fared well with their live spot, “Teen Dance Show.” People who watched Hairspray gave it an overall score of 746, higher than the general population scores for any other Oreo ad of the past two years. It also topped the average for all cookie ads in that timeframe by 22%. Similar to Reddi-Wip, the visual scenes (26%) and brand (23%) were named the best things about the ad.

The live Oreo ad featured one of the stars of the show, Derek Hough, enjoying dunking an Oreo in milk during a break. This piece of branded content, with a product placement feel, garnered even higher scores among women viewers (769 vs. 732 for males.) Demonstrating the ad’s entertainment value, one woman (16-20) commented, “it was fun, quirky, and cliché in an overly obvious way. very entertaining.”

Toyota’s celebration of the Corolla’s 50th anniversary rounds out this set of live ads, and was also highly regarded by Hairspray viewers. They gave the uber-retro spot an overall score of 707, which is 29% above the Toyota average for all ads of the past two years. It’s also 26% above the Non-Luxury Auto category norm. Among this group, Desire and Relevance were strong, as was the informative nature of the ad. Once again, the visuals and brand drove the creative success, named the best thing about the ad at 30% and 26% respectively.

To be fair, we are only talking about viewers of the show here.  These ads aren’t designed to stand alone, and the data confirms that. Among people who didn’t watch the show, the ads made little sense, and scored poorly — well below each brand’s traditional levels.

If this version of what’s old is new again is going to be an ongoing trend, it will be interesting to see if more live program content emerges to support live advertising tie-in opportunities. The Hairspray Live! ads show that brands can successfully integrate with program content and drive consumer attention and engagement. There are risks — it is an expensive proposition to produce an ad for an event of this magnitude for one impression. Plus, lets not forget, anything can happen on live TV. Lastly, there is no guarantee live events will deliver the predicted audience, as recent ratings have shown shown. What we do now know is that viewers respond to live ads favorably, and brands may find the risk is worth the reward.

Note: Scores are for those who viewed the entire broadcast of Hairspray Live!