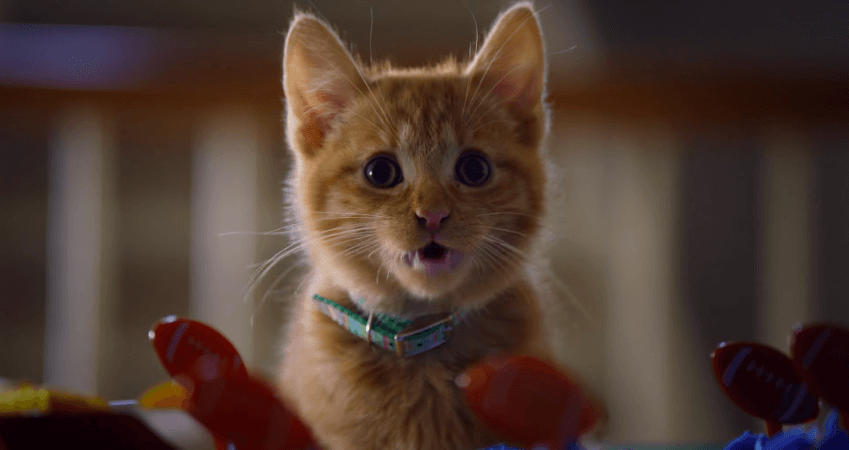 Each month the thinkwithGoogle site posts its YouTube Ads Leaderboard, which showcases the ads with the most views in each month. For over a year or so, we’ve taken a look at those lists to provide some insights as to how the ads perform against a representative general population audience. By definition the ads posted to these lists include paid views, organic views and audience retention (how much of a video people watched). Increasingly, the content is disproportionately short film items versus the branded ad content it used to be. Regardless, here’s a look at some of the most viewed video ads for January and how said ads would perform with a more diverse audience.

While we have the scores for several of the ads on the leaderboard, here are seven of the most popular YouTube ads for January. Interested in how the other ads performed from an Ace Metrix perspective? Contact us, and we’d be happy to discuss the details with you

After being on YouTube for just four days, Budweiser’s “Lost Dog” managed to accumulate millions of views, making this adorable spot the second most-watched ad for all of January. Continuing Budweiser’s #bestbuds campaign, “Lost Dog” tells the story of a puppy who gets lost and nearly reaches home, only to encounter one last obstacle. Much like the other #bestbuds viral ads, “Lost Dog” shared similar success when scored by consumers on our platform. “Lost Dog” earned an Ace Score of 652, which is an impressive 27% above the 12-month Beer category norm. Consumers also awarded the Super Bowl ad second place among all Big Game ads for this year.

While beer ads usually perform quite low among non-beer drinkers, “Lost Dog” managed to score above norm regardless of beer preference. Across beer drinkers, however, those who had recently enjoyed flavored beer awarded the ad its highest score of 715. Likewise, those who are a fan of domestic, full-calorie beers—like Budweiser—awarded the ad an Ace Score of 706. 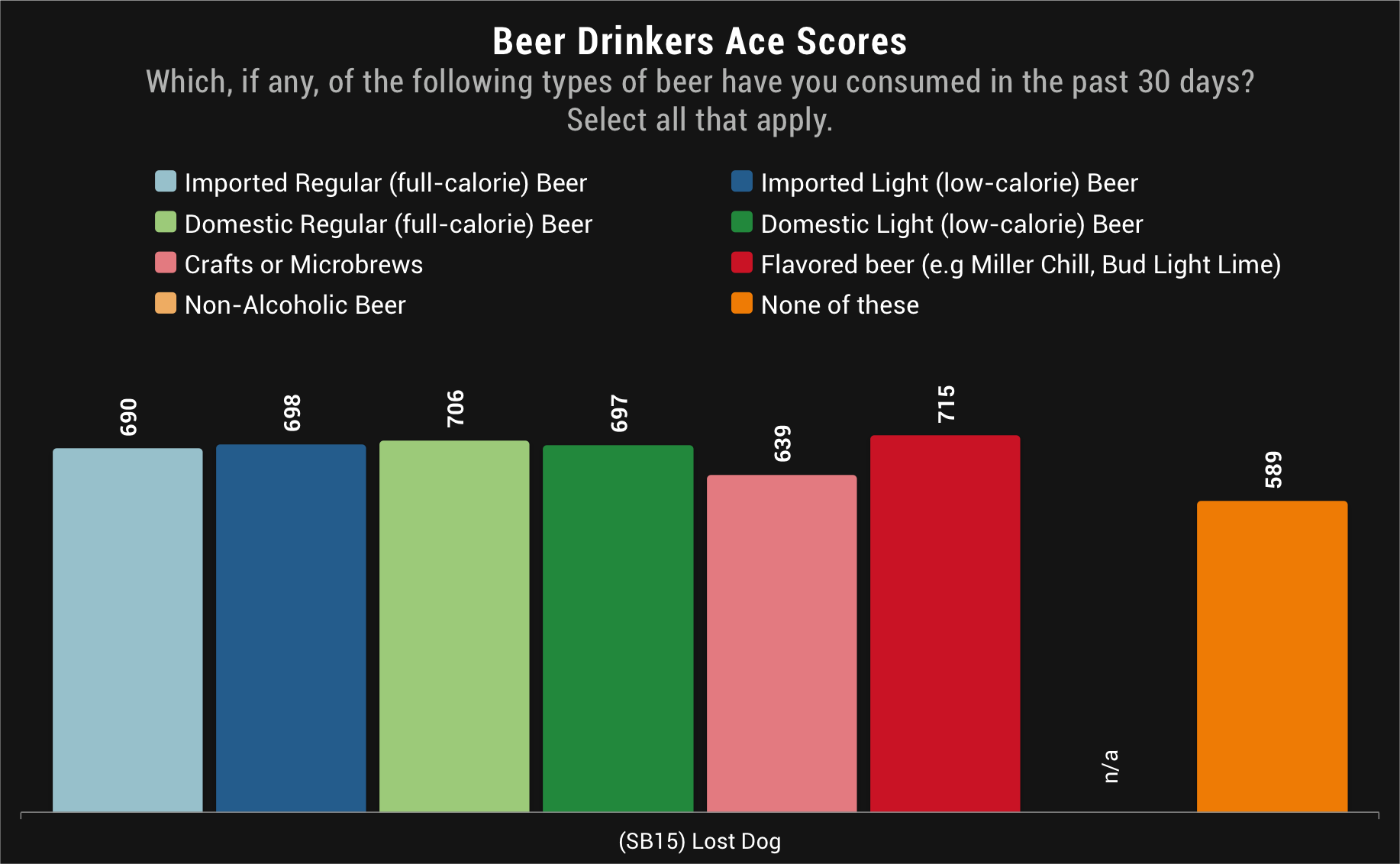 Now, some weeks after the ad first debuted online, “Lost Dog” has racked up over 27 million views on YouTube alone. Much like the beloved Clydesdales the adorable puppy is now becoming more of a staple in Budweiser’s advertising repertoire.

Love her or hate her, if you watched the Super Bowl this year, you likely got to see Kim Khardashian West in T-Mobile’s Big Game ad “#KimDataStash.” The 30-second spot earned millions of views online, debuting just six days before the end of January. The ad uses self-deprecating humor as Kim explains that having rollover data means you’ll have more data to view her selfies and, of course, her outfits.

While the ad achieved one of the lower Ace Score among Super Bowl ads, a score of 423, consumers who found Kim to be the best part of the ad (20% of those surveyed) awarded the ad a score of 569. Likewise, those who thought the T-Mobile brand was the best part about “#KimDataStash” awarded it an above-norm score of 584. 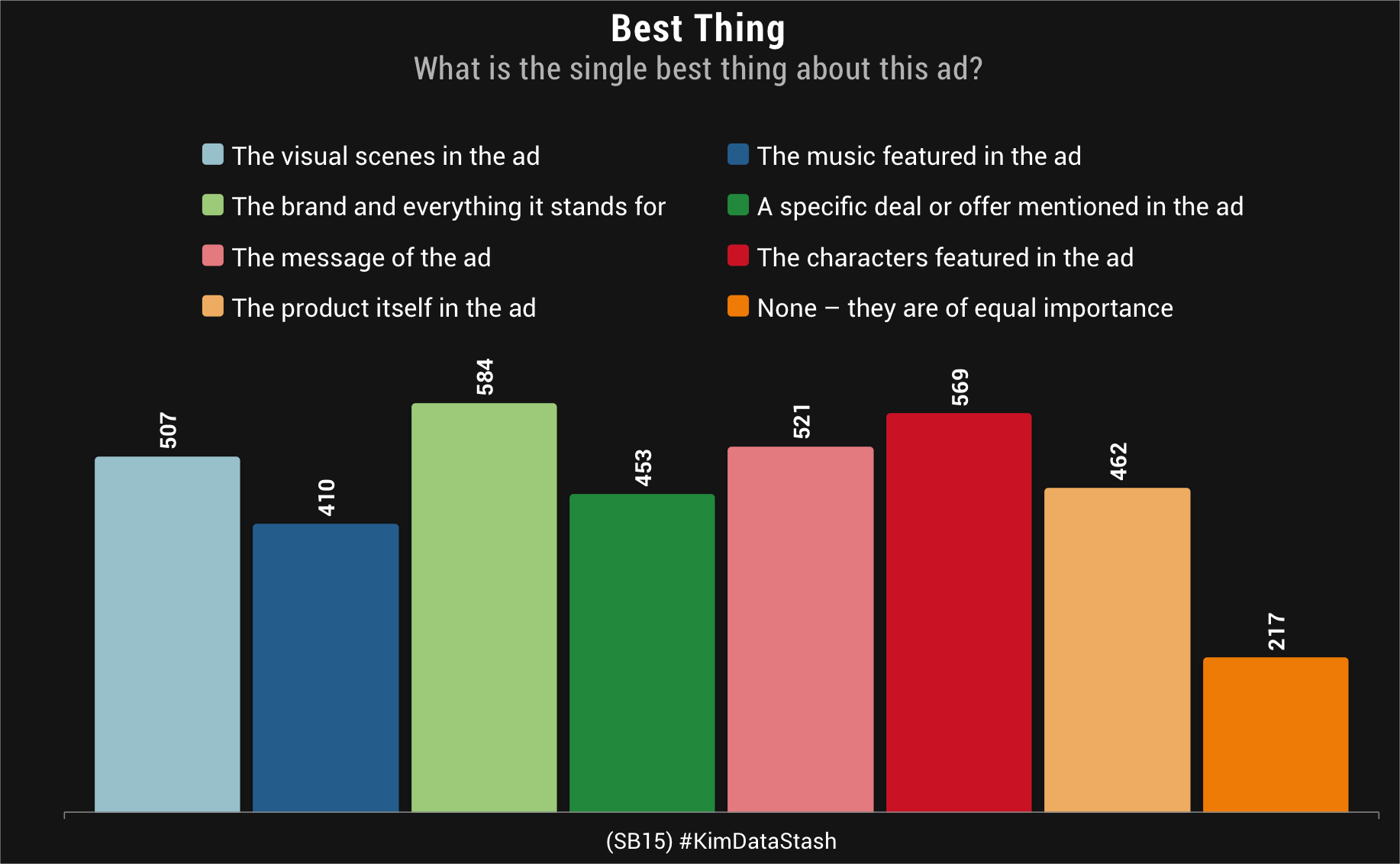 And, likely even more importantly, a majority of consumers (54%) said they would take some action after viewing that ad, whether it was talking about it with a friend or looking into T-Mobile’s services. 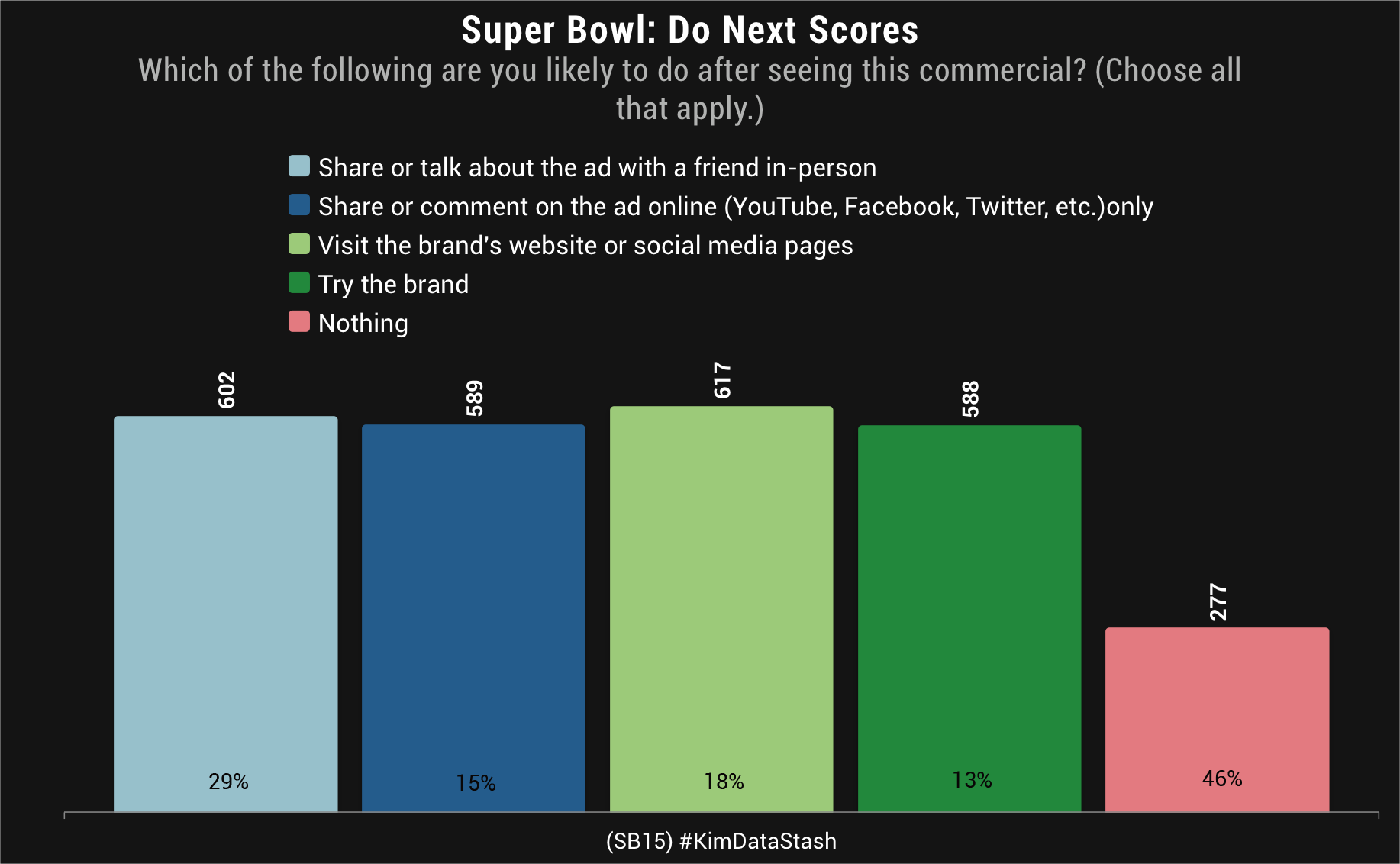 Kim is, no question, a polarizing celebrity, but there’s also no doubt that she can draw a crowd–getting consumers to comment on her newest commercial on YouTube or talk about the ad with friends during the Super Bowl.

Have you ever seen a new technology and asked, “Am I living in a futuristic sci-fi movie?” After watching Microsoft’s ad for its ground-breaking technology in the HoloLens, it’s hard not to think that. Many are speculating that the HoloLens is a response to Google’s Glass project, and many others are asking, “Is this where technology is headed?” The two-minute ad showcasing the new Microsoft product earned an astounding Ace Score of 722. While this ad did not air on TV, if it had, it would be one of the highest scoring ads among the thousands of ads we’ve tested.

As we would expect, it’s the HoloLens that really stole the show. Twenty-nine percent of consumers said the ad’s product was the best thing about the ad while 30% countered that it was the futuristic visual scenes of what the HoloLens is capable of. 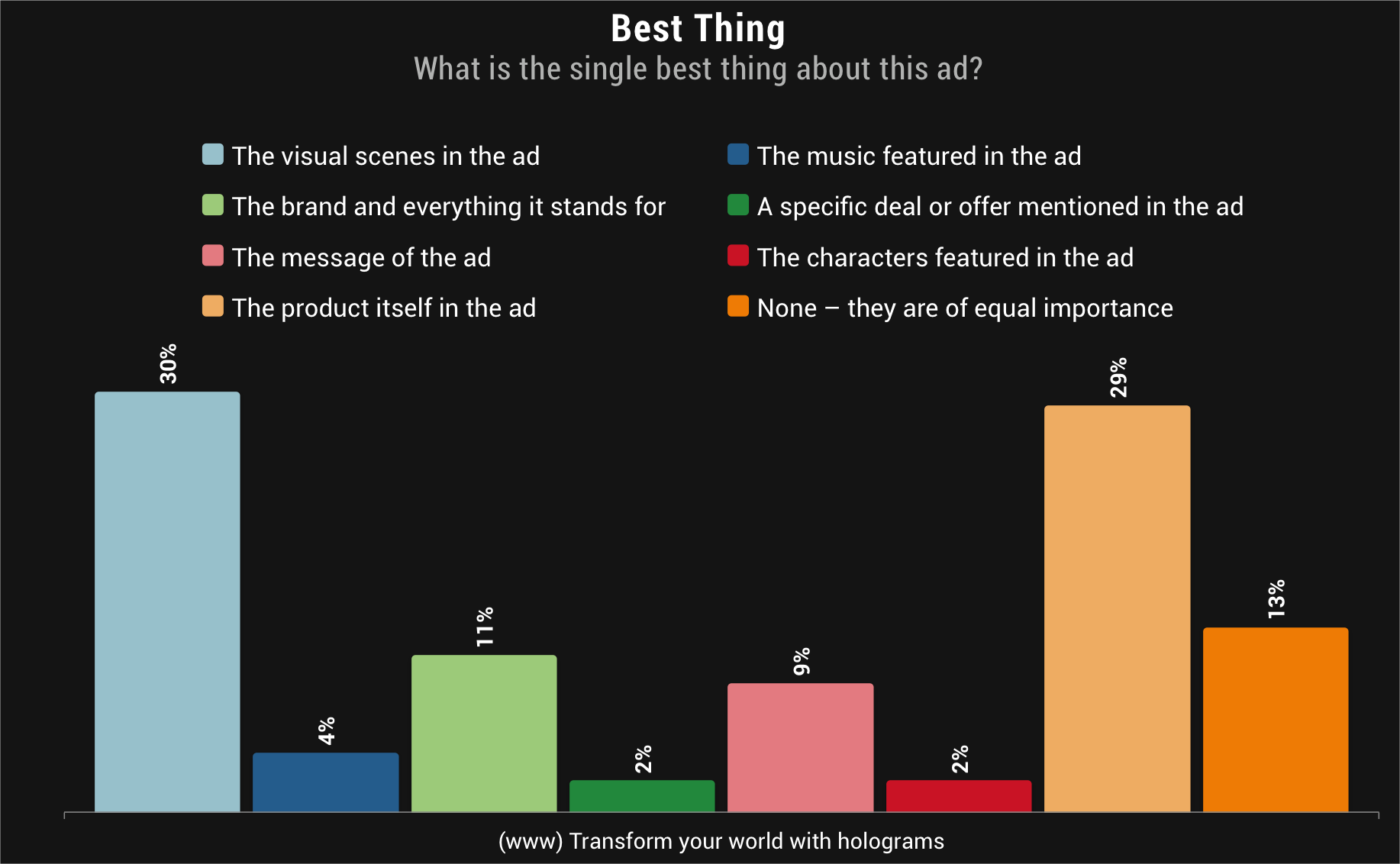 With the product being the standout winner in the ad, taking a look at the component chart below, we can see what aspects of the ad especially resonated with consumers. The ad strongly communicated the value of the HoloLens, earning exceptional scores in terms of Information and Change, which led to a Desire score of 750, which is 26% above the norm for Computer Hardware ads. There’s no doubt that after watching this ad consumers said, “I want that!”

BMW brought in celebrities Katie Couric and Bryant Gumbel for its Big Game ad. Much like the other Super Bowl ads on the Leaderboard list, “Newfangled Idea” was able to garner millions of views just days before the month of January came to a close. The clever spot features the popular talk show hosts, comparing the coming of the internet to the creation of the new, electric BMW i3. The ad earned an Ace Score of 620 among the general population of viewers and an Ace Score of 639 among an augmented set of consumers.

While the ad scored 15% above the 90-day Luxury Auto norm overall, women especially found the ad especially interesting and funny, awarding it a score of 659. Interestingly, among women, the ad skewed younger with women ages 21-35 scoring the ad the highest, an Ace Score of 689. 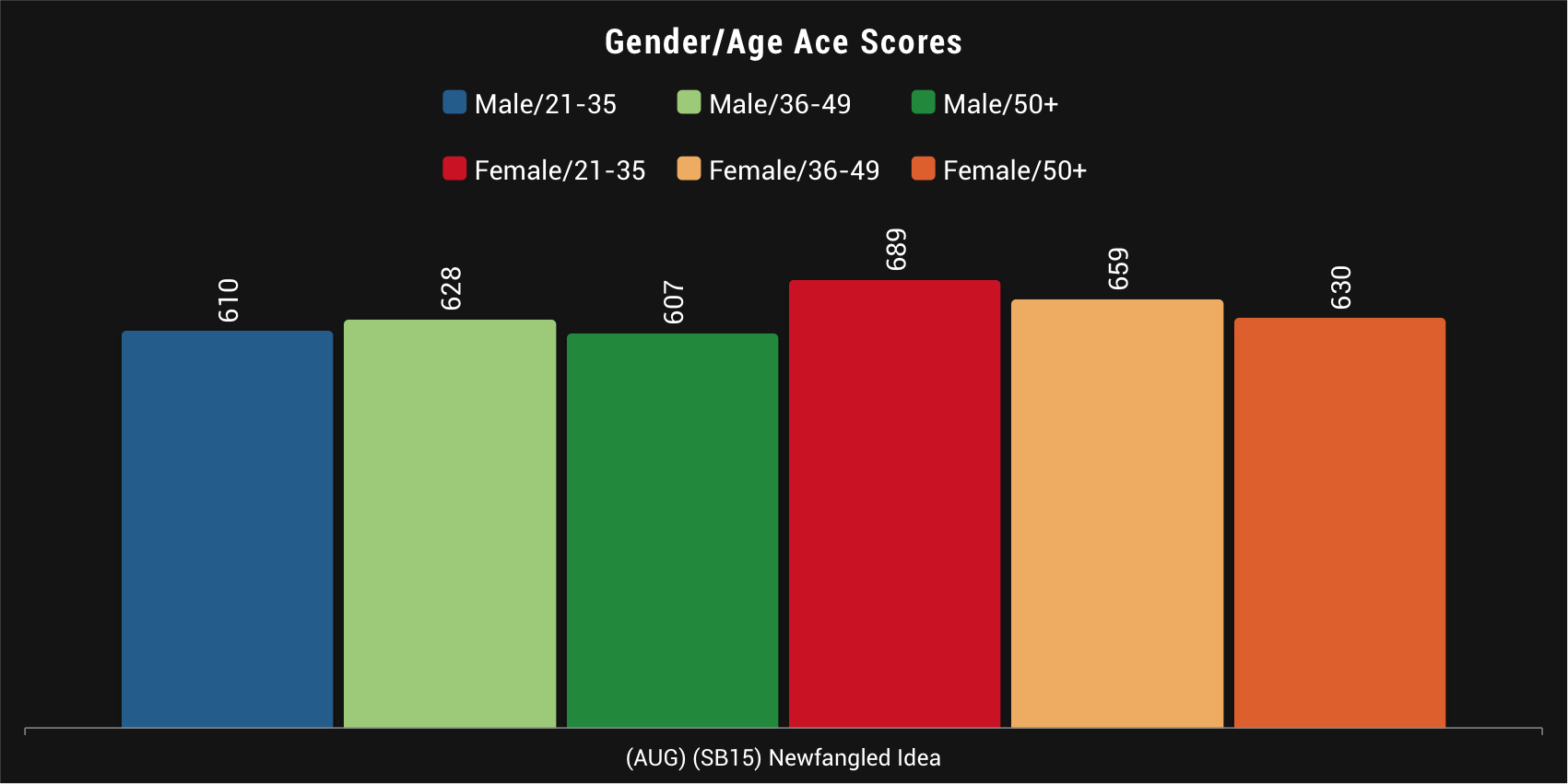 The younger demographic of women was also most likely to call the ad “funny.” Among the 297 optional responses gathered for the ad, 14% of consumers, overall, mentioned how “funny” the ad was. 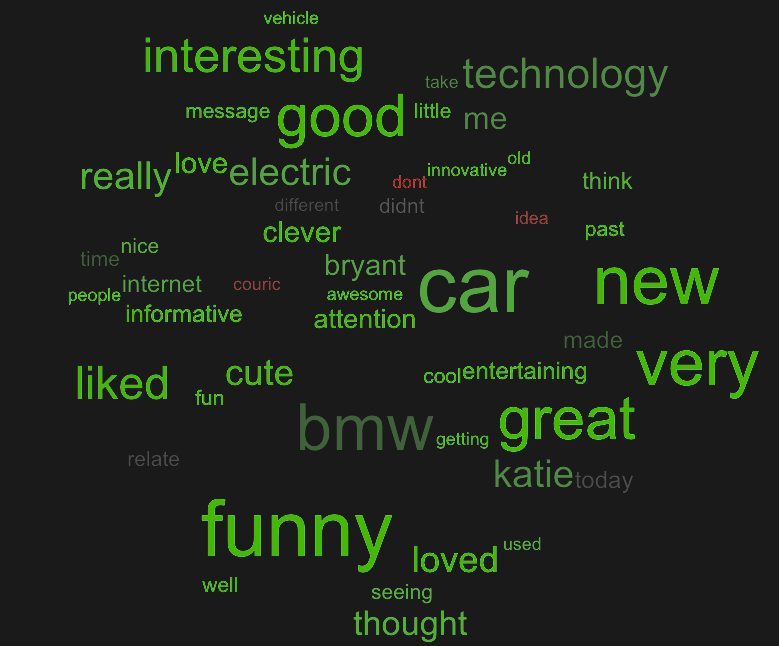 While the ad’s product was the focal point in the second half of the ad, Couric and Gumbel still stole the show. Thirty-two percent of those surveyed said that the talk show hosts were the best part of the ad while only 15% indicated it was the BMW i3. Either way, the ad certainly made an impact–both digitally on YouTube and during the Big Game, with it being the 15th highest rated Super Bowl ad among the general population.

Snickers debuted its latest ad in its long-running campaign, “You’re not you when you’re hungry,” during Super Bowl XLIX. The ad was pre-released on YouTube just three days before the end of January, yet was able to earn enough views to make it to #6 on the YouTube Ads Leaderboard list for the month. In the hilarious spot, by the magic of television, Snickers inserted Danny Trejo and Steve Buscemi into a classic Brady Bunch clip.

“The Brady Bunch” was the highest-scoring humorous ad among all Super Bowl spots from this year, earning an Ace Score of 652. While the delicious candy bar brought the ad high Desire scores, the featured mix of celebrities was voted the best thing about the ad by 41% of consumers. 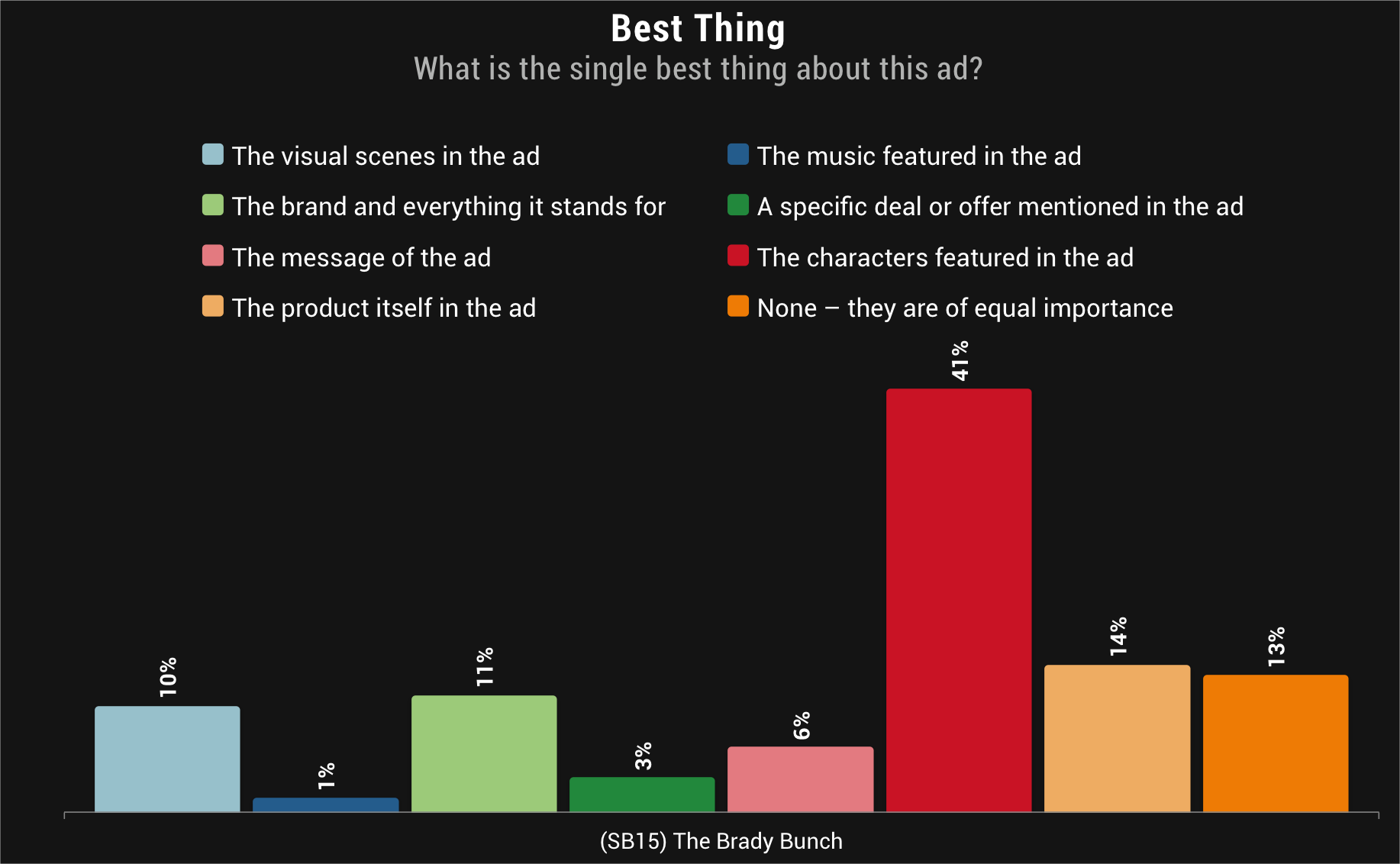 Consumers loved seeing Trejo and Buscemi inserted into a scene with Mike and Carol Brady. Twenty-eight percent of consumers mentioned how “funny” the ad was while 4% even went as far as to call it “hilarious.” 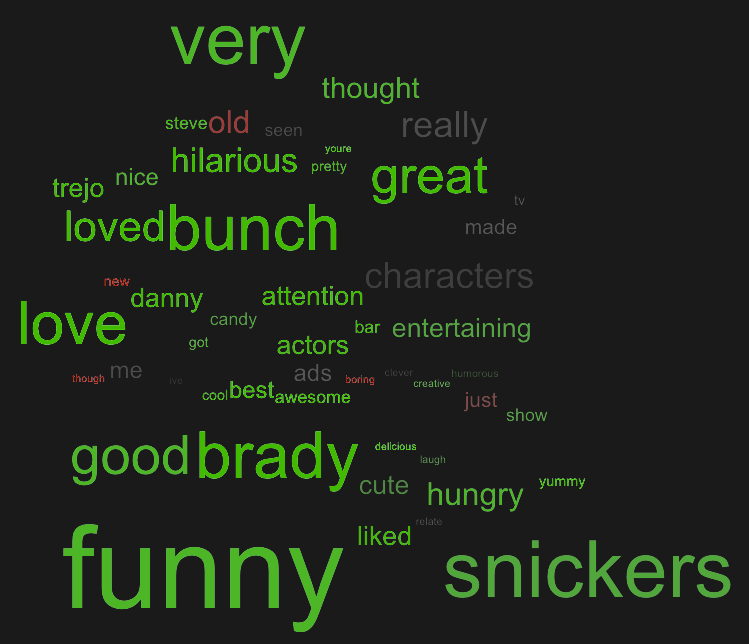 While using celebrities in ads can be tricky, Snickers completely nailed this execution and casting, creating a new twist on its well-known campaign.

BuzzFeed created a new ad as part of its “Dear Kitten” campaign for Friskies. The 3-minute+ version of the ad features the wise cat informing the little kitten all about the humans’ traditions during the Super Bowl. While we didn’t have consumers watch and score the full-length version, we did have them take a look at the minute-long spot that aired on TV. Consumers awarded the shorter version an Ace Score of 593, which is nearly 7% above the 90-day Pet Care norm.

While the ad scored quite high on an overall basis (afterall, a majority of Americans do own a pet), the ad scored particularly well with cat owners, who awarded the spot a score of 702. Even dog owners got a kick out of watching the cat finagle his way around a Super Bowl part, giving the ad a score of 614. 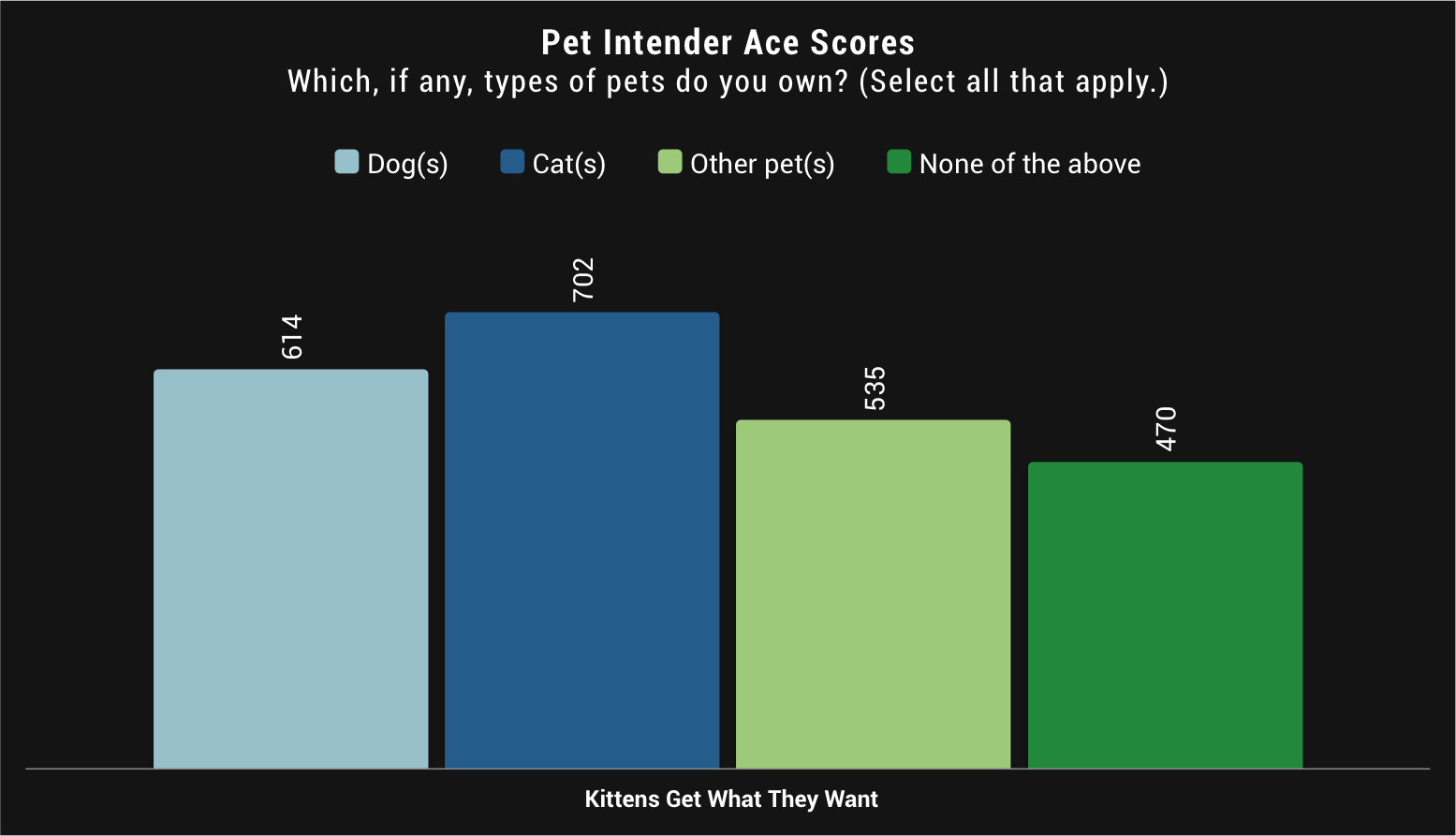 Like many successful, viral ads, “Dear Kitten” scored especially well in terms of Attention and Likeability, meaning the ad has the ability to breakthrough and grab consumer attention. The Attention score is 13% above the Pet Care 90-day norm while the Likeability score is 12% above norm.

The ad’s component scores confirm that this ad not only performed well from a digital, viral standpoint but also makes it a good candidate for a broader, TV audience as well. “Dear Kitten” resonated similarly across age and gender demographics, with, of course, animal owners loving the ad the most.

Now rounding out the bottom of YouTube’s Ads Leaderboard, Budweiser’s viral spot “Clydesdale Beer Run” is a subtly funny ad that debuted just a week before the day of the Big Game. While the ad never aired on TV, it still garnered many views online. The 30-second ad earned an Ace Score of 530, coming in 25 points above the 90-day Beer norm.

Like many of Budweiser’s other well-known ads, the Clydesdale, by popular opinion, was the best thing about the viral video ad. Thirty-three percent of consumers said that the characters featured were the best part of the ad. 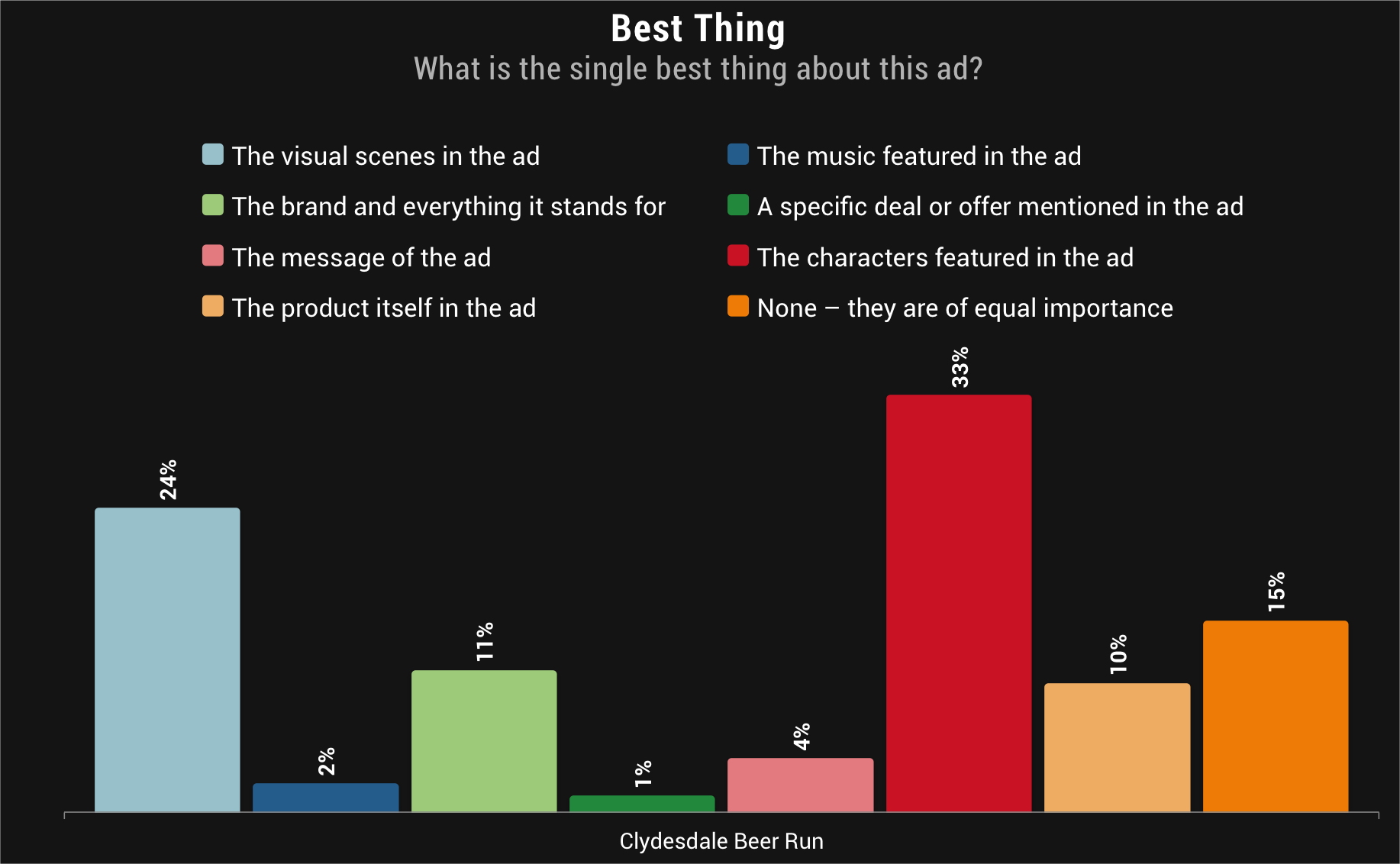 While this ad did not run on TV, our data suggests that it may have performed quite well as a Super Bowl teaser during general population TV viewing. The ad performed especially well among beer drinkers, with those who drink imported light beer awarding the ad a score above 700.