From unique characters like The Muppets to a standalone celebrity like Cardi B, this holiday season brands are incorporating famous faces in their ads. Featuring these well known characters (and voices), allowed advertisers to tap into viewers’ minds and draw in their attention (as the above norm Attention scores show for a majority of the ads in this set).

We analyzed some of this year’s holiday promotions leveraging well-known celebrities and characters. Check out the key insights we uncovered:

With a winter wonderland parody of “My Favorite Things” starring Anna Kendrick as the lead singer, dancer, and product aficionado, it’s no surprise that this ad made it among the holiday’s top ads with music scored as the Single Best Thing. As a matter of fact, this 30-second Frito-Lay spot also scored highest amongst our celebrity holiday ads on our Audio emotional metric. Due to the use of a timeless song and attention grabbing visuals, “Favorite Snacks” scored high on our Nostalgic, Arresting, and Love It emotional metrics.

Having played a central role in Pepsi’s Super Bowl 53 spot, Cardi B is back at it again – this time she’s helping people give the one gift that’s on everyone’s list: cash. Although “A Cardi Carol” is a bit lengthier than the rest of the ads that made our list (coming in at 2:12), this ad’s strong branding resulted in 90% of viewers recognizing “Pepsi” after viewing.

A polarizing choice among the gen pop audience, Cardi B successfully resonated above one year soda norms with Gen Z females (likely the intended audience). In the word cloud (which reflects viewers’ voices) below for females ages 16-20, Cardi’s presence was regarded in a mostly positive manner.

When it comes to utilizing famous characters, Facebook absolutely nails it in one of its latest holiday Portal ads. As part of their ongoing feature of the Muppets, “Sweet Gift” stars Kermit and Gonzo thanking each other through their Portal devices for the gifts they gave each other with very funny dialogue.

This spot scored the highest for its characters amongst all holiday ads this season – with 53% of viewers selecting Kermit and Gonzo as the Single Best Thing. Additionally, “Sweet Gift” showed positive response on nearly all Component Scores – with factors such as Persuasion, Attention, Likeability, Watchability and Change scoring above the norm.

The impact this Portal spot had on viewers from simply the characters alone can be seen by how high this ad scored on our Nostalgic emotional metric (ranked as the sixth most Nostalgic ad of the holiday season) – indicating that although the product was modern, the characters featured made viewers feel otherwise: 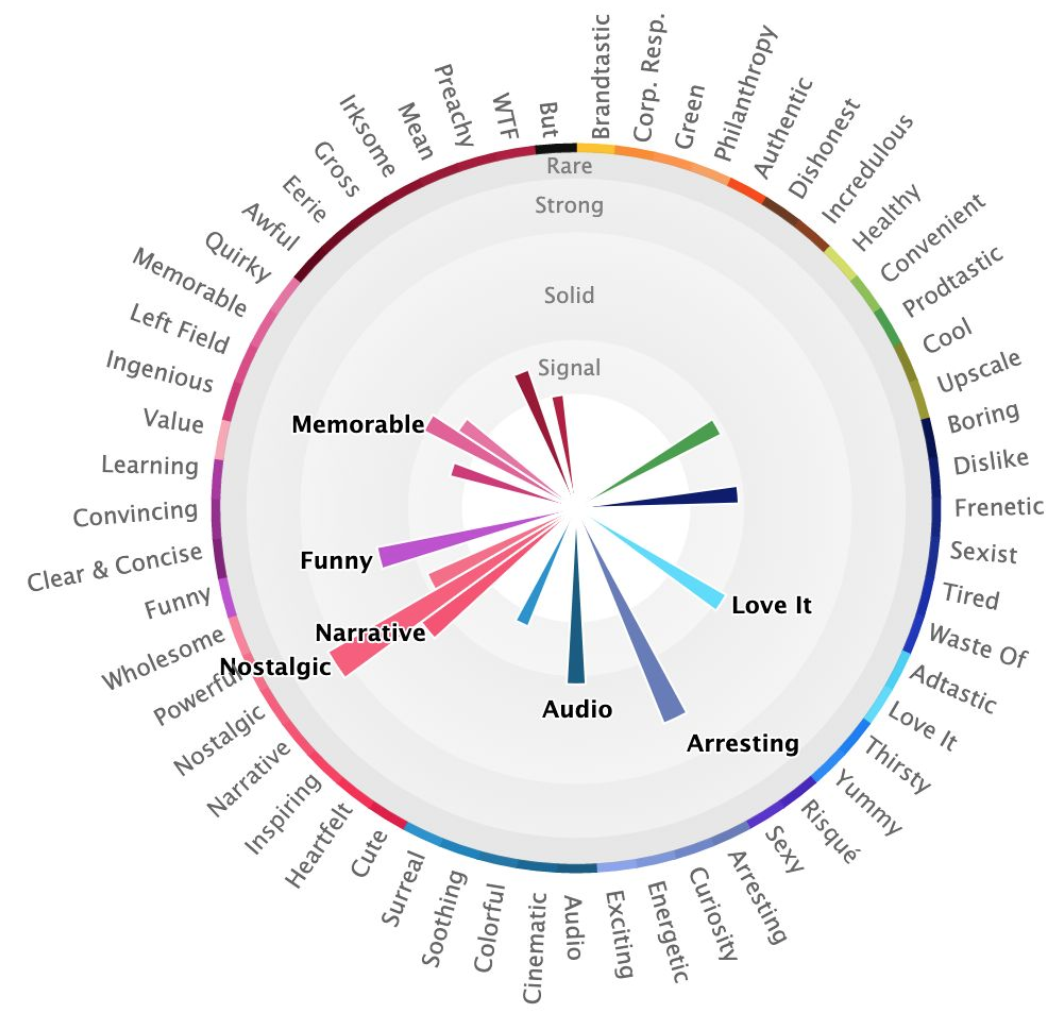 Below, viewer verbatim comments reflect just how vital a role the Muppet characters played in the ad:

“I LOVED this ad!! the muppets are super cute and the script is hilarious!! Makes me want a facebook portal” Female 21-35

“Kermit and gonzo are timeless characters that immediately bring joy and a sense of wholesomeness to anything they might pitch, their presence along sets my mind at ease with how familiar they are, interesting to see such traditional; characters team up with a new technology” Male 36-49

“I like the commercial because it has muppets in it. I like the humor in the ad. I like the two characters. I like the message for portal. The muppets make me want to take a better look about the product.” Female – 36-49

In sync with their Super Bowl 53 creative and a much more covert celebrity approach, Bubly featured a rendition of Jingle Bells sung by one of the most recognizable Holiday season voices, Michael Bublé. With 22% of viewers choosing the music as the Single Best Thing, “Happy Holidays!” was ranked as the second ad this Holiday season for it’s music (no surprise, the #1 spot went to Spotify).

Between Bublé’s Super Bowl cameo and the presence of his voice in this ad, more than 50 of the over 400 respondents that successfully recognized the Bubly brand in “Happy Holidays!” spelled it as his last name (Bublé). Maybe they should make it Bublé after all!

Arguably one of the most recognizable faces from the list, this ad features Ellen Degeneres debuting her brand new pet line for Kohl’s. Across the gen pop audience, the strongest creative component was the Information delivered about the products. Additionally, Ellen’s star power made her the most mentioned celebrity (30%) in viewer’s voluntary responses among these holiday ads.

However, it’s important to remember that celebrities are brands themselves and can sometimes overshadow the advertiser. While not completely the case in this spot, Kohl’s brand recognition was lower compared to its other November/December ads, while Ellen Degenres’ brand received 30% of the unaided recognition.

Viewer verbatims display how this ad brought about excitement whilst simultaneously informing them of the brand and offer being portrayed:

“The ad is catchy because of how it’s presented (as a talk show/Oprah Show) and the characters! It builds into what the deal/offer is and I like how the crowd goes overly crazy. It’s relatable because we are going into the holiday season and everyone has to get shopping done of some kind for gifts.” Female 21-35

“The ad was funny, a bit of a spoof on talk show giveaways. But it’s also a good sale and encourages me to find the nearest Old Navy and go there for Christmas shopping.” Female 36-49

“Having a star like Harris was great. The humor in this ad is really what I liked about it.” Male-50+

Celebrities are a risky investment for brands at any time of the year because of their polarizing nature (they all have their fair share of fans and naysayers). However, the famous characters in this year’s crop of holiday ads worked in favor of most of the brands.

The Rise of Anti-Tech Messaging