We’re wrapping up our 2019 holiday coverage with the top 10 Breakthrough ads. After testing nearly 400 festive ads this season, the following achieved the strongest performance on our Attention and Likeability components, breaking through the hohohos and falalalas.

How did each of these advertisers pulled off an entertaining spot that captured the holiday spirit? Find out below.

In this 60-second spot, Well Fargo moved viewers with its informational and empathetic message about the less fortunate and its partnership with Feeding America. As such, viewers perceived the brand in a compassionate and giving light with scores on our respective emotional metrics, Corporate Responsibility and Philanthropy. Additionally, the information combined with the storytelling tugged at heartstrings with scores on our Powerful, Heartfelt and Inspiring.

Beyond Breakthrough, this ad knocked it out of the park across all component measures and achieved an overall Ace Score of 730, which ranks in the top 25 of the over 7000 ads tested this year- wow!

The first of two Subaru ads among the Top Breakthrough Holiday ads, “Little Santa” shares the story of a young boy’s Make-A-Wish to be Santa for the day. Similar to Wells Fargo’s ad above, Subaru’s Narrative approach to charitable messaging generated an overwhelmingly Powerful, Heartfelt and Inspiring reaction from viewers (as shown in the emotional profile below). 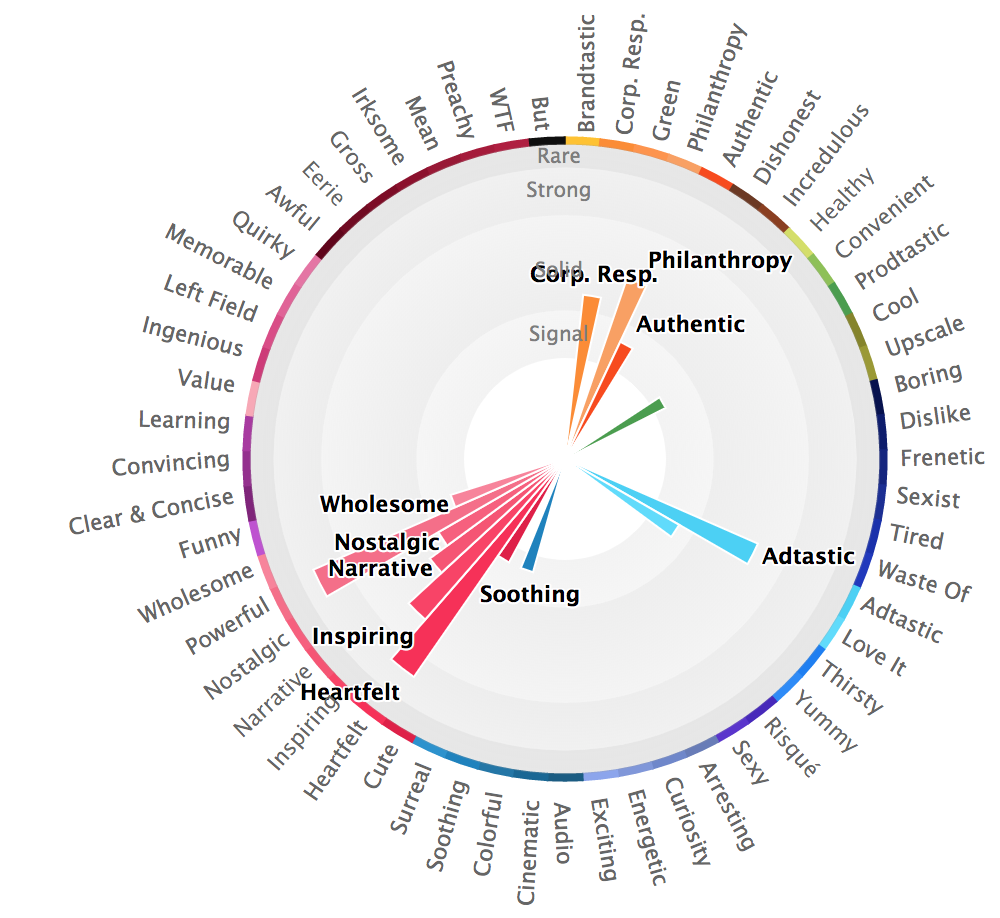 Viewers connected with the Likeable creative storytelling in Microsoft’s holiday spot so much so that the top emotions evoked related to the Ingenious nature of the Narrative. Additionally, the plot’s progression evoked some Curiosity as to what would unfold and contributed to the strong Attention score.

FedEx entertained viewers in this Memorable spot that turned an ordinary shipping box into a spaceship. The portrayal of a young girl’s Ingenious imagination was not only captivating, but a majority of viewers named the Visual Scenes the Single Best Thing about the ad.

“The New Kid” tells the story of life after closing at Dick’s Sporting Goods. It’s another Ingenious spot in the eyes of viewers, but beyond that it registered signal across a wide array of emotions including our Arresting and Love It metrics, which is further indication of its Breakthrough capabilities. The CGI product visuals stood out as the Single Best Thing and contributed to an increase in purchase intent among 57% of respondents.

A humorous take on an elf’s first day on the job, Oreo successfully drove Desire by integrating itself into Santa’s cookie-and-milk tradition. Overall this spot received Love It praises from viewers, 60% of whom reported increased purchase intent.

When it comes to the Single Best Thing, the philanthropic Message came through strongest in Subaru’s “Little Santa” while the adorable animal Visual Scenes in this spot were equally appreciated. Subaru told two different stories in its Breakthrough holiday spots, but viewers  formed almost identical emotional connections with each.

Learn more about Subaru’s “Night Visit” and other heartfelt ads from the season here.

Frito-Lay packed a product punch with at least five of its snacks featured in “Fireplace.” On top of that, Anna Kendrick’s cameo, festive visuals and a witty rendition of “My Favorite Things” meant there was something Attention-grabbing and Likeable for every viewer. All of these creative elements worked together to drive product Relevance and Desire on top of Breakthrough as shown in the ad personality below. 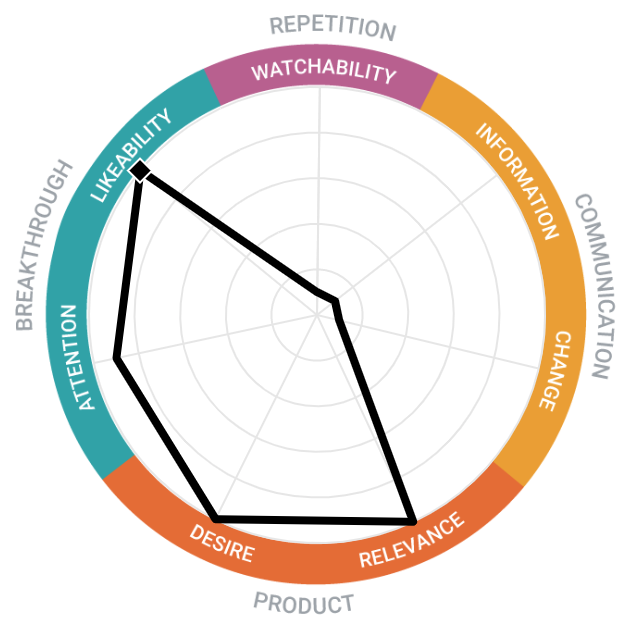 We analyzed another ad from this Frito-Lay’s campaign here.

In this short but sweet ad, Milk Bone generated some genuine laugh-out-loud reactions from viewers. Aside from strong Breakthrough, the spot was highly Relevant, particularly among cat owners who could relate to the Christmas-tree-feline-struggle and dog owners who were clearly the target audience.

The Nostalgic and Relevant song choice hooked viewers in while the ad in its entirety was enjoyable for all. Get a closer look at how Campbell’s tapped into consumer insights to make a simple ad with high emotional impact that’s educational no matter what the season, here.

Between the upbeat song, the message about togetherness and the delivery driver’s story, “Happy Holidays” had a lot going for it. However, it was the Amazon brand that stood out to most viewers as the Single Best Thing.

Throughout the spot, the brown packages reinforced Amazon’s ability to deliver whatever one needs this holiday season. This strong branding combined with the ads Breakthrough capabilities drove Relevance and Desire as well. As such,  2 in 3 viewers reported positive visit intent for amazon.com.

Congrats to the top breakthrough holiday ads! Keep your eyes peeled in the new year for our roundup of 2019’s top ads. Until then, have a happy holiday season!

Note: Bold words are from Ace EMO, which measures the strength of emotional connection in advertising. The proprietary approach quantifies 57 emotions and reactions such as: Heartfelt, Nostalgia, Humor, Authentic, Dishonest, Preachy, and Sexist. Scores are passively derived from voluntary respondent verbatim comments using Natural Language Processing and machine learning analysis. Each of the 57 emotions are evaluated relative to all other ads in the Ace Metrix database, totaling over ten million verbatims.