Were You Looking for a Laugh During the Big Game?

Who doesn’t expect to see hilarious Super Bowl ads? But the twittersphere, media outlets and my own Facebook friends have expressed some disappointment over the lackluster, “boring” commercials of the 48th Big Game – a sentiment that might be further inflated by the disappointment over the competition on the field. Luckily we have the data to determine just how funny America found these ads and further to reveal if the funny ads were effective.

The Super Bowl could just as easily be called the funny bowl – approximately 67% of ads each year attempt humor. While this year was no different (64% of ads attempted humor) fewer got the big laughs as in years past. In fact, statistically, the game was 19% less funny than last year, with the lowest average Funny Index of the past four years. There were some notable successes, including six of the top 10 ads, but on the whole, advertisers used a safer, smarter approach to humor this year, vying for the relatable chuckle rather than the polarizing risks of years past.

As we’ve reported in many instances, most recently in the paper “Is Funny Enough?”, and our follow up blog post “Things that make you go LOL”, funny does not equal effective. To be funny AND effective you need information – and that is exactly what Hyundai and Radio Shack delivered. Doritos, Heinz and M&Ms relied on their powerful brands to carry them through the humor minefield – and did so successfully.

Here are the top five most effective funny ads for this year’s Super Bowl:

Definition: The “Funny Index” takes the proportion of viewers who indicated that the ad was funny and divides it by the average “funny proportion” across all ads, and then multiplies that ratio by 100. Scores that are above 100 are funnier than average, while scores below 100 are less funny than average. As an example: a score of 200 is twice as funny as the typical advertisement.

Hyundai’s “Dad’s Sixth Sense” and Radio Shack’s “Good Bye ‘80s” do an excellent job of using humor to communicate a message. In the case of Hyundai, a key product innovation; and in the case of Radio Shack, a change in brand image. As you can see by the Funny Index, these top performers don’t elicit scores equating to “hilarious” but in all cases, the ads appeal broadly – a feat that many fail to do when pushing the envelope with humor. Doritos, Heinz and M&Ms lean a bit more on their brand recognition to take a light-hearted, family-friendly approach to humor than many others – having really no expectation or objective to deliver a stronger message than that of a product/brand reminder.

Now let’s take a look at the 10 ads with the highest Funny Index scores of the game. 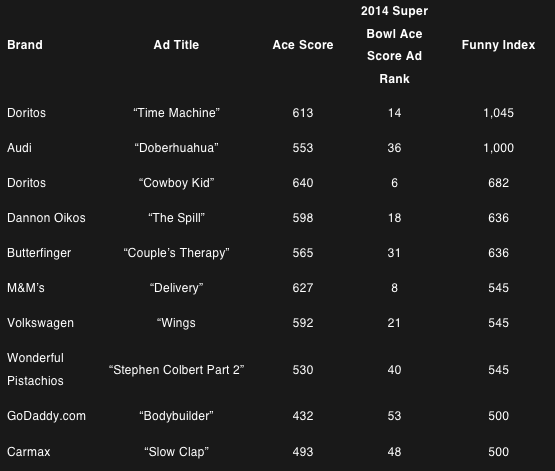 It’s no surprise to see both of the Doritos spots on the list of funniest ads. Doritos uses humor exclusively as their ad strategy, and it tends to pay off with top scores. Interestingly, this year is the first of five where Doritos has ranked outside the top five on the most effective list with both of their ads. In past years, one if not both achieved top five status, and they took the crown in both 2011 and 2012. But this year’s top performing ads earned their places with different approaches and gave Doritos and the others stiff competition. Many of the ads that ranked among the most effective included an element of humor but did so in with a balance of other elements such as a focus on inspiration, information and emotion such as Hyundai’s and Budweiser’s top ads.

Audi’s “Doberhuahua” was deemed the second funniest ad with its unique metaphor for compromise. But while audiences found the ad ten times funnier than the average ad, they had trouble recognizing the connection between the message and the product or the brand. While 26% of the general population surveyed used the word “funny” and another 7% called it “hilarious”, a significant portion of the verbatims expressed confusion for what and whom the ad was for – many appalled by the “weird”, “repulsive” and “sick humor”. The ad overall came in below the Super Bowl average of 575. Although it’s worth mentioning that among high-income auto intenders, the ad performed well above the average for both the Super Bowl and the lux-auto category with an Ace Score of 595. Attention and Likeability scores are Super Bowl worthy, however, the ad struggled with all other components, particularly with Information, likely the result of the brand and product being left out until the final seconds of the :60 ad.

We’ll cover more of the funny ads in our Post Game Huddle on February 6th. If you haven’t registered yet – sign up now. Space is limited but the data are not.

For more information on the Funny Index, download the paper or contact us to discuss a particular case of interest.