When you think of a “cool” ad you might picture a hip celebrity or a sleek product, and that very well might be the driving cool factor. What we found from analyzing 2019’s Top Ten Coolest Ads is that visuals are what push an ad into trendy territory.

Our Cool metric is one of fifty-seven from Ace EMO, which measures the strength of emotional connection in advertising. Scores are passively derived from voluntary respondent verbatim comments using Natural Language Processing and machine learning analysis. Cool picks up on any phrases close or related to ones like “very trendy,” “super edgy,” “cool!” “eye-catching”  and “stylish,” including synonyms, misspellings, and anomalies.

With over 8,400 video ads analyzed in 2019, and over 3 million viewer comments, these ads distinguished themselves by achieving the highest quantifiable level of Cool — Congrats!

The Visual Scenes were the cool-factor behind all of the ads above, which viewers crowned the Single Best Thing by a landslide for each. The graphics that stood out most were in Acura’s “Beat That,” Sherwin-Williams “Hide and Seek” and Honda’s “Breaking It In.” In Porche’s “Pop Star” a combination of the vehicle make (Product) and the Brand Itself also received strong mentions as the Single Best Thing.

Beyond that measure, viewers’ emotional responses to each ad echoed the impact of impressive visuals, with Cinematic and Colorful metrics present throughout the list (as shown in the heat map below). With the help of their eye-catching graphics, the Coolest ads in 2019 created Energetic and Exciting sensations for viewers:

The strongest Breakthrough ability (Attention-grabbing in a Likeable manner) came from Sherwin-Williams’ “Hide and Seek,” followed by GoPro’s long-form spot, “Introducing Hero8.” The immersive product illustrations in “Hide and Seek” sparked Desire at levels well above norm which translated to 57% of viewers reporting positive purchase intent for the paint brand.

Action-packed visuals made Acura’s “Beat That” the Coolest automotive ad (among both luxury & non-luxury categories) last year. In an industry where the general population doesn’t find their ads “Cool,” Acura stood out as the only auto ad to achieve Strong signal in 2019 (score at least 7.0 of 10). Overall, it was an Attention-grabbing spot for the Acura brand, with brand recognition at 90% after viewing.

Perrier’s “New Flavors” has cool written all over it. Each of the creative elements, from the upbeat song to the vivid colors, worked together to create a visceral viewing experience, which is evident in its emotional profile below. This fun ad was the highest scoring among bottled water brands in 2019, and drove positive purchase intent (61%) significantly above norm. 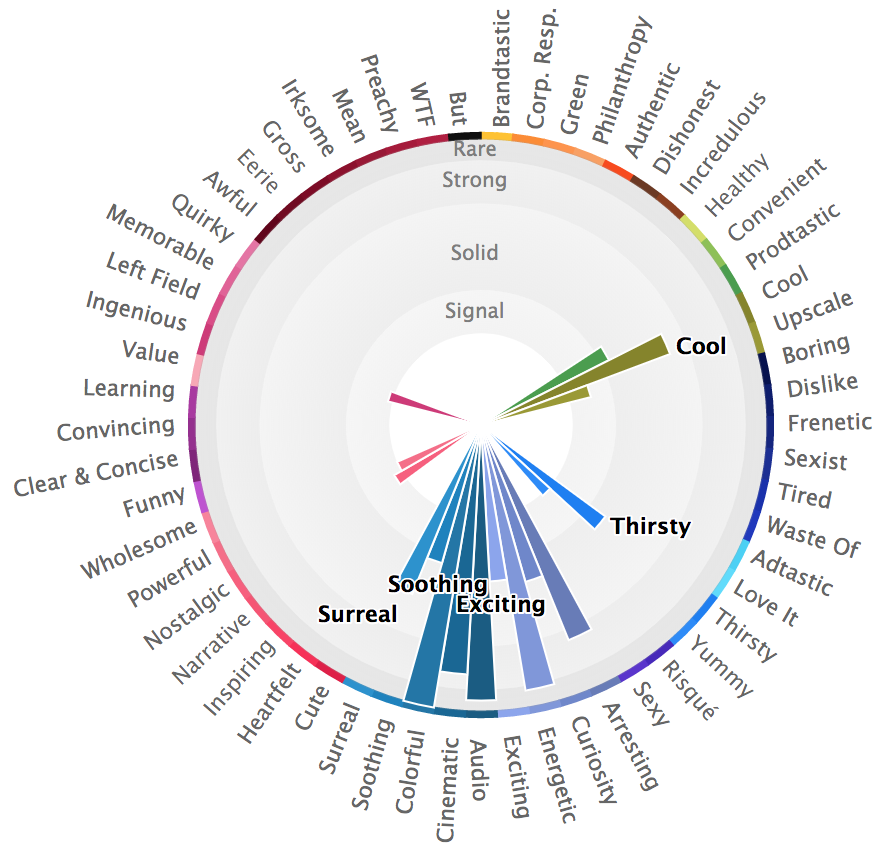 Porsche’s “Pop Star” beat luxury auto advertising norms over the past year and ultimately ranked among the top five luxury auto ads for Breakthrough in 2019. The brand’s well established status in pop culture practically cemented this ad among the Coolest and was instrumental in “Pop Star” driving consideration higher than previous Porsche ads at 52%.

In the eleventh hour of 2019, a second GoPro ad, “Your Action,” also ranked among the Coolest. While both GoPro spots significantly beat norms across all component measures, the detailed product information in the longer-form “Introducing Hero8” increased purchase intent among 2 in 3 viewers, which was 9% higher than that of “Your Action”:

Congratulations to the Coolest ads from 2019!