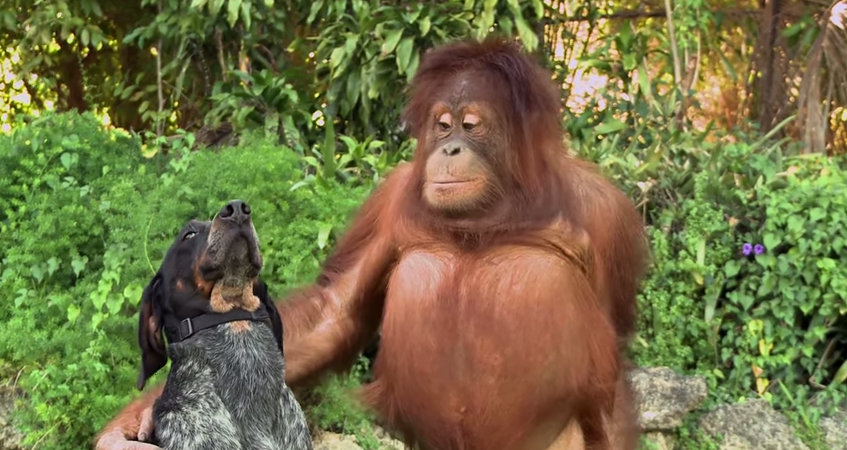 Each month the thinkwithGoogle site posts its YouTube Ads Leaderboard, which showcases the ads with the most views in each month. Each month we take a look at those lists to provide some insights as to how the ads perform against a representative general population audience. By definition the ads posted to these lists include paid views, organic views and audience retention (how much of a video people watched). Increasingly, the content is disproportionately short film items versus the branded ad content it used to be. Regardless, here’s a look at some of the most viewed video ads for February and how said ads would perform with a more diverse audience.

Ace Metrix scores are based on how everyone would respond to the ad, providing actionable data to marketers contemplating placing their online ads more broadly, digitally or in front of a television audience. To be both among the top viewed ads online and achieve a top quintile Ace Score or high Emotional Sentiment index is the remarkable confluence of great viral appeal and broad demographic appeal. Here are ten of the most popular YouTube Ads for February 2015.

Clash of Clans decided to team up with Liam Neeson for its Super Bowl ad. The ad scored relatively well, receiving an Ace Score of 607 (20% above the Video Games 90-day norm). The ad scored exceptionally well in terms of Attention (732) and Likeability (727). These breakthrough components are reflective of the astounding 47 million hits the video received in February on YouTube.

Consumers also had a lot to say in the optional response portion of the survey, using the word “funny” and “Liam” in 19% of responses. Other popular responses included “Neeson” (11%), “game” (17%) and “clash” or “clans” with 6% each. About 7% of consumers felt so motivated about the ad that they used the word “very” to describe it. 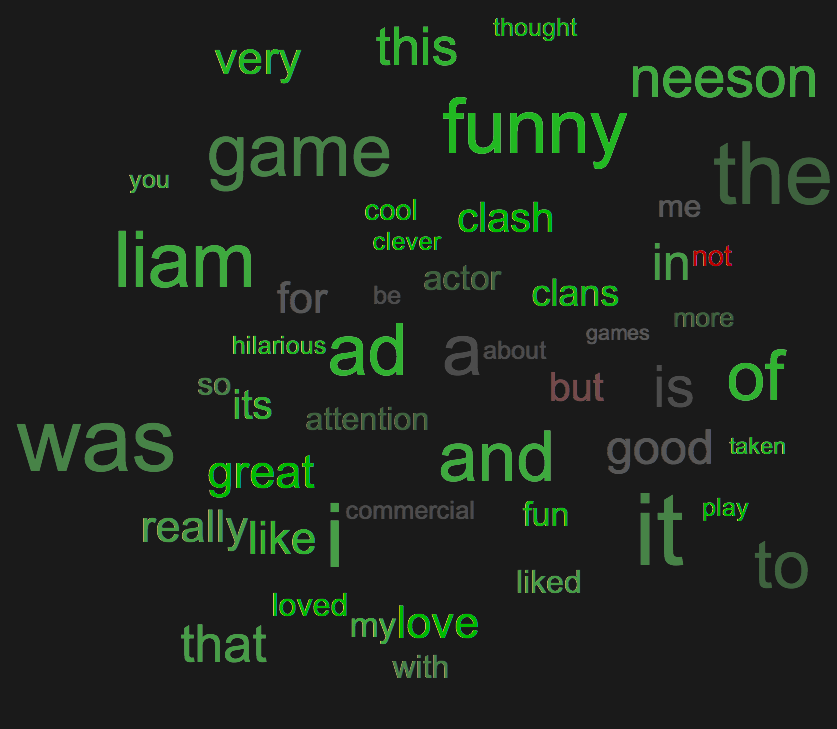 Adidas managed to get 31 million views in February for “Take It,” however, from looking at the data from the 30-second version of the ad, it’s obvious that the spot is narrowly targeted. The clipped version received an Ace Score of 514, slightly above the 90-day Footwear norm of 502. The ad scored relatively well on Attention (626), Likeability (613) and Relevance (544). However, consumers felt the ad was lacking in terms of providing any Information or course of Change. 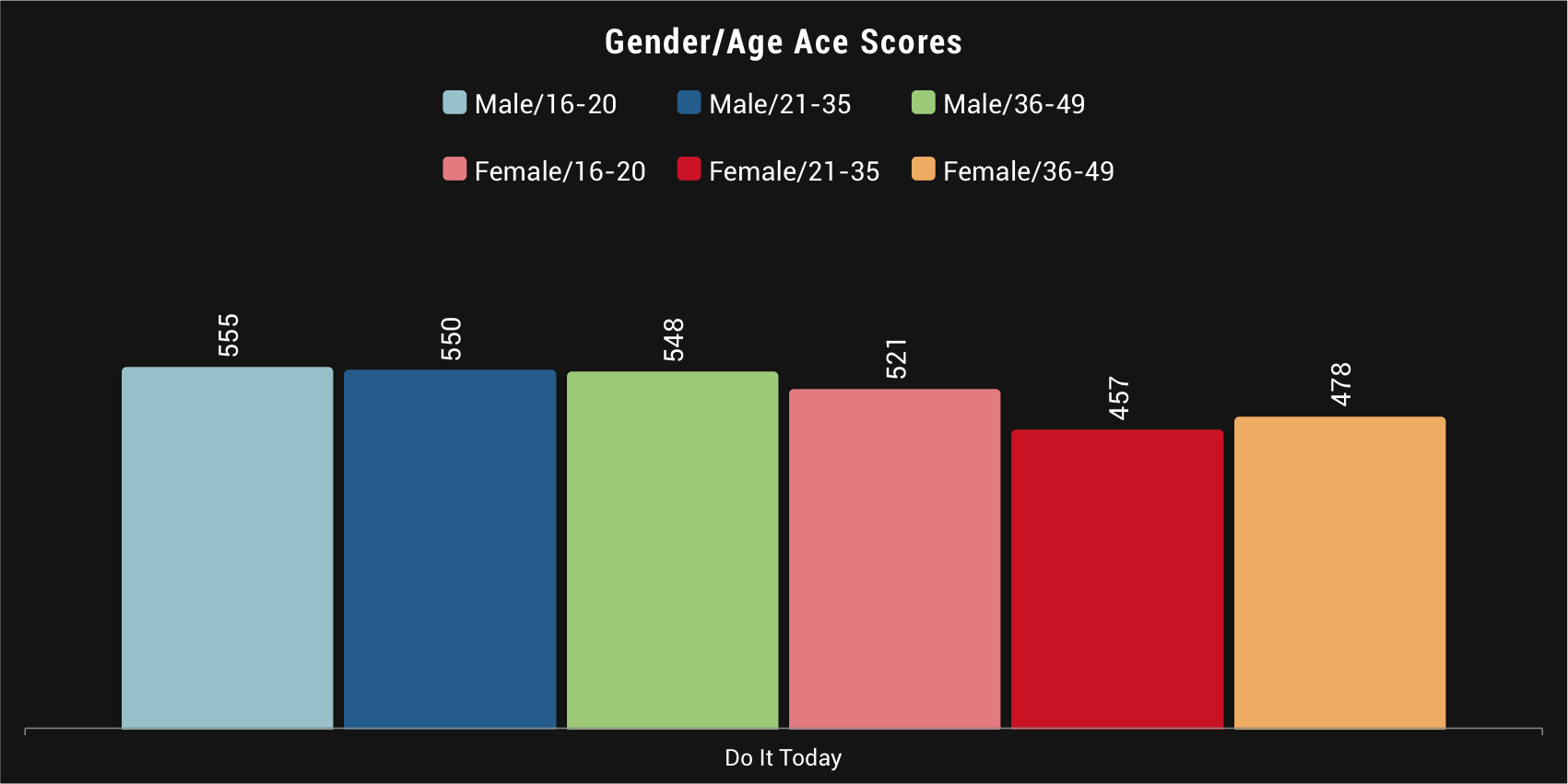 Overall, the ad was well positioned for YouTube given its relatively narrow audience. Reading through the 304 optional comments left for the ad, the ad is best suited for men who love sports and the Adidas brand.

Nissan used a different type of ad for its big game spot this past February, focusing more on the message, rather than its cars. While the ad still features many Nissans, the cars were race versions not available to the general consumer. When scored with the general population, the ad received an especially high score in terms of Attention, 11% above norm.

While consumers may have not gotten quite as much information as they would have liked, it is clear they appreciated the message of the ad with 20 percent of consumers noting it as the single best thing about the ad. This was followed closely by the music featured in the ad (19%). 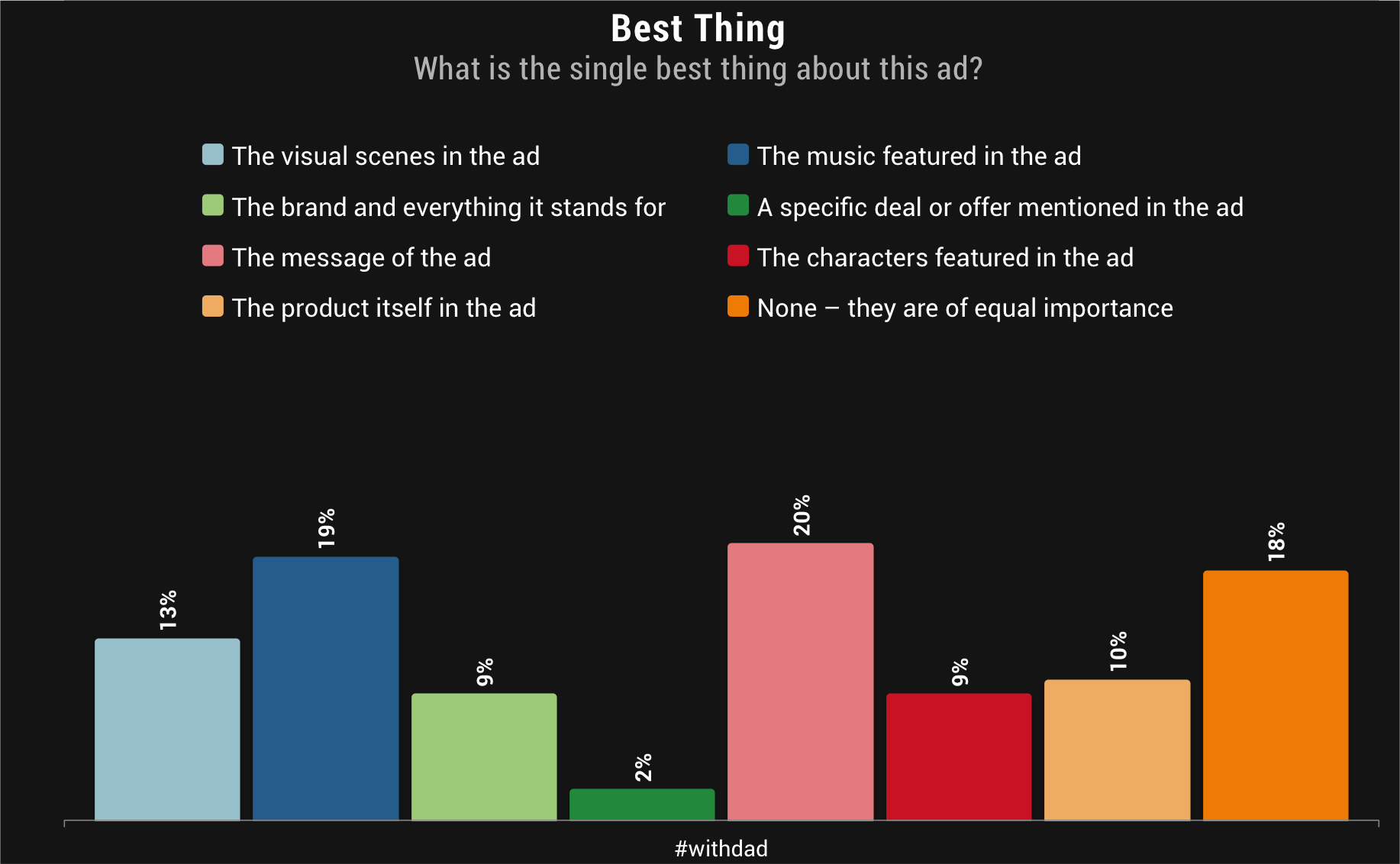 Rather than just telling consumers that Fiat is launching a bigger, more powerful SUV, the Italian car brand would rather entertain Super Bowl viewers with a unique commercial called “The Blue Pill.” Men consistently rated this ad higher, especially men in the 21-35 age group, who gave the ad a score of 641. While women ages 21-35 and 50+ gave the ad lower Ace Scores, women ages 36-49, scored the ad an Ace Score of 641, which is 8% higher than the average female score. 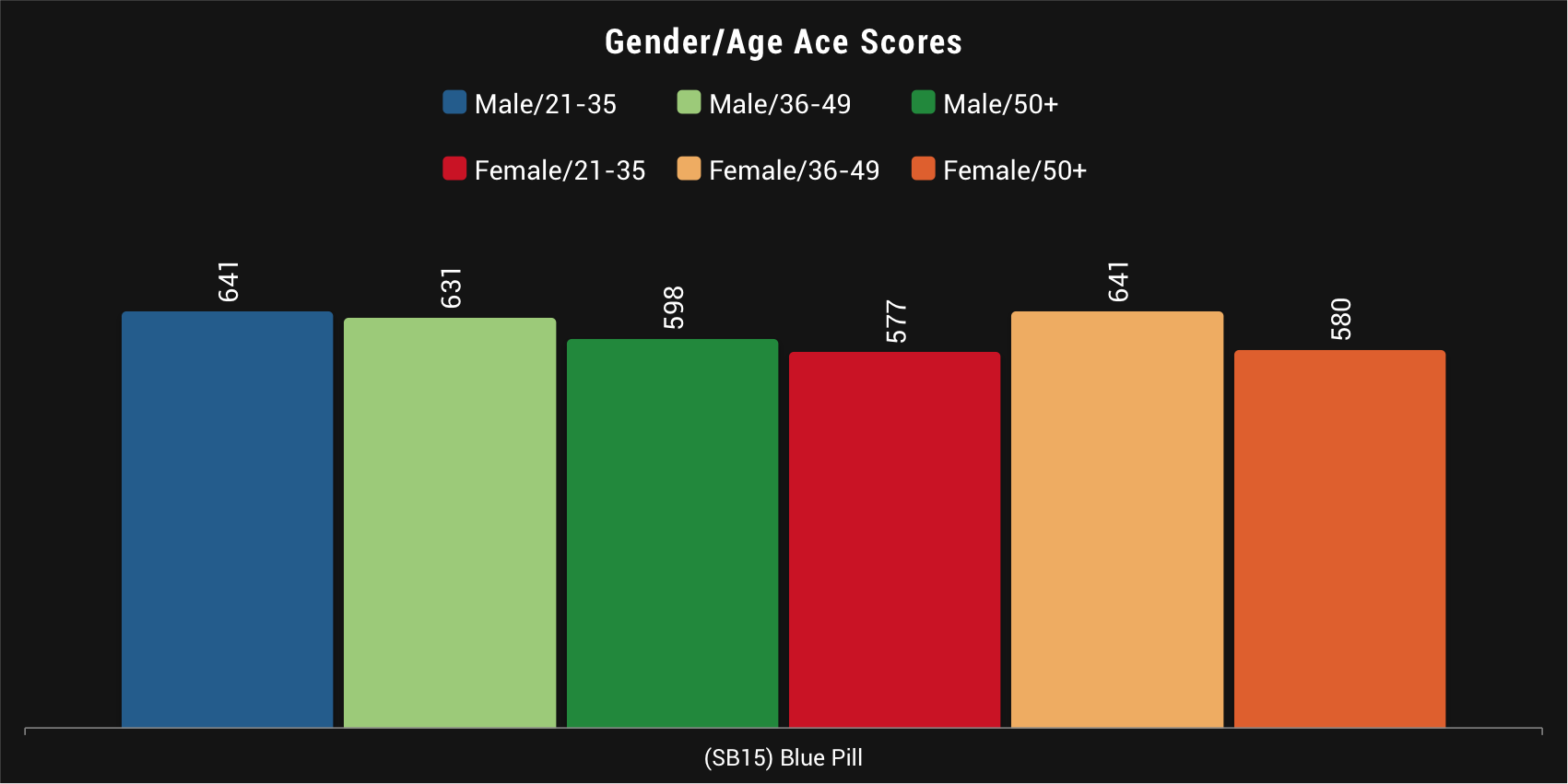 A total of 351 consumers felt compelled to leave feedback for the advertiser. Among those comments, the word “Fiat” was used in 10% of responses while 24% mentioned the ad was “funny.” 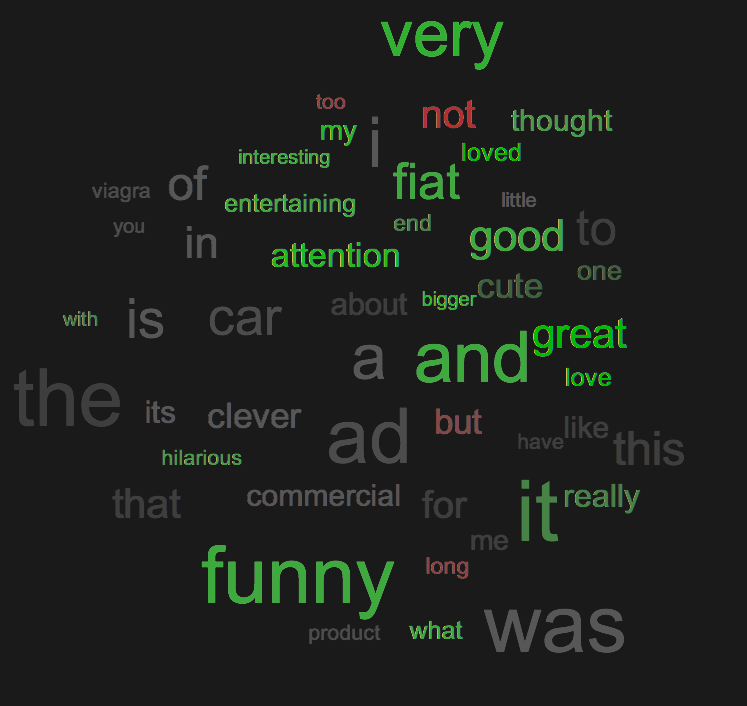 Android combines cute animals playing together with their campaign of “Togetherness” to create an instant success. “Friends Furever” received an Ace Score of 647, exceeding the Software norm of 504. Attention and Likeability were also off the charts with scores of 780 and 777, 33% and 34% above norm, respectively. While some thought that the ad lacked information about Android’s product, many forgave this due to the different animals playing together in unexpected pairs. 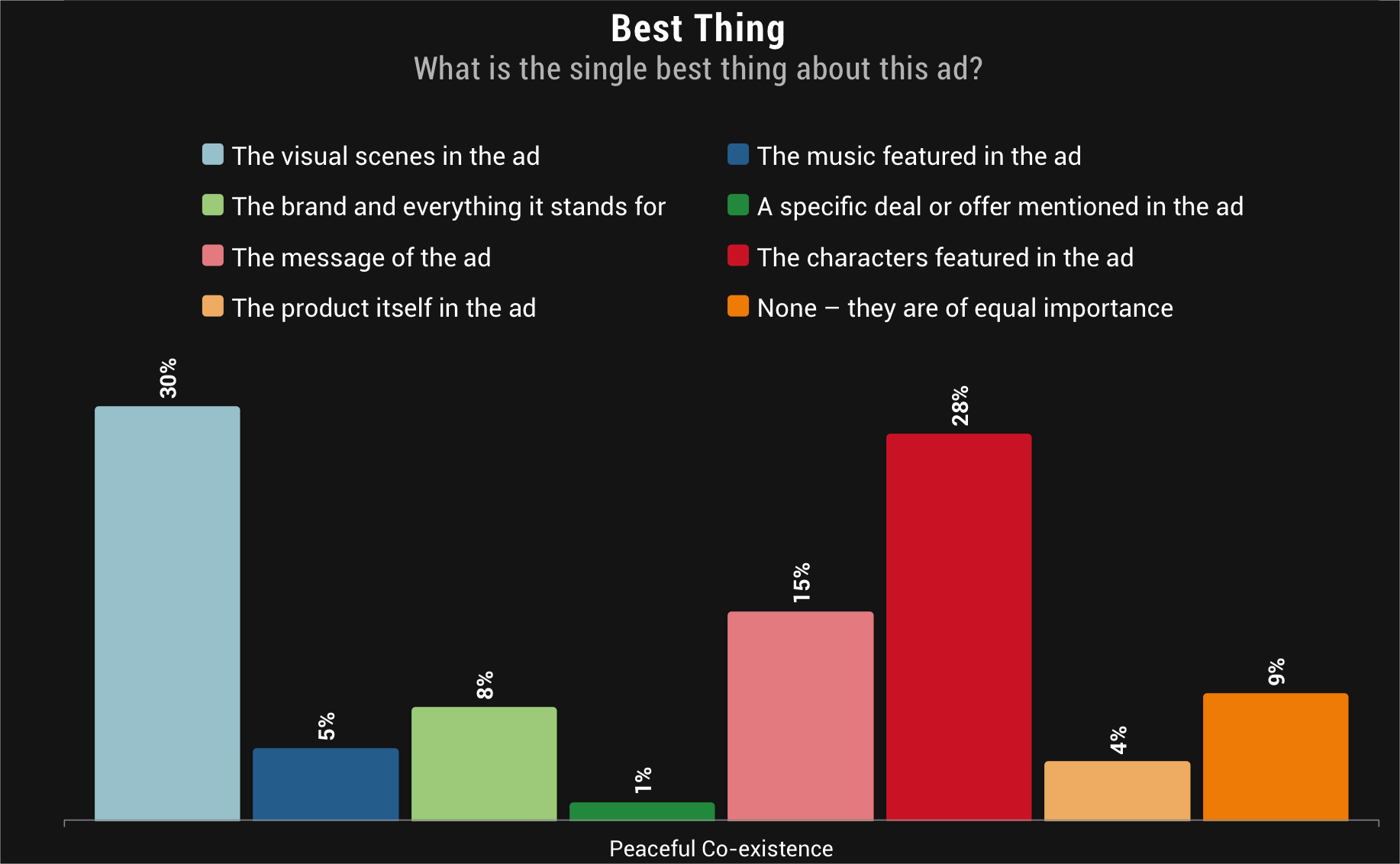 Android may not have given consumers a glimpse of any emerging technologies, however they did give consumers a cute ad with funny, furry friends playing together while relating to its campaign of “Togetherness.”

Jeep introduces the new Renegade model through a peaceful ad showing different parts of America and the world. The ad scored significantly better than the Non-Luxury Auto norm with an Ace Score of 625. However, the ad really shines in terms of emotional sentiment (ESI). The ESI average for Non-Luxury Autos is a 56, with Jeep usually scoring around a 62. “Beautiful Lands” scored an impressive 76, 23% higher than the brand’s average.

Almost half of consumers voted that the single best thing about the ad were the visual scenes (41%), followed by the music featured in the ad (18%). While only 6% of consumers voted that the product was the best thing about the ad, Jeep managed to capture the viewer’s attention through the visual scenes, music, and message of the ad. 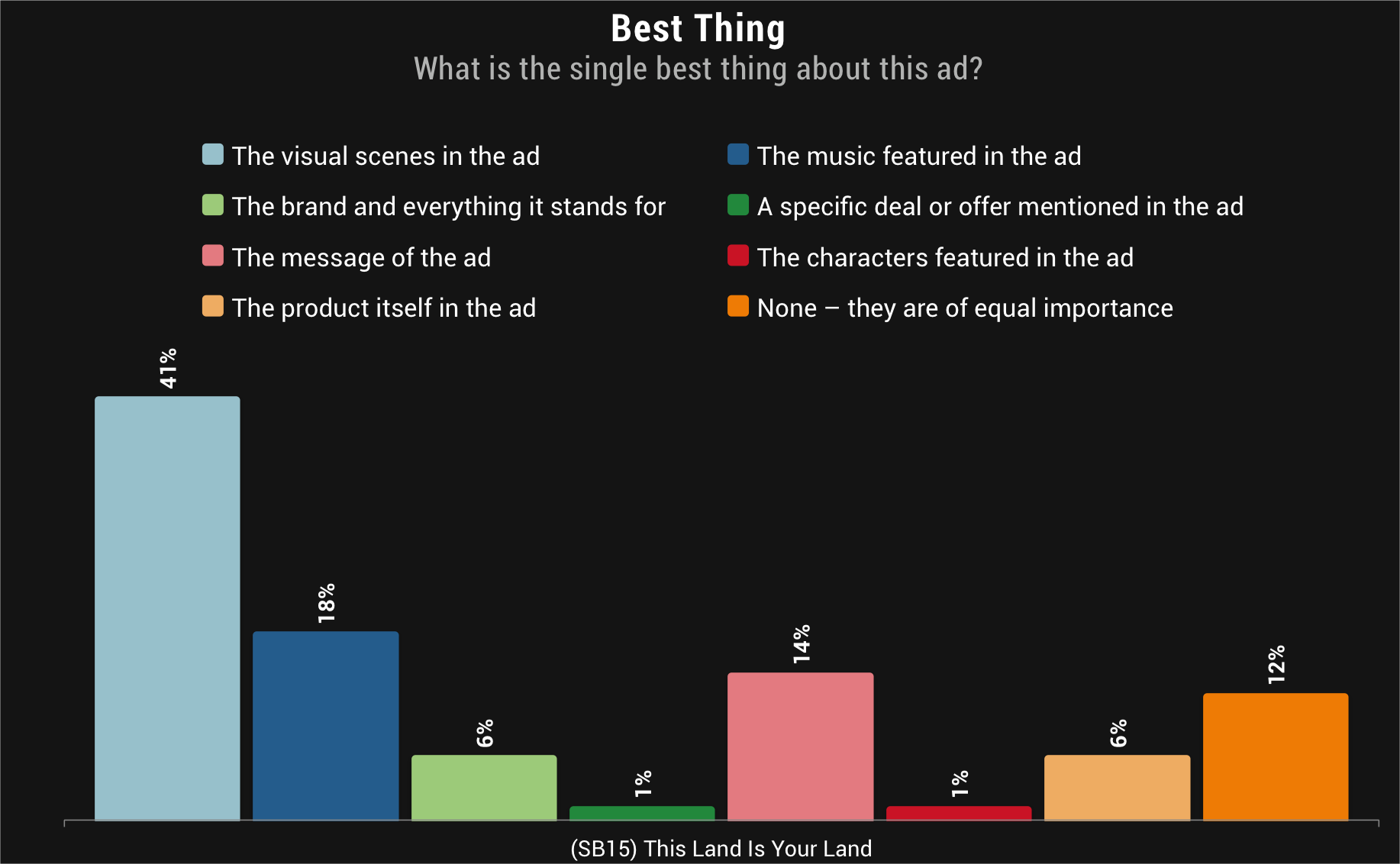 “Brewed the Hard Way” was a hit as soon as it was released, scoring well above its category norm in the Ace Metrix database as well as receiving millions of views on YouTube. While it may have not been Budweiser’s top scoring ad for the Super Bowl (adorable puppies are undeniably America’s favorite), consumers still awarded the ad an Ace Score of 622, 24% above the 90-day Beer norm. 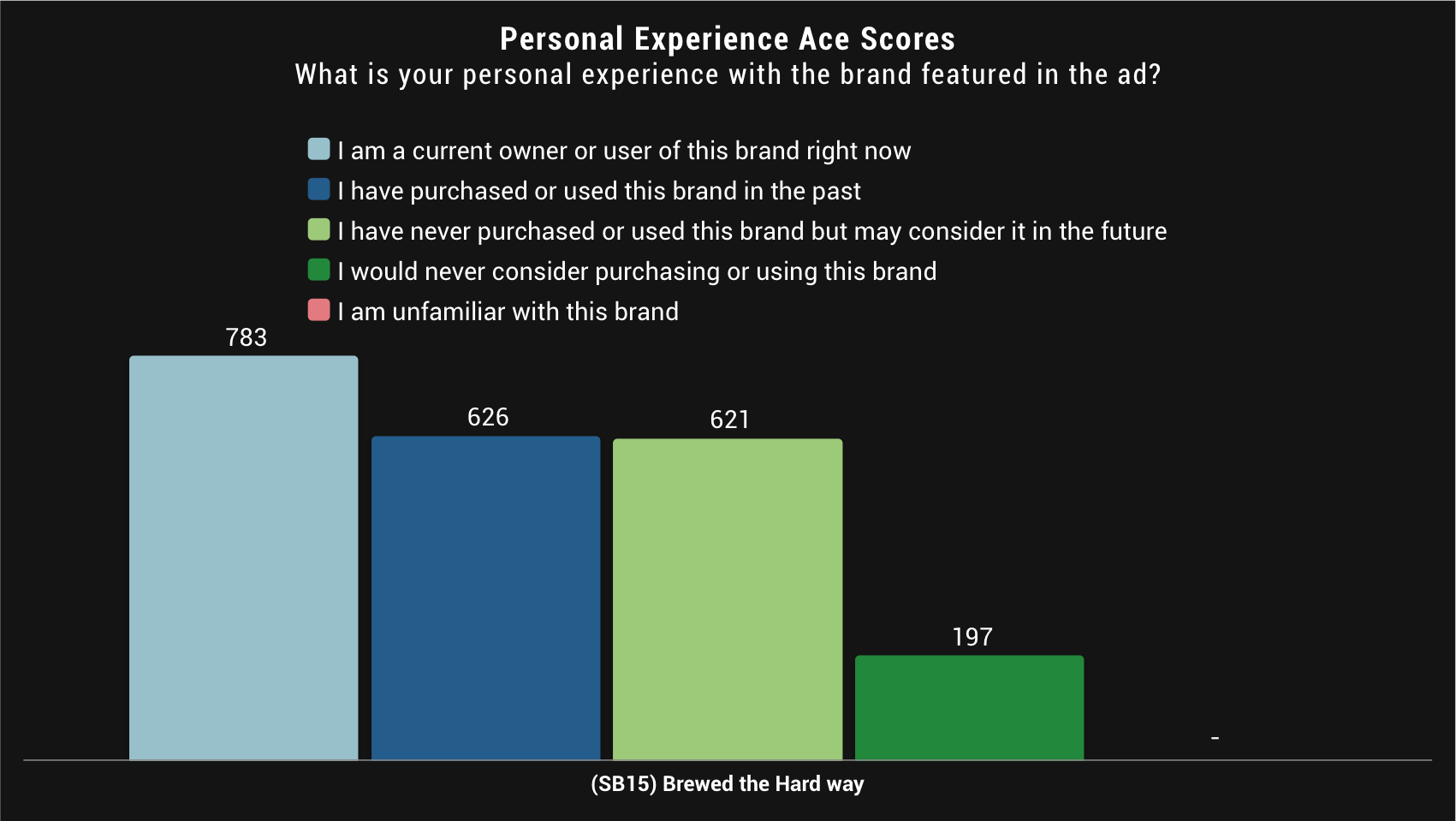 Overall, even though it was not Budweiser’s most watched Super Bowl ad (hello puppies, again), “Brewed the Hard Way” still managed to score significantly higher than the norm of the Beer category—quite the feat for an ad that is heavily product focused with no puppies in sight.

For Microsoft’s big game ad, the tech brand decided to create a unique yet heartwarming ad featuring a child named Braylon O’Neill and how Microsoft technology was used in the creation of his prosthetic leg. The ad scored very high in terms of Attention and Likeability, both great breakthrough components, proving that the ad is able to grab and hold consumer attention.

Consumers appreciated the heartwarming story of Braylon and 365 of them felt so moved that they left optional feedback for the advertiser. Words like “Microsoft” (16% of consumers), “technology” (7%) and “very” (13%) were commonly used. Other words like “touching” (5%), “moving” (5%) and inspiring (6%) were also used. Microsoft showed how its technology can help people like Braylon, and consumers appreciated the intermingling of technology and a moving story. 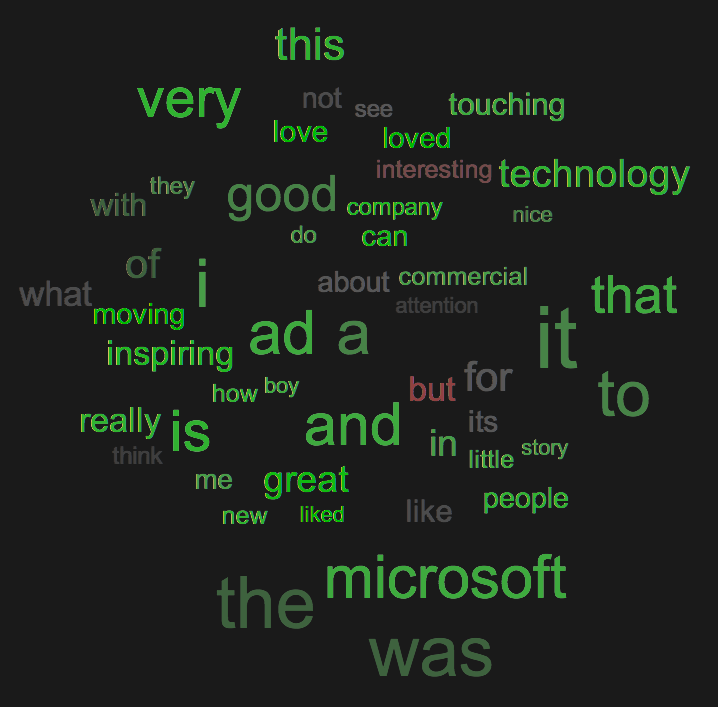 Sometimes, creating a classic ad with animals is much harder said than done. GoPro is known for promoting its users’ videos to viral status. In one of its latest ads that only appeared on YouTube, burrowing owls are seen bopping their heads to some booming beats. Men ages 16-20 gave the ad a score of 609, the highest of any other age group, which reveals part of the reason why this ad was ripe for a more targeted audience that YouTube can provide. 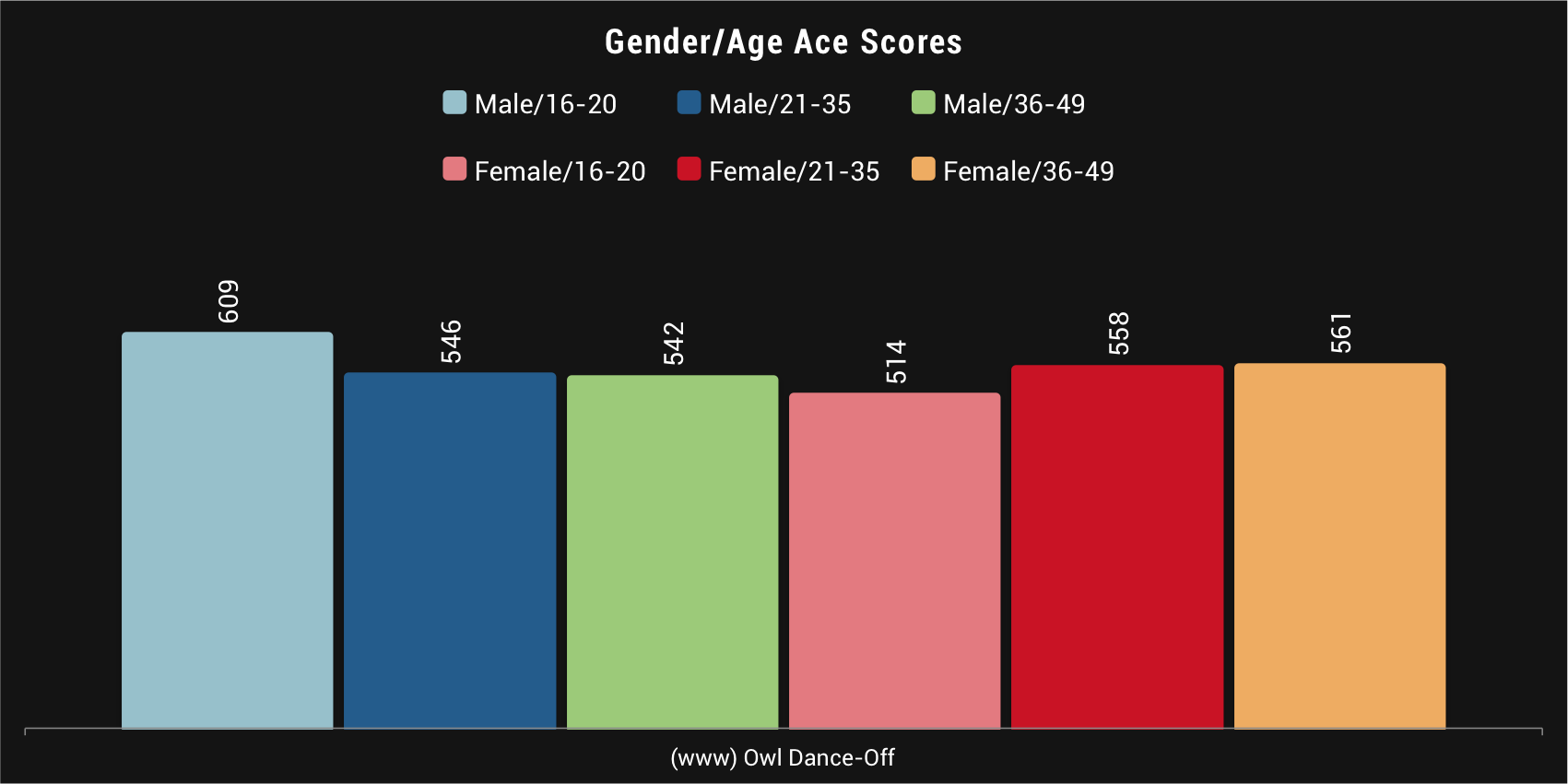 As the word cloud, below, reveals, the music is one of the main reasons why the ad did not resonate with some age/gender demographics. However, overall, consumers still appreciated the “cute” (mentioned by 19% of consumers) owls and how “funny” (11%) the ad was.

Interestingly, 6% of consumers mentioned the word “camera,” often mentioning that either they love GoPro cameras or that this ad did not make them want a GoPro camera anymore than it did before. This lack of product connection combined with the sheer adorableness of the ad makes it a perfect ad for GoPro’s YouTube channel.

One of GoPro’s biggest selling points is that the small, versatile camera can be attached to nearly anything, providing a unique point-of-view. “Pole Vaulting with Allison Stokke” is no exception to that amazing view and received an Ace Score of 594. The ad especially resonated with consumers on an emotional level, receiving an Emotional Sentiment score of 68 out of 100, 24% above Go Pro’s average. Reading through consumers’ 327 optional responses for the ad, it’s obvious that people felt an adrenaline rush watching Allison pole vault from several different angles. 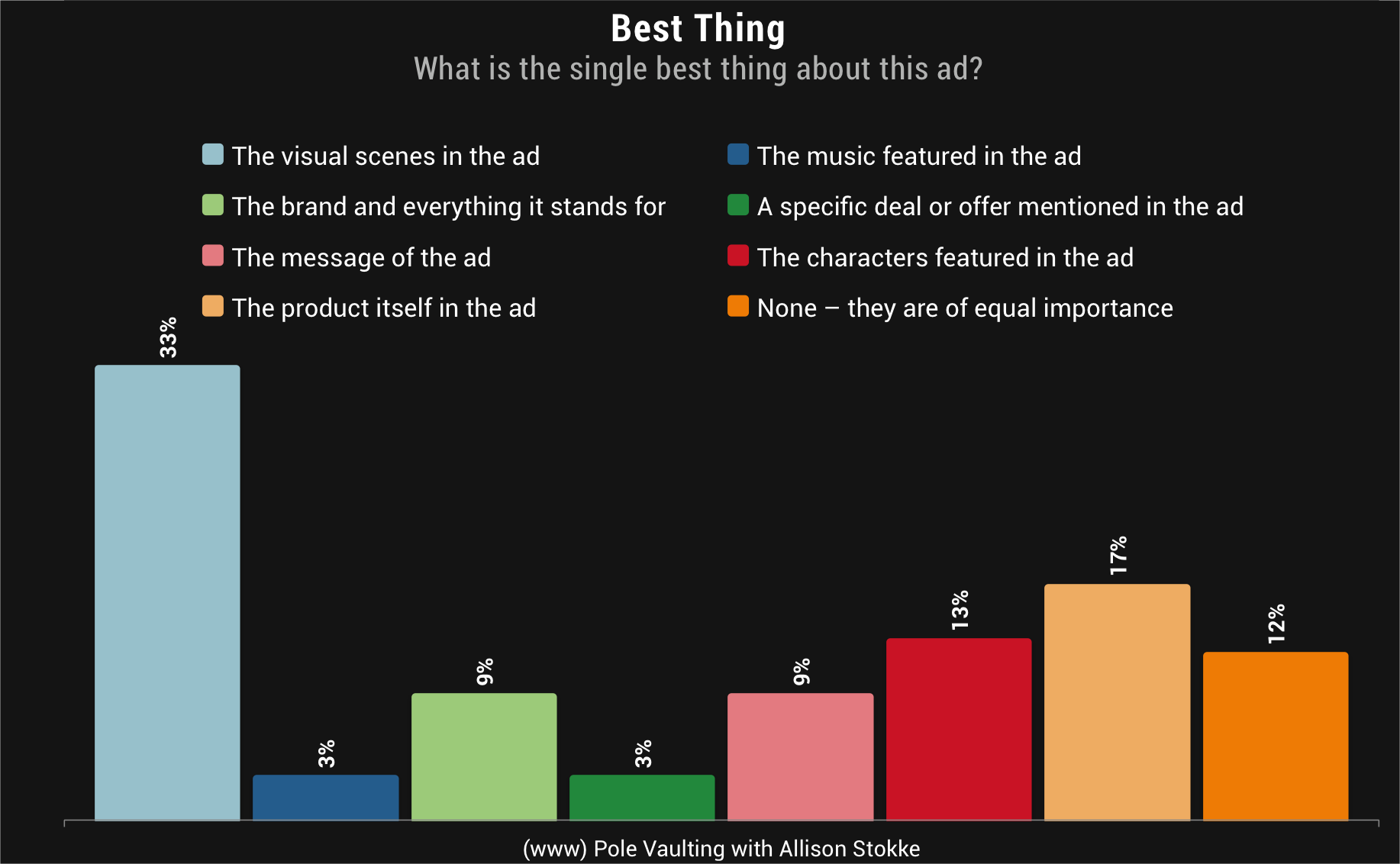 In fact, looking at the stats and consumer comments for the spot, this ad may even be appropriate for a TV viewing audience given its mass appeal through engaging scenes and a captivating story.