If it feels like you’ve noticed Ryan Reynolds in a lot of advertisements this year, your hunch wouldn’t be mistaken. We’ve tested more ads (13) featuring Ryan Reynolds this year than any year in the past – whether it’s him standing front and center, or providing a voice-over with his comically well known yet oddly enchanting Deadpool timbre (aka his normal voice).

From Aviation Gin to Mint Mobile, Maximum Effort Productions, another one of Reynolds’s companies, has released creative work to the public on what seems like a weekly basis. Mr. soon-to-be known as “Free Guy” also just so happens to have a birthday right around the corner on October 23rd, so we decided to celebrate by diving into the insights of some of his latest and greatest ads this year, starting with…

Providing viewers with an “honest” glimpse into a day in the life of Laughing Man coffee founder and A-list celeb Hugh Jackman, with a narration done by none other than Reynolds himself, served as a mightily successful combination amongst viewers of the ad. With an Ace Score of 689, “Nice Morning” scored above the industry norm – across the board – on all of our traditional metrics, which resulted in a score 19% higher than the 561 coffee category norm.

As a matter of fact, this spot’s Breakthrough score (which is a combination of Attention and Likeability) ranked as one of the highest in Q3. This performance drove positive purchase intent among 65% of viewers after a single viewing, a +18% increase from the 1-year coffee category norm.

With quite the Breakthrough feat accomplished, it’s important to understand the emotional fuel that powered this ad’s success with viewers. “Nice Morning” fired on our Love It and Prodtastic (short for “product” + tastic) EMOs due to the appealing coffee and hunky Jackman-filled scenes. But most importantly, the Funny emotion stood out amongst the rest, making this a successful set of emotions for this ad. 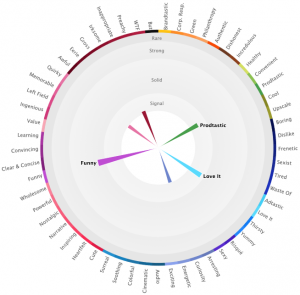 “That was hilarious! I love that it was narrated by Ryan Reynolds. I didn’t realize that until the end, I definitely want to see that again. I almost don’t know if this is a real coffee brand. Very clever and very well done!” Female 36-49

“Funny, grabbed my attention, and had some dark humor to it. Then they wrapped the end of it up with the brand. Overall very good!” Male 21-35

“This ad was hilarious and so fun to watch. Not to mention the actual brand donating money to fair trade farmers. This ad was a perfect combination of wit, humor, and product knowledge.” Female 21-35

Fun fact: “Nice Morning” also featured a dog. Why’s a pooch important you ask? Well, beside it being Jackman’s actual dog, Dali, seven out of the ten highest-scoring ads on Breakthrough (Attention and Likeability) featured a dog in Q3 as either the center of the storyline or as an emissary to support the ad’s narrative, and likely for this ad, created a stronger and more emotionally relatable connection with viewers.

Up next is arguably the most important ad of the lot, largely due to its Message, but also because it’s narrated by Ryan Reynolds’s very own mother! This Mint Mobile spot featured scenes depicting Reynolds’s growth from childhood through adulthood in a series of photos. It’s obvious where Ryan gets his humor from as his mom, Tammy, poked fun at his inability to call her more often – even though he’s the owner of a mobile phone company. The ad then concludes with a reminder for viewers: “don’t be like Ryan, call your mom.”

31% of viewers selected the Message as the Single Best Thing, which drove a Relevance score 16% above Q2 Wireless advertising norms (when it aired). More impressive were its Attention and Likeability scores, which were 17% and 18% above those same norms. Ryan Reynolds was able to nail another breakthrough spot with the emotions that were evoked. “Mother’s Day Message” registered signal on Heartfelt and Narrative emotions, and similar to just about everything Reynolds is involved with – Funny as well: 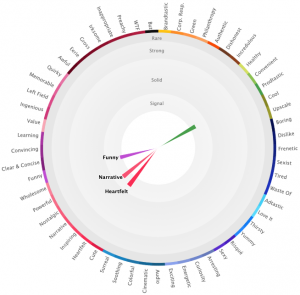 Coming out on top as the funniest of all 18 Reynolds’ spots we’ve scored is Aviation Gin’s “Arlene’s Big Leap” starring Arlene Manko celebrating her first “legal” drink after waiting 30,679 days (vs. the norm of 7,699). The ad details Arlene’s life story and the unusual circumstances around her long-awaited 21st birthday. Taking a note from his Deadpool days where he “learned to use character in place of spectacle,” Reynolds let Arlene take center stage as he narrated. She stole the show with 33% of spirit drinkers naming her the Single Best Thing about the ad.

Again, Ryan Reynolds delivered an entertaining spot with Attention and Likeability scores significantly above Liquor norms. With a voice-over done by the iconic Van Wilder himself, this spot fired on a wide range of emotions, with Spirits Drinkers taking notice of the spot’s witty and Ingenious humor that is told so well throughout: 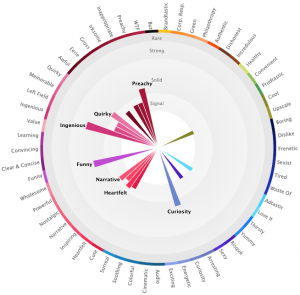 If we broaden our view a bit and take a look at the long line of work that involved Reynolds, Hyundai’s Super Bowl 50 pre-game spot “Ryanville” would be the runner up as the second-highest on Ace Score coming in right after Laughing Man’s “Nice Morning.” Leveraging Ryan’s status as a Hollywood hunk, Hyundai resonated best with females — and possibly sparked some jealousy among male viewers. Females found it Funny, Arresting and Ingenious while males thought it was Tired, Irksome, and a Waste Of their time. 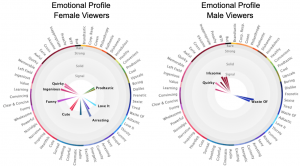 If an ad has the Reynolds touch, you can expect an Attention-grabbing, Likeable spot with his signature humor. While only 25% of ads score on our Funny metric, 100% of Ryan Reynolds-involved spots do – we’d expect nothing less from our man. Reynolds even echoes the importance of emotion in advertising in his recent presentation for Brandweek “I actually love stuff that isn’t necessarily hyper ironic or will permeate the zeitgeist with hilarity. I like stuff that is emotional too. And those two things travel the best, virally speaking—emotion and humor are two things that really move the needle in a big way.”

Happy Birthday Ryan (we hope you enjoyed our gift…we mean, this blog)!

Make sure to check out Ad Age’s article for Reynolds’s birthday, which highlights the top 10 best Ryan Reynolds ads, here.