With the cancellation of March Madness and postponement of the Olympics, not to mention all the other changes to live sports, TV is having a rough go in 2020 due to COVID-19, making the first Presidential Debate a hot ticket for advertisers trying to reach a large US audience. A couple of the ads that ran before or after the commercial-free, 90-minute debate waded into politics in a seemingly impartial manner: encouraging voter turnout. They are some of the latest in a crowd of 40 ads from 19 brands that tapped into election themes with hopes of being topical in 2020.

As the polls heat up, we’re offering a closer look at those 40 election-themed ads, where 93% have encouraged voting in some capacity:

Can Brands Mix with Politics?

“Never talk politics, religion or money in polite company” used to be a common etiquette rule. But times have changed. People share personal opinions with the world (wide web) at the tap of a button, and they expect brands to take a stand just as easily on today’s social and political issues.

Political party lines influence these attitudes with Democrats most open to any political messaging from brands, and Republicans least open: 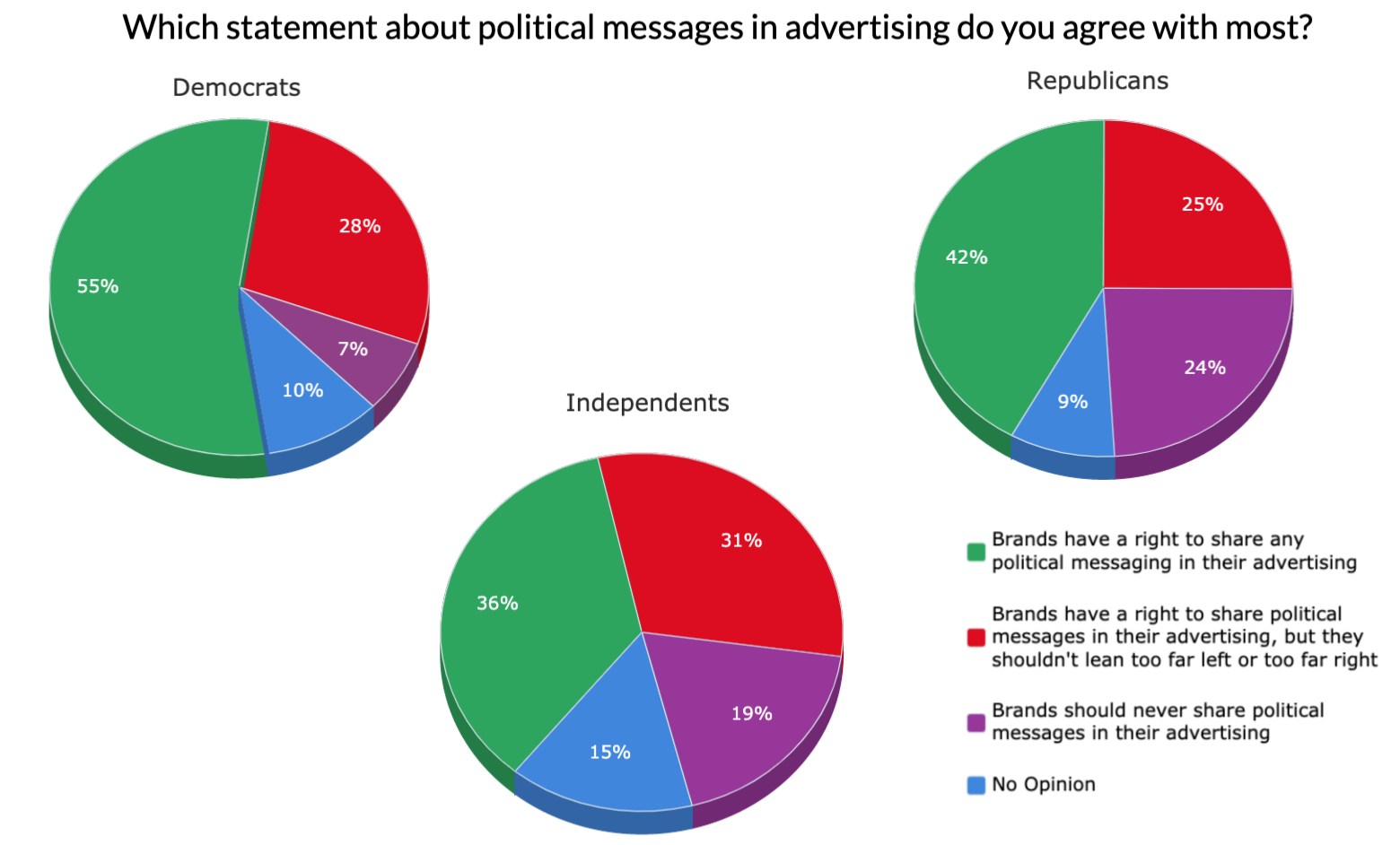 Democrat (Male 36-49): “I pay attention to anything political, so this was a good one to grab me. I like that it is encouraging voting without a partisan bent and also portraying itself as an entity that assists the democratic process”

Democrat (Female 36-49): “The whole point of America is to speak up and talk about things. I get the joke about debate drinking games and how it’s dangerous to talk politics if you are drinking or with drunk people but repeating “don’t debate…” just really irked me.”

Republican (Female 16-20): “This advertisement encouraged Americans to vote in the election without expressingly encouraging either party, which is something I like and do not see in usual ads concerning the election.”

Republican (Male 21-35): “You couldn’t get anyone that wasn’t a far left, America hating hollywood elitist? Good lord, everyone of those people aren’t who represent America.”

Independent (Male 36-49): “I don’t really like brands getting political just make your product”

Independent (Female 21-35): “This made me stop to see what was going to happen, and I liked the message well-enough but I just don’t like companies getting political and find it upsetting.”

Nearly half of the 40 election-themed ads we’ve tested included other issues along with voter turnout messaging. Climate change, women’s rights and Black Lives Matter were the most common subjects. However, as of the end of September 2020, COVID-19 and related issues, including the economy and healthcare, remained top priorities among a majority of US consumers. Only UBS touched on the matter that was deemed most important to viewers (COVID-19) with an ad promoting its Election Watch 2020 virtual events series. 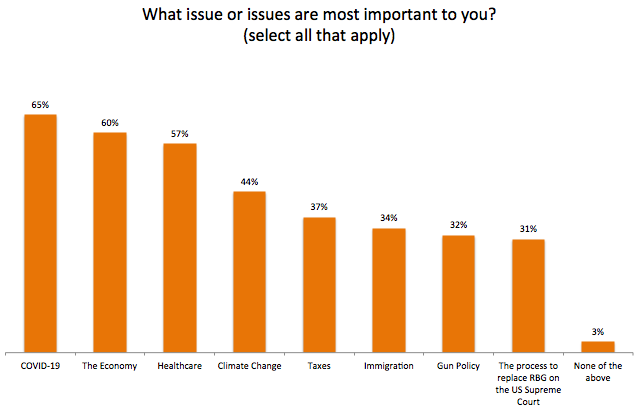 Voter Turnout Messaging is Most Common for a Reason

On its own, encouraging voter turnout has the widest appeal as it’s one of the few topics that remains bipartisan in the contentious realm of US politics. All but two of the “Vote” ads we tested achieved scores on Empower, which measures positive Cultural Perception and indicates when viewers find an ad’s message motivating, inspiring or encouraging. With only 12.5% of all ads scoring on Empower, it’s telling how important the topic is to people that such a high percentage of vote ads score on the metric. 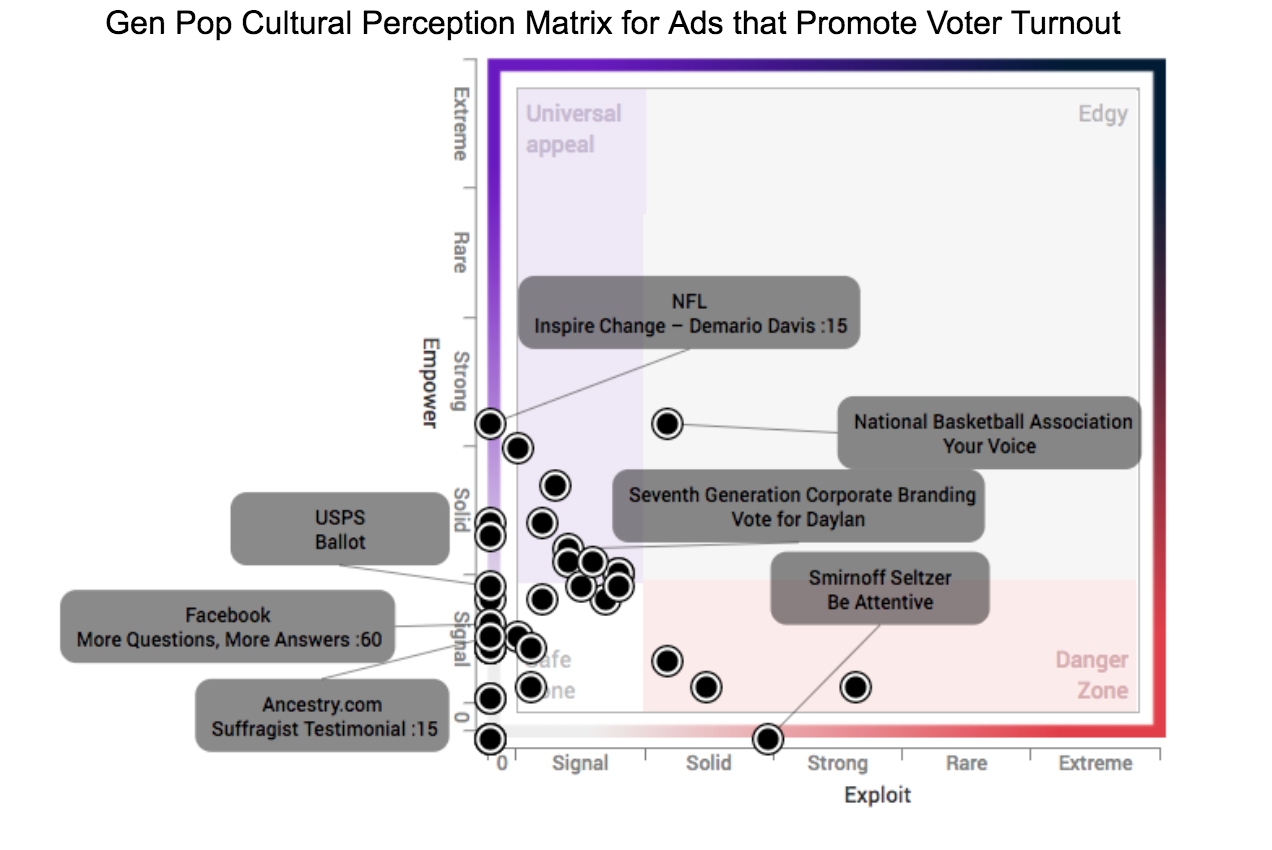 In one of the two non-empowering ads above, Smirnoff rolled voting into its more forward election-themed message of “Don’t Drink and Debate.” It ruffled a lot of feathers, which resulted in a Strong score on Exploit. The other was targeting a niche audience, so it couldn’t muster up enough signal to score on Empower among Gen Pop viewers.

In most cases, positive cultural impact outweighed negative. Thirteen ads pulled off Empower without any Exploit signal, more than half of which managed to tie-in climate change or women’s rights. The two ads that touted environmental issues did so in a subtle manner that minimized the number of viewers that took offense. Meanwhile, those that mentioned women’s rights did so with a historical perspective as opposed to focusing on modern feminist issues.

For example, five spots from Ancestry.com’s 2020 campaign celebrating the 100 year anniversary of women’s right to vote were among the 13 ads that viewers found Empowering without any Exploit signal. The brand focused on authentic customer narratives about discovering ancestral ties to the Women’s Suffrage movement:

But Even Voter Turnout Has Its Risks

Unlike other causes (eg. supporting small businesses), politically-themed ads﹣even the most benign at face value﹣tend to evoke a sense of exploitation among Gen Pop viewers. Some consumers are keenly observant when it comes to politics ﹣ they’re looking for any indication that a brand is promoting a one-sided agenda. To illustrate the complexities advertisers face, these two verbatim comments were responses to the exact same ad:

“I do not like the bias of this ad. Bringing up politics and Russia and trying to slip the democratic message into a commercial that should be for everyone turns me off. I don’t want politics taking over a product I may want to buy” Female 50+, Republican

“It seems like they are trying to embrace some LGBTQ+ diversity, which is great, but this ad feels like a fail. It seems like it belittles the actual issues that this community faces. It’s trying to be fun, but there’s nothing fun about this.” Female 36-49, Democrat

Sixty-percent of the election-themed ads we tested scored on Exploit, which measures negative Cultural Perception and indicates the degree to which an ad might offend viewers in some manner (stereotyping, pandering, glorification). The source of exploitation varied by brand and creative. However, there were some reoccurring general factors like polarizing celebrities/characters, promoting partisan causes (in a preachy manner), and making inauthentic links to a brand:

“Horrible ad. The visuals and characters were so extreme, there’s nothing about it that was authentic and the tonality was very negative.” Female 36-49

“Do not use American patriotism to pimp your products, it leaves a bad taste in my mouth” Female 36-49

“Visually it is really nice but it feels so forced. Ads for clothing brands shouldn’t be political just make an entertaining ad remain opinionless” Female 50+

With sustainability intrinsic to its product and purpose, Seventh Generation didn’t take many by surprise with its campaign urging eligible voters to consider younger generations and the future of the planet. Of the three ads tested, the anthem video, “Vote for Me,” was more vague in its ties to climate change and as a result, resonated better with all viewers.

The other two ads made more dire and direct pleas related to the environment resulting in more polarization among viewers. Empower and Exploit signal increased for both ads as viewers on either side of the climate change debate were emboldened by their preconceived stances in support or opposition of the issue. On top of that, component scores were dampened compared to the more agreeable “Vote For Me”:

Starting in September we added a Political Party Affiliation question to the end of our surveys as politics continues to play a significant role in shaping US consumers’ attitudes and opinions. Among election-themed ads tested since then, Republican and Democrat perceptions often juxtaposed one another:

Resonating with both Democrats and Republicans is possible, but it’s tough. Just three of the ads scored above both segment’s all ad norms: USPS’s “Ballot”; Facebook’s “More Questions, More Answers :60”; and T-Mobile’s “Voice Your Vote.” These three ads were impartial in their messaging as they encouraged voting with specific resources and reassurance for all.

Democrats scored recent election-themed ads significantly above their all-ad norm while Republicans scored most well below. This contrast in resonance echoes their attitudes towards brands using political messaging in ads. 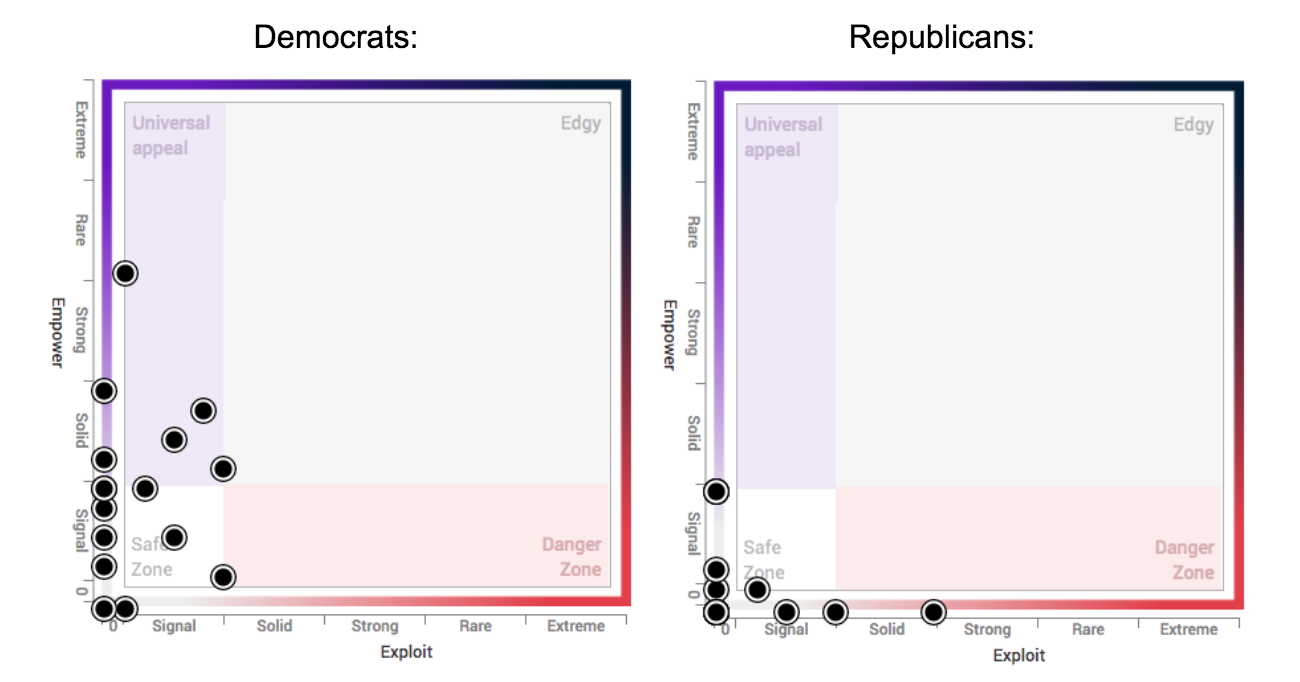 Before running any election-themed ads, advertisers should be aware of who is receptive to their messaging, and how those who aren’t might be negatively influenced. Even the most bipartisan of pleas can set off hypersensitive consumers if they perceive any hint of biased treatment. From subtle clues like celebrities to more obvious ones like a particular cause, there are a lot of factors that could tip the scales and hurt the message’s impact.

Republicans (and Independents) reject political efforts from brands more than their left-leaning counterparts. That said, it’s possible to rally support from all sides as long as the messaging sticks to impartial urges to vote and strikes the right balance among any other political elements. Those that want to wade into a certain issue should do so in a subtle manner so as not to come off as preachy. Additionally, approaching modern issues with a historical perspective that celebrates how far we’ve come lends towards a more inclusive way to communicate brand values.

Q3 Continues to Empower Viewers While Humor Made Its Comeback