The country seemed to breathe an audible sigh of relief with the light hearted nature that brands took in Super Bowl LIV. Seems that rather than feed into the polarization of the country, companies decided to give the people what they wanted, some laughs. The funniest ads from Super Bowl LIV rebounded from a couple years of lackluster game day chuckles. Thank goodness!

We analyzed a decade’s worth of Super Bowl ad data and found that more than 80 percent of Super Bowl ads contained humor in 2013, but the number dropped to fewer than 60 percent in 2019. Moreover, the average Funny score dropped significantly from 8 points (out of 10) to 6. But 2020 is bucking that trend with signal on par with some of the funnier years from game days past: 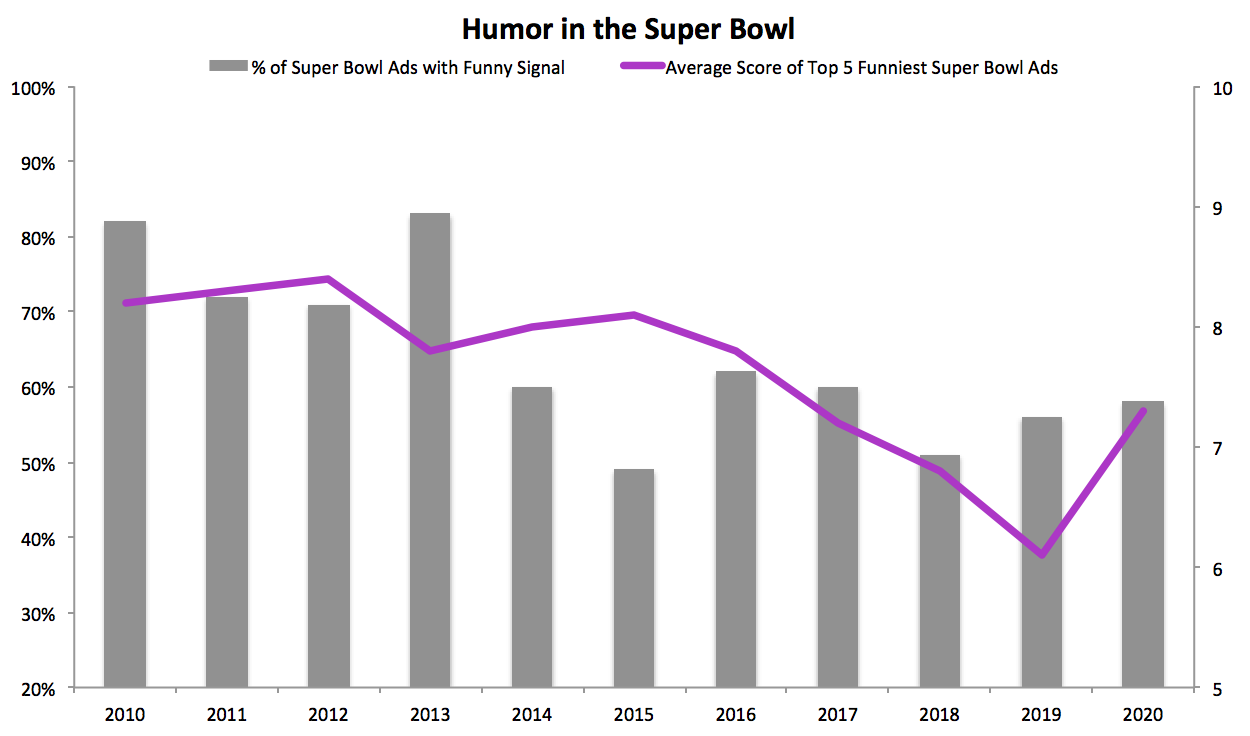 Funny is just one of fifty-seven metrics from Ace EMO, which measures the strength of emotional connection in advertising. Scores are passively derived from voluntary respondent verbatim comments using Natural Language Processing and machine learning analysis. Funny picks up on any phrases close or related to ones like “lmao,” “hahah,” “hilarious!” and “made me laugh,” including synonyms, misspellings, and anomalies.

Each of the ads on this list scored into the Strong signal band on Funny — a level only 0.8% of all ads can achieve.

In a good sign for brands wondering about the effectiveness of Super Bowl spots, most of the funniest ads generated above industry norm Purchase Intent. Doritos, Reese’s and Cheetos raked in the strongest top-2 box intent of all the game day spots at 67%, 64% and 62%. Little Caesars wasn’t far behind at 56%.

Additionally, all four ranked among the top six Super Bowl LIV ads on our Desire score while successfully delivering new product/service Information in an entertaining manner (Attention-grabbing & Likeable) — although for Reese’s it was an old product with an awareness problem. 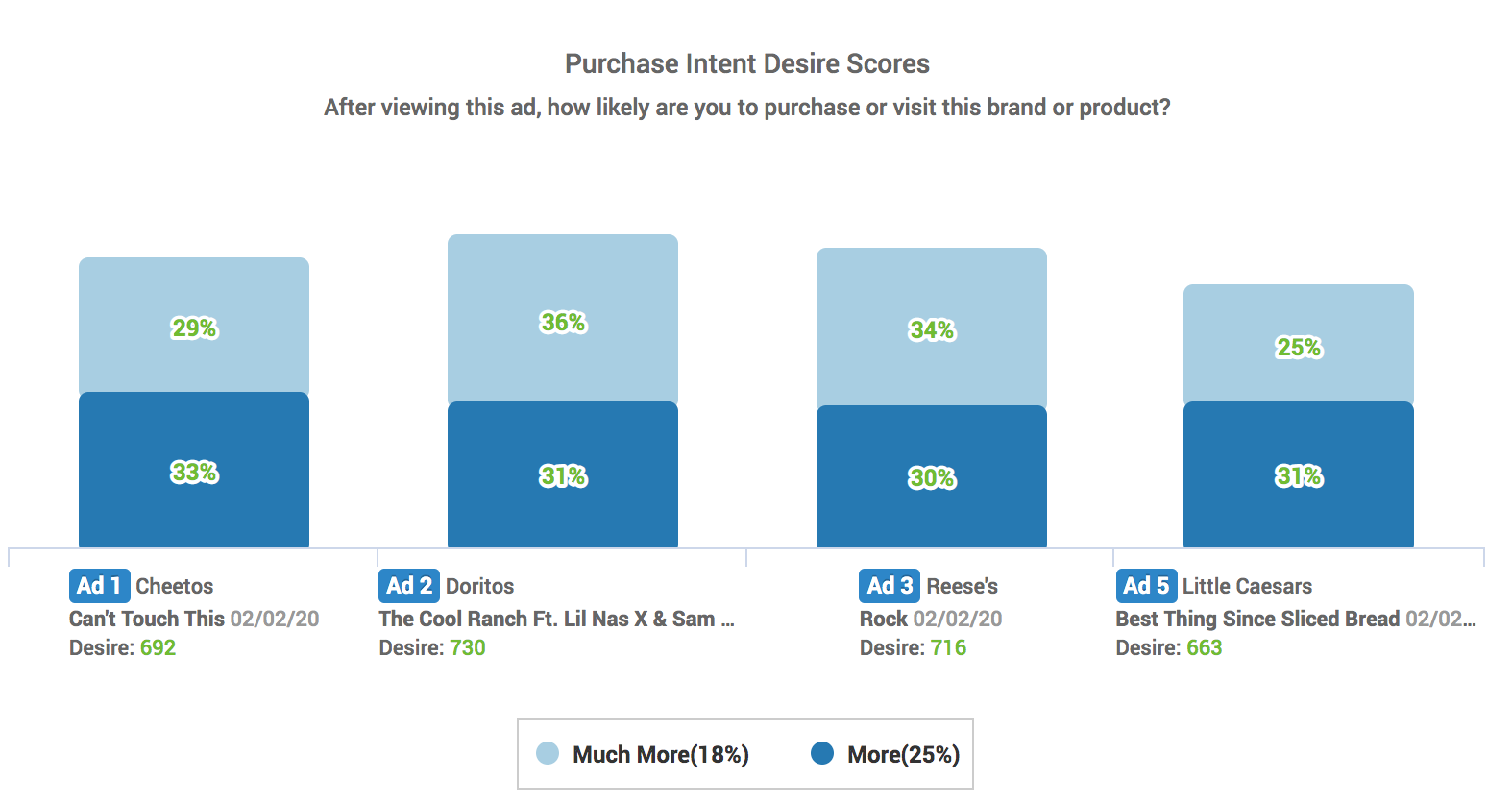 Cheetos and Goodby Silverstein & Partners blessed fans with a relatable brand anthem, MC Hammer’s “Can’t Touch This.” The all-too-familiar Cheetle (Cheeto’s dust) dilemma struck a chord among gen pop viewers who scored this spot above norm on all quantitative measures, with the most success on Attention, Likeability and Desire.

Doritos “The Cool Ranch” is the second spot from GS&P among the funniest. Aside from humor, this creative hit on a wide range of emotions with Strong scores for three emotional metrics (Funny, Love It, Arresting) — quite an impressive feat considering only 12.4% of ads achieve that level of connection on one metric: 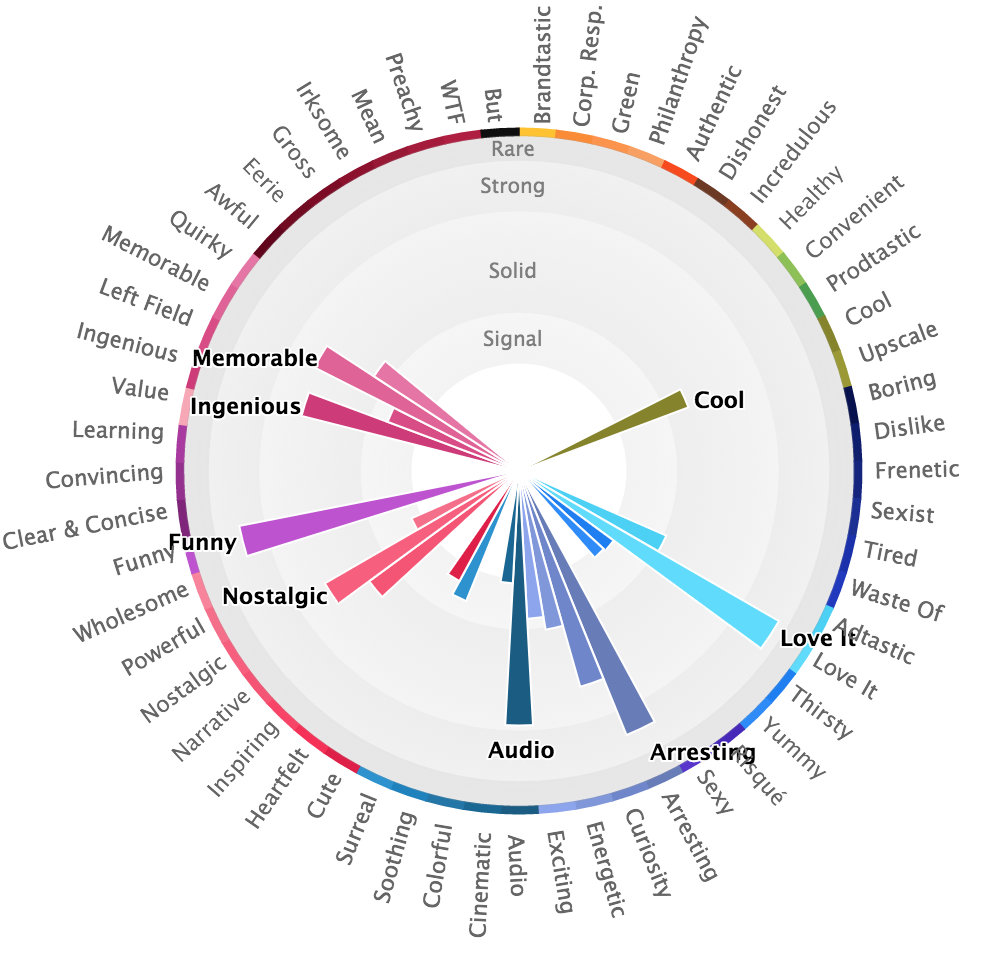 High scores on Likeability and Attention echo the Strong Love It praises and Arresting signal. In fact, “The Cool Ranch” ranks as #1 Most Likeable, #2 Most Attention-grabbing and #3 most effective overall (Ace Score) of all the Super Bowl LIV ads.

For Hershey’s Super Bowl debut, the company flaunted Reese’s Take 5, “the best bar you’ve never heard of.” It’s the only ad on the Funny list that achieved Strong levels of humor without a celebrity’s acting chops. Instead, idioms like “raised by wolves” come to life when a woman is surprised her coworkers haven’t heard of Reese’s Take 5. “Rock” earned spots on our lists for most effective overall (Ace Score) and most Likeable. Viewer comments indicate Reese’s Take 5’s new found awareness will impact purchases:

“I thought it was funny and I will check the bar out just to see if it is indeed the best bar I have never heard of.” Male, 21-35

“I love Reeses’, so it caught my attention to learn they are making different candies.” Female, 16-20

Michelob Ultra & FCB harnessed the Attention-grabbing, Likeable star power of Jimmy Fallon and John Cena in “Jimmy Works Out.” Along with cameos from The Roots, Usain Bolt, Brooks Koepka, Kerri Walsh Jennings and Brooke Sweat, 44% of viewers named the comedic duo (Characters) the Single Best Thing about the ad. “Jimmy Works Out” generated positive purchase intent for Michelob Ultra among 58% of beer drinkers (vs. 51% for 90-day norm).

With the help of Rainn Wilson, Little Caesars announced it now offers delivery and it’s the best thing since sliced bread. The new service was hard to miss for viewers who scored this ad 11% above QSR norms on the Change component.

Quicken Loans showed us a new side of Jason Momoa in its Super Bowl LIV spot. His Likeable nature (named Single Best Thing by a majority of viewers) contributed to a low polarity score in an industry where strong levels are typical. It’s also admirable considering “Comfortable” employed humor, another generally polarizing element. Funny was the top emo that fired, followed by Ingenious. Signal for the latter resulted from impressive special effects and creative integration of the celebrity with the message. 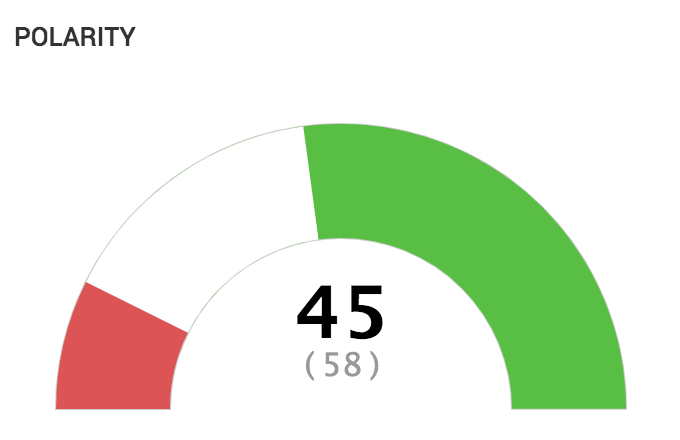 We couldn’t be happier to see humor making a comeback in the Big Game. Congrats to these brands and their agencies!