Nike’s “For Once, Don’t Do It” Rallies Strong Support, But Not Without Controversy

Nike was the first brand to put out an ad addressing racism in the wake of George Floyd’s death and the protests it spurred. The way the country is reacting to this particular incident of racism, with seemingly more acknowledgment, more outrage and more pledges for change, it is likely that we’ll see more brands stride confidently into the conversation where previously they may have dipped a toe or avoided it altogether.

Plenty of research indicates that consumers want brands to engage in social and cultural conversations, but that doesn’t mean getting it right is easy or uncontroversial. The sheer magnitude of pandemic-related advertising indicates that brands recognize that cultural relevance is key for consumer connection.

Nike has been an early advocator and an accelerant for brands making the shift to purpose-driven messaging. Their “Dream Crazy” ads from 2018 featuring Colin Kaepernick put them in a unique position to be continuing their support on race matters rather than just now starting the conversation with their customers.

“For Once, Don’t Do It” is simple and direct in its message and delivery: we’re all needed in the fight to end racism. General population consumers, aged 16-49, found the spot Empowering (more Empowering than 98% of all ads), but not without controversy. The spot garnered more Exploit signal (at a level that only 1.4% of ads earn) than either of the Kaepernick spots from 2018, which were social media wildfire, but actually less polarizing among the general population: 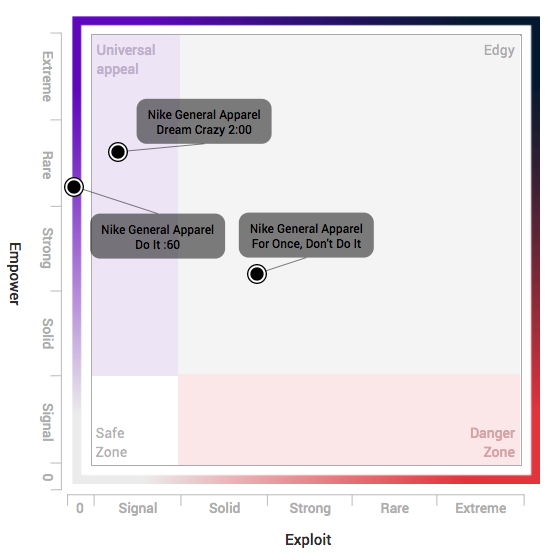 Empower and Exploit scores come from our Cultural Perception measurement system that was built to specifically address the cultural and social messages brands have been putting forth in the last few years. The Empower metric measures the positive impact of an ad’s message, indicating when viewers find it encouraging, inspiring or motivating. The Exploit metric quantifies the negative impact, indicating when ads offend viewers in some manner, whether that’s via stereotyping, pandering, objectification, glorification, portraying racism or sexism, or even a brand attempting to attach themselves to a cause that is not relevant.

An overwhelming majority (60%) of respondents indicated the message was the Single Best Thing about the ad, driving the high Empowerment score. Supportive viewer verbatims were thoughtful and appreciative of the willingness of the brand to engage in the conversation:

“Thank you for this ad. This is exactly the kind of ad that is needed right now and I wish more companies would stand up and take a stance like this. Not that I’m surprised as they were also the same company that stood behind kaep. This moved me to tears and I sincerely hope it airs and people are touched like I was. This is so important and now is the time. no more silence!” — Female, 21-35

“It’s extraordinarily important to change our justice system in order to ensure that the lives of anyone, especially those minorities that already have a reason to fear the police, aren’t in danger of losing their lives. It’s nice to see a corporation, which has much more power than individuals within our society, pushing to support the black lives matter movement.” — Female, 16-20

“I think it is great for companies to step up and put these ads out that are not to promote their product but what their product stands for.” — Female, 21-35

“I don’t think Nike is trying to sell anything in this commercial, it seems like they are trying to bring about a change in our society through their influence. I believe this change is very necessary as its message rang true to me and made the commercial very enjoyable to me.” — Male, 21-35

“I think Nike is a brand that people of all backgrounds can relate to. The brand has the moral authority to lead the country through a conversation about racism and police violence. the ad was simple but highly effective.” — Male, 36-49

At the other end of the spectrum, Exploit signal was driven not by people against the cause Nike has taken up, necessarily, but by other exploitative aspects of the spot, including taking advantage of the situation to sell shoes. The high score on our “But” Emo is also a strong indicator that respondents had internal conflict over the ad: 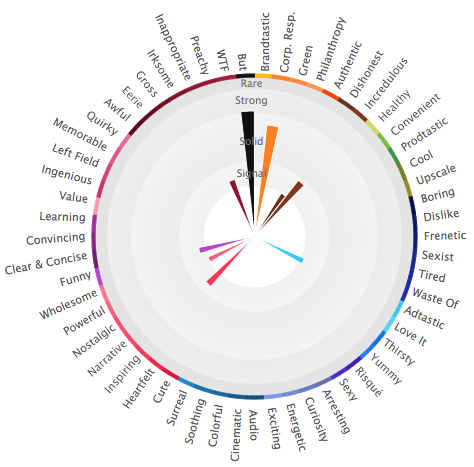 “I do not like the current state of racial tension in this country, but I certainly do not want to be lectured to by a multibillion-dollar company about what I should do.” — Male, 36-49

“Wow they didn’t waste any time to make profit from the pain and suffering of others… it’s like they already knew this was going to happen.” — Female, 21-35

“It was a great ad…until i learned at the end that the company is taking advantage of negative world events to try to make sales. What could have been thought-provoking and unifying was destroyed in the final seconds when that logo appeared. It screamed “we’re using death and destruction to promote our products!” not good.” — Female, 21-35

“I really dislike this ad. I don’t think that “brands” should be putting their message out there in an ad platform. Using this situation to put eyes on your product is kind of gross. I do agree with the message, but if you were really wanting to be part of the change, then don’t put your branding at the end of it.” — Male, 21-35

Some of that But signal stemmed from viewers either calling on Nike to do more or calling out its contrasting business practices, like sweatshops and a lack of diversity on its executive team (similar to the social media backlash):

“I appreciate the message but it surprised me that the brand was Nike and not for a racial equality organization. Nike has way more power than I do, so i feel like if I’m going to be sold on what a good, caring brand Nike is, then I should be told in the ad how *Nike* is contributing to the fight for racial equality.” — Female 16-20

“I like that it’s taking a stance on serious issues. I would like to see money and work go toward building community relationships, but the message was good.” — Female 36-49

“It got a little bit boring, but it had a good message that I appreciate, and I appreciate large brands taking a stand during this critical time. I do wish Nike had said something more about their donations or what they were doing as a company to help end the injustice, though.” — Female 16-20

As may be expected, “For Once, Don’t Do It” performed better among the younger and female demographic from both a Cultural Perception perspective and overall effectiveness: 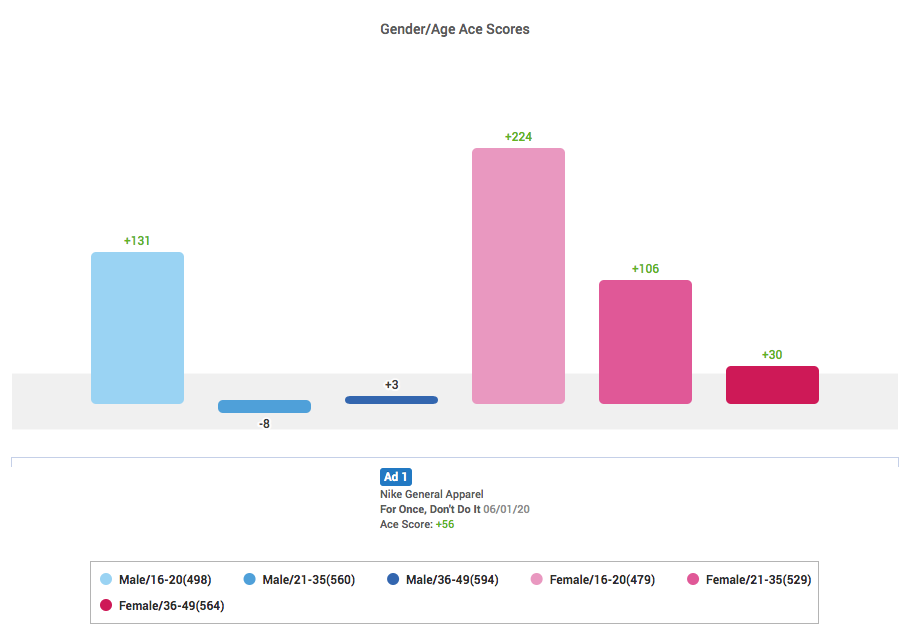 After their Kaepernick spots in 2018, analysts predicted huge losses for the brand for taking such a controversial stance. Sales soared, rising 31%. Our data indicates that “For Once, Don’t Do It” scores on par with the Kaepernick spots for positive purchase intent, and lower on negative purchase intent suggesting potentially lower numbers of “boycotters” after this ad.

After viewing this ad, how likely are you to purchase or visit this brand or product? 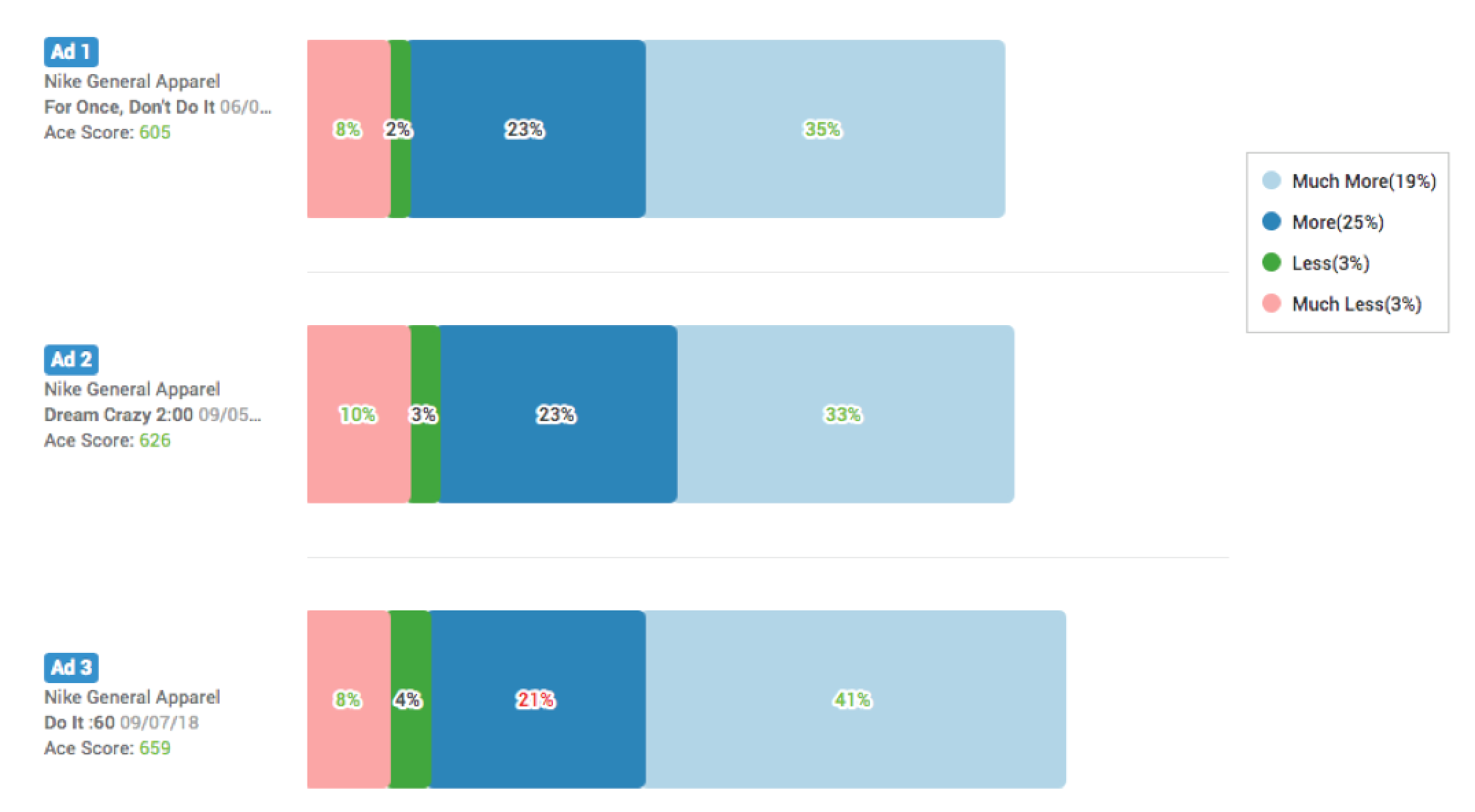 Nike sets a high bar for other brands willing to enter the conversation about racial tension in America. However, consumers will be expecting these brands to walk the walk, not just talk the talk, a lesson taught and learned by brands directly confronting the coronavirus pandemic. Our advice remains the same for brands taking on culturally sensitive material: Actions speak louder than words. Be specific. Consumers want to know, concretely, what brands are doing to actually help.