In a rare event, we have two Category Overachievers this week—Revlon and Walmart. Both advertisers successfully stirred consumers’ desire by focusing on a specific product and in doing so outperformed their competitors by 18.2%. TGI Fridays earns the title of highest Ace Score this week with an appetizing new deal.

Revlon’s “Olivia Wilde: Glossy Wet Color” earned an Ace Score of 563 while Walmart’s “Only The Freshest” returned with an Ace Score of 636 – both outperforming their respective category’s 12-month norm by a healthy 18.2%.

With the debut of Revlon’s newest ad, the Cosmetics category proves, once again, that standout creative can come from anywhere. “Olivia Wilde: Glossy Wet Color” combines colorful visuals and ample information to produce a seemingly effortless 0:15 ad that resonates with the female consumer.

Women rated the ad well above the Cosmetic’s norm, with only 26 points of difference between the three age groups. 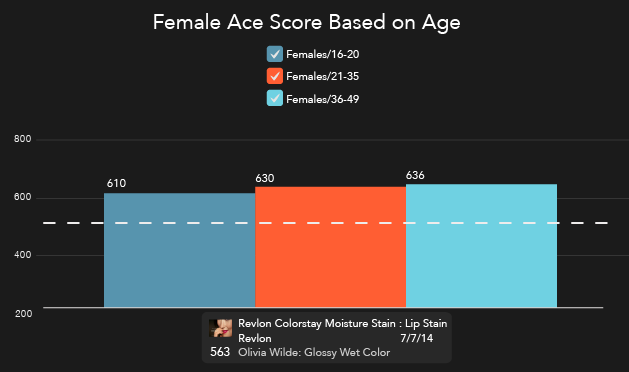 After watching the ad, many women mentioned that they “love” (10%) the lip stain, Revlon or Ms. Wilde herself, or that they “want” (5%) the new product with many commenting about the long lasting message and the way the actress’s lips appeared.

While some other Olivia Wilde ads have come close, this winning ad is the first time Revlon Cosmetics has broken the 500 Ace Score mark, going back nearly five years.

Transitioning to our other Category Overachiever, Walmart’s “Only The Freshest” is one spot in a series of ads focused on the “farm fresh” produce Walmart offers. With scenes of juicy peaches, a luscious farm and friendly farmers, after watching this ad, consumers were ready to take a bite out of Walmart’s produce section.

“Only The Freshest” achieved above norm Ace Scores with nearly every age/gender demographic. The ad performed especially well with women who scored it nearly 10% higher than men. 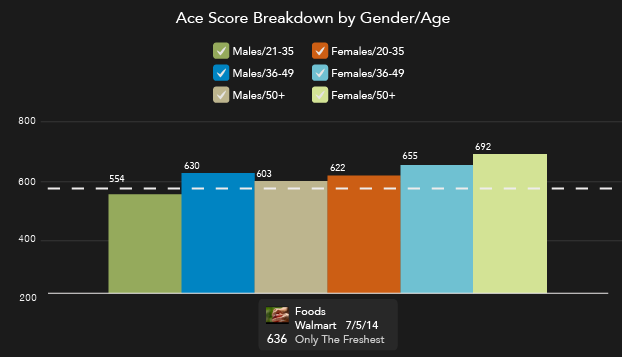 While the dialogue from the farmer was a nice touch, it was other aspects of the ad that made it a winner with consumers. Twenty-one percent of respondents said that it was the peaches that were the best thing about the ad. Close runner-ups were the ad’s message (17%), the visual scenes (16%) and the Walmart brand (14%).

The visuals of the juicy peaches and farm fresh food culminated in an Emotional Sentiment score of 69, which is 33% higher than Walmart’s average.

Interestingly, the 0:15 version of the ad did not perform nearly as well as the 0:30 version. The recut scored nearly 100 points lower than the original. Reading the analytics, the recut was lost on men of all age groups. A read through the ad’s optional comments tells us that many men felt the shorter version was not any different than any other Walmart ad.

With all these scenes of delicious fruits and veggies, Walmart’s push for changing consumer opinon about its produce may be successful. The key, of course, is putting the right ads in front of the right consumer.

TGI Fridays’ latest promotion has already drawn copious amounts of press coverage, and now, with the launch of its latest ad, we also have the American consumer’s opinion. “Endless Apps” came in with an Ace Score of 704, the highest score of any ad to debut last week. Scenes of tasty potato skins and saucy buffalo wings combined with the word “endless” seemed to have struck a chord with consumers’ stomachs.

Every female age demographic scored the ad above 700. Women ages 21-35 were especially excited about the deal, scoring the ad 9% higher than the ad’s overall Ace Score. 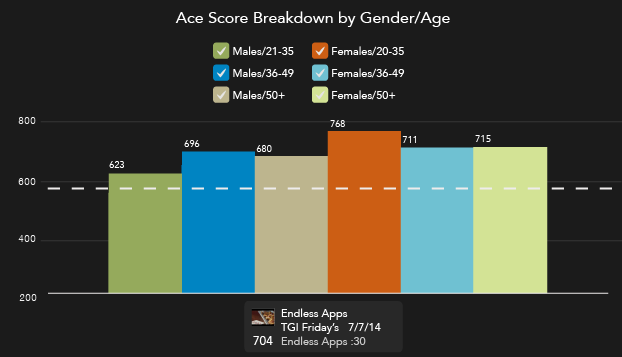 While some TGI Fridays critics are saying this promotion will not bode well with consumers, our data tells a bit of a different story. Only 3% of consumers, upon watching this commercial, said they would never consider purchasing from TGI Fridays. And who are these 3%? Well, it’s tough to categorize them. The ad scored well not only with every age and gender demographic, but also against every income level. In fact, consumers who make over $75k a year gave the ad a slightly higher score than consumers who make between $40k and $75k.

As our data confirms, the $10 appetizer deal was the best thing about this ad with 31% of consumers indicating that option on the survey.

The word cloud below shows just how excited consumers are about the “Endless Apps” deal. Of the 323 respondents to leave an optional comment for the ad, 9% used the word “endless” and 10% mentioned the “deal.”

While the jury is still out on whether or not this deal will have an effect on TGI Fridays’ dining population, from an advertising perspective, TGI Fridays is set to make an endlessly scrumptious impression.