NFL Draft: Were the Ads as Successful as the Event?

Current COVID-19 circumstances influenced ingenuity for the first-ever virtual NFL Draft. The league partnered with Amazon Web Services, Verizon, Bose and Microsoft (Teams) to coordinate production for the three-day televised event, which relied on 600 camera feeds from homes across the country.

The NFL Draft scored big, pulling in more viewers than ever before with the average audience for the three-day event growing 35% over 2019. The First Round brought together the largest crowd of 15.6 million viewers. This success speaks to the longing for sports-related content during the current dry spell.

It also provided an opportunity for brands to connect with consumers over a cultural event other than the seemingly inescapable pandemic. Approaches ranged from product-centric to NFL Draft tie-ins, while the topic of COVID-19 occasionally came up.

We looked at the ads that broke on the premier night (Round 1) to see which brands could replicate the success of the event itself.

The three highest Ace Scores were COVID-related ads with Geico’s “Thank You” and Lowe’s “Unity” tying for first. While all three significantly beat recent all-industry advertising norms, they didn’t stand out in terms of pandemic-response ads. Nevertheless, these ads excelled on Likeability and Relevance components compared to the average ad (per usual among COVID-19 themed spots): 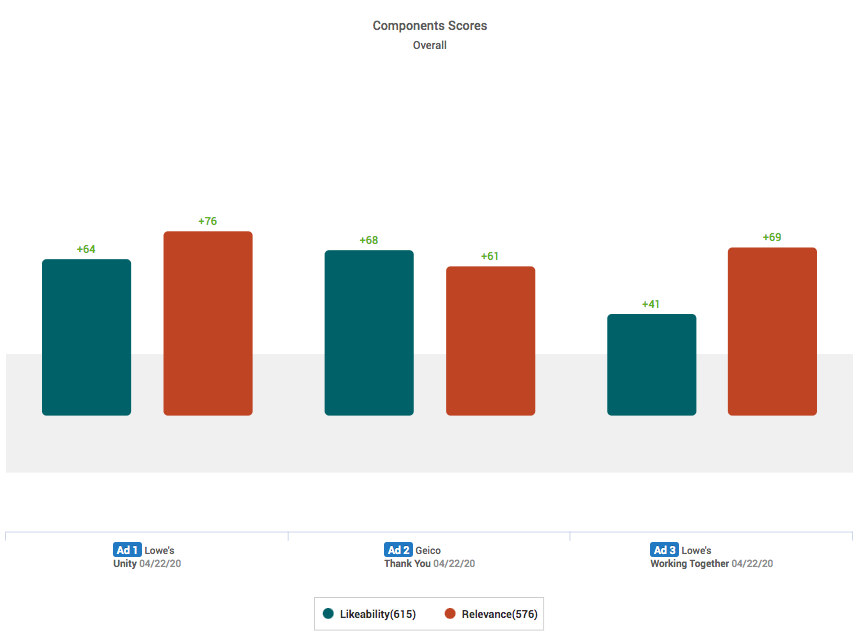 Also common among COVID-19 ads, the top three elicited Heartfelt emotions in viewers and portrayed the brands as compassionate (picked up by Corporate Responsibility on the far left of the heat map). Both Lowe’s spots, “Unity” and “Working Together” scored highest on those metrics:

Ranking fourth among the Gen Pop audience, Aflac’s “Gratitude” was the highest scoring non-COVID ad — although, is anything really non-COVID related these days? Likeability and Relevance were the driving components behind its success, each scoring 5% above the all-industry norm. The relatable characters and their all-too-common complaints about medical expenses struck a chord with viewers, 52% of whom expressed increased purchase intent (vs. 32% insurance industry norms):

In another non-COVID spot, “Cop Show” features the recognizable “Allstate Guy” — Dennis Haysbert — in a comedic scene that reminds viewers about the brand’s Accident Forgiveness. The humor, which is more characteristic of Allstate’s Mayhem, contributed to strong scores on Likeability and Watchability. The entertaining and informative spot generated top-2 box purchase intent among 38% of all viewers, significantly beating auto insurance norms and performing on par with Geico’s COVID-19 spot mentioned above.

COVID-19 wasn’t a shoo-in for success during the NFL Draft with some of the lowest scoring ads falling under this category. As we’ve uncovered in previous research, the overall effectiveness of COVID-19 ads is starting to weaken as more players have entered the field and some consumers have expressed wear out from a sense of “sameness.”

However, the lowest scoring ads also had NFL tie-ins which contributed more to the lower Gen Pop scores (polarizing between fans and non-fans) than COVID-19. On average, NFL fans (ranging from “A little bit interested” to “Very interested”) scored these ads 122% higher than those with zero interest.

Of the four NFL Draft tie-in spots that broke on the premier night, Gillette’s “Every Day is Gameday” resonated best with fans who were impacted by the Inspiring, COVID-19 related message and its Authentic connection to the athletes and the product (shown in the emotional profile and illustrated in a sample of viewer verbatim comments below): 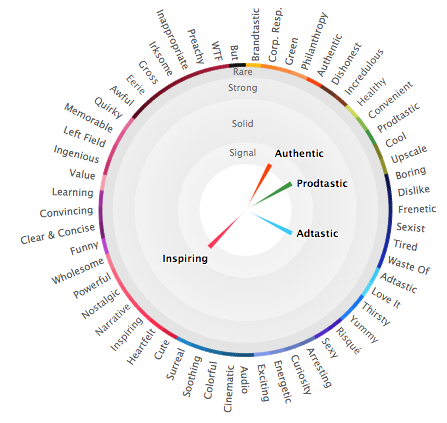 “I thought it captured their product perfectly and sent a wonderful message to football fans.” Male 36-49 “Very interested”

“I like the add because it shows areal men in real situations, not fake models” Female 21-35 “Somewhat interested”

“This advertisement feels very authentic and heartwarming, it does not feel like it is trying to profit off anything.” Male 16-20 “A little bit interested”

“I liked how it addressed our current situation rather than shying away from it. It’s our reality right now, and I think to ignore it is not very smart. And I think it shared some positivity as well.” Female 36-49 “Somewhat interested”

As is often the case with co-branded efforts, Gillette’s Brand Recognition resulted in a low 62% of Gen Pop viewers mentioning its name. Meanwhile, 22% answered “NFL” due to the emphasis on the league and its players. That ad had the most mentions for the NFL among the tie-in spots — the next highest being 13% for Bud Light’s “Keeping the Tradition” featuring the commissioner, Roger Goodell.

Also among the bottom half of ads were product-forward spots from Adobe and Head & Shoulders. For Adobe’s “Ultimate Document,” the music captured viewers’ Attention, but Frenetic visuals and a lack of  product details lead to well-below norm scores on Likeability and Information. In “Anti-Dandruff Styler Do More,” Head & Shoulders introduced its new shaping pomade with an execution that fell flat with viewers. Among males, the repetitive script along with monotonous visuals were turnoffs, but that helped the Product Itself stand out as the top Single Best Thing about the ad.

At the end of the first night, Lowe’s and Geico’s pandemic messaging scored best with Gen Pop viewers while more conventional ads from Aflac and Allstate generated strong purchase intent. The breaking NFL Draft tie-in ads had a hard time competing with fans’ interest in the event itself, but a Likeable and Relevant spot from Gillette resonated best with this intended audience.

Gen Z is the Toughest Audience for COVID-19 Ads. Here’s What Works with Them:

How Wireless COVID-19 Ads are Faring