Budweiser’s latest ad, “Reunited With Buds,” gives us a taste of what the rush and excitement of reopening can feel like, alongside the familiarity of the brand’s universally loved puppy and Clydesdale duo. Although states and counties across the country are at drastically different stages of reopening due to the recent rollbacks, we wanted to take this respite to shine the spotlight on the comeback of a highly regarded friendship in advertising.

Paired with the gleefully energetic soundtrack of Queen’s “Don’t Stop Me Now,” this latest spot paid homage to Budweiser’s popular 2014 “Puppy Love” and 2015’s “Lost Dog” Super Bowl ads that starred the same inseparable duo, but in a less tear-jerking scenario this time around.

Since traditional production has taken a major hit, the use of repurposed footage has become commonplace, and “Reunited With Buds” fits the bill with shots from its 2014 Super Bowl predecessor “Puppy Love”:

But the added flashing neon “open” signs and repurposed fast-moving scenes of Horse and Puppy rushing to meet up with each other weren’t the only traits that differentiated this ad. The music played a major role in setting the tone with 16% of viewers soaking in the soundtrack from Queen’s hit song as one of best things about the ad, which also contributed to Solid emotional signal of 3.6 on Audio: 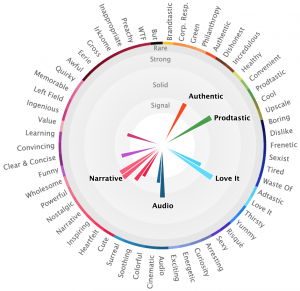 What stood out even more about this ad and its quick frames was its ability to display the product in a positive and exciting light that wasn’t left unnoticed, striking just the right balance of storytelling without detracting attention from the brand. Combined, these ad characteristics prompted Solid levels of Love It, Prodtastic, Narrative, Nostalgic, and Authentic.

Authenticity was evoked as a by-product of Budweiser conveying the message of reopening in a simple yet genuine and honest manner. Interestingly, Nostalgic signal fired due to the ad making viewers nostalgic about reopening as opposed to the horse/puppy being tropes from past ads. Viewer verbatims express the raw driving force behind the epicness of this creative:

“This ad was absolutely adorable! It completely got my attention. I loved the message about can’t wait to see you buddy….but when we do, we’ll do it safely.” Female 36-49

“I loved it. The horses looked good, the puppy was adorable, and Don’t Stop Me Now is the best Queen song. This is the gold standard of an ad that you don’t need new information on, just a quick reminder that they get you. The message was also on the nose due to the fact that it’s hard to see our friends in person during these times. Well played, Budweiser.” Male 21-35

“I loved this ad! I love the Clydesdale horses, especially after getting the opportunity to see and meet them a while back at a Budweiser brewery tour. I love dogs, too, so the combination of them got my attention right away. I also very much like the message of the ad” Female 50+

“Even though I’m not much of a drinker, if I do have an occasional beer it’s Budweiser. Aside from that, I always love the music+ storytelling + animals that the commercials include in their message. It’s iconic. Even better with the message of being socially responsible during Covid (without having to directly talk about the pandemic), and saying “we miss our buds”…. until then, stay safe.” Female 21-35

“Reunited With Buds” achieved an Ace Score of 734 among beer drinkers, ranking it as the second-highest scoring beer ad from this year – after Guinness’ first to market COVID-19 ad, “A St. Patrick’s Day Message From Guinness” (which ranked as the #1 beer ad of all time). Even among Gen Pop viewers, the ad scored a 652 Ace Score, significantly beating the recent beer advertising norm of 476.

It also topped the short but emotionally packed list of ads starring the unexpected Clydesdale/puppy duo. Trailing right on its tail was “Puppy Love” (2014) and “Lost Dog” (2015) with Ace Scores of 727 and 693, respectively. “Reunited With Buds” strength came from its ability to score significantly above norm among beer drinkers across all component measures:

Along with performing very well on these traditional metrics, “Reunited With Buds” produced a strong incentive among viewers, churning out a top-2 box purchase intent of 69%. Impressively, the level of purchase intent among beer drinkers achieved from this ad was on par with Guinness’ St. Patty’s day ad which scored as #1 from 2,000 beer ads dating back to 2009 – no small feat:

It’s important to note that the timing of an ad under current circumstances is imperative, even one that navigates the murky waters of the “new normal” as well as this spot does. With consumer sensitivities at an all-time high, taking into account the broader landscape when addressing reopening can be pivotal. And Budweiser’s spot did not fall short as seen from the ads’ Authentic emotional signal. The ambiguous yet responsible messaging stating “We can’t wait to see our buds. But when we do, let’s do it safely” could apply to anyone, anywhere, whether they’re still in quarantine or already reunited. For us, we’re not seeing our buds yet, so until then, cheers from home.