How do consumers feel about seeing face masks in ads? The subject of mask-wearing remains a hostile one in part due to politically-driven stances on the matter (although that could change). Brands are left conflicted on whether or not to incorporate face coverings – some fearing a move in one direction might alienate or turn off customers.

Brands do not always have the option of portraying characters wearing masks due to the virus itself. Repurposed footage from pre-quarantine days will most likely not illustrate social distancing, masks or other “new normal” safety measures. In other instances, certain categories, like cosmetics and toothpaste, make it difficult to advertise the product if faces are covered. Will excluding masks offend consumers? Or will it go unnoticed?

By measuring the frequency of the mention of “masks” in viewer verbatim comments about ads, we were able to determine if masks have an impact on effectiveness, and ultimately found:

Face Masks as the Focal Point

COVID-19 ads that saw the most mentions of “masks” across viewer verbatims were those that purposefully emphasized it. Among the five recent ads with the most mentions of “mask(s)” in verbatim comments, two promoted masks as a product, two as a part of a company’s policy and one used it as a means to sell its own product. In general, viewer sentiments towards face coverings in these ads were overwhelmingly positive with some neutral/mixed statements as well.

VistaPrint’s “This is not a mask” serves as a good example of how revolving the message around masks (even when the product is a mask) can work out well. Rather than appearing to sell its own products, Vistaprint advocated the benefit of face coverings giving “This is not a mask” more of a PSA feel. This contributed to its Empowerment score of 1.4 – achieved by only 7.76% of all ads – which was largely driven by viewers ages 50+ and females 21-35. 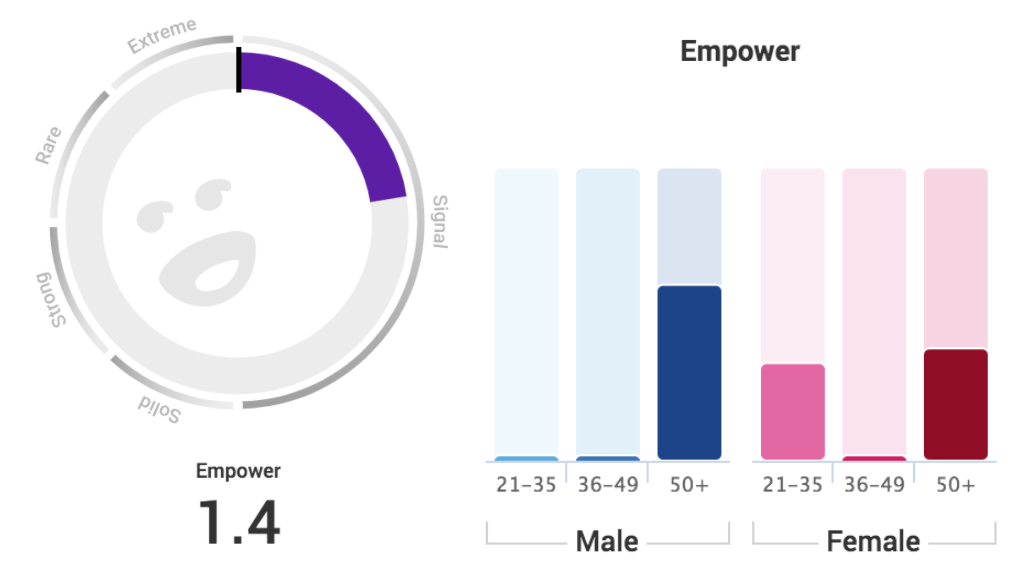 On the other hand, Menard’s “Stay Safe” resulted in an Exploit score of 1.5 (with no Empower signal) due to its focus remaining solely on masks as a product while also lacking the purposeful drive found in Vistaprint’s spot. Likely due to the direct selling of what seemed like a generic product, “Stay Safe” resulted in lower component scores than VistaPrint’s spot on all measures. Not surprisingly, Relevance was the only component score that spurred above-norm levels: 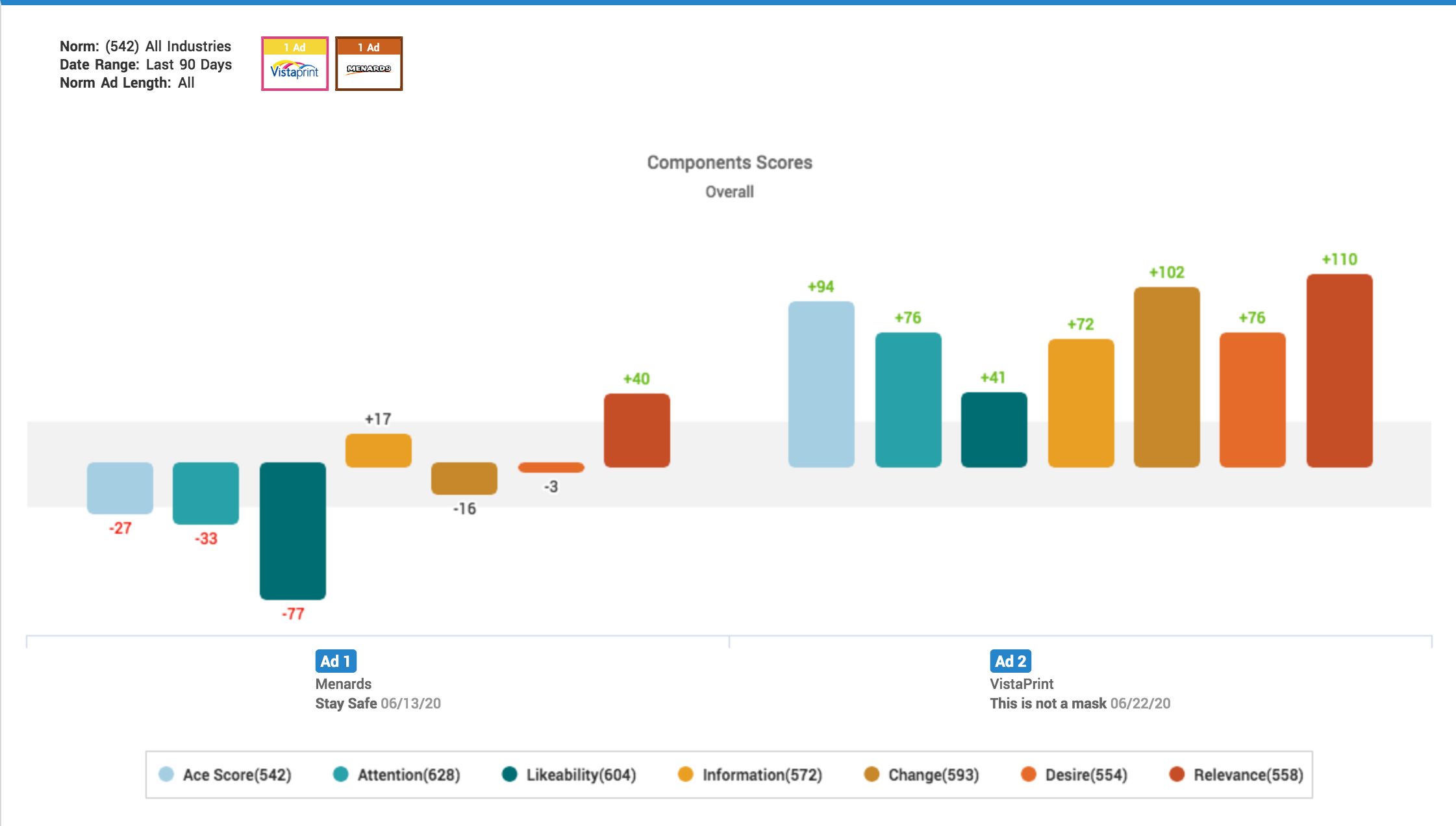 Uber made a bold statement with its “No mask. No ride.” policy mentioned in text near the end of its ad resulting in a significant amount of viewers showing support for the brand’s initiatives being communicated so clearly. In fact, 66% percent of viewers that brought up masks in regards to “Safe Delivery” felt positively towards Uber’s stance.

On the flip side, viewers that may have negative sentiments towards the usage of masks in general seemed to reach their tipping point with this direct stance. It is also noteworthy that some of the viewers with negative sentiments towards this ad weren’t specifically agitated by the masks themselves, but instead, their preconceived notions about the brand and its past business practices.

Though this ad resulted in an Exploit score of 1.5 and an Empower score of 1.1, these divergent scores are not altogether very risky and the spot achieved above-norm scores on the majority of Components measured: 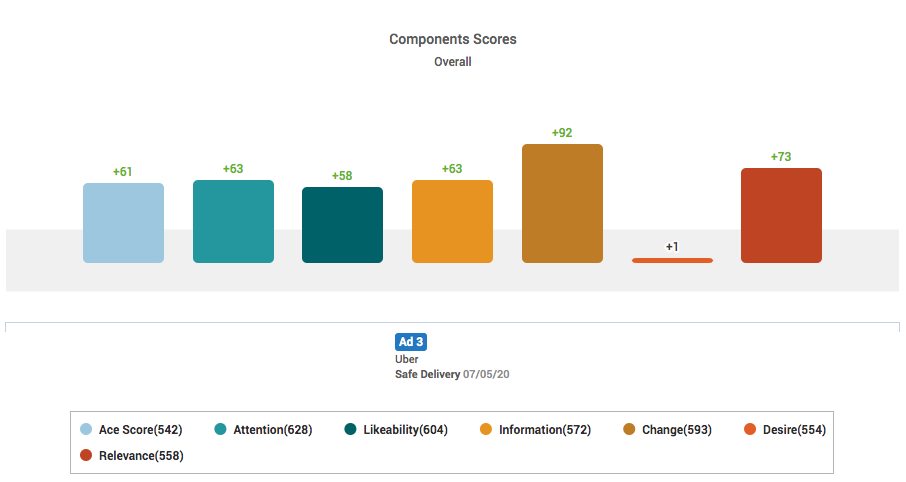 Verbatim comments reveal that Ice Breakers’ approach concerned viewers, with some mentioning that the brand was taking advantage of the virus situation to promote its product in an all-too direct fashion. This use-case for its mints was seen as distasteful by some – resulting in an Exploit score of 1.9, placing it just on the edge of the Safe Zone: 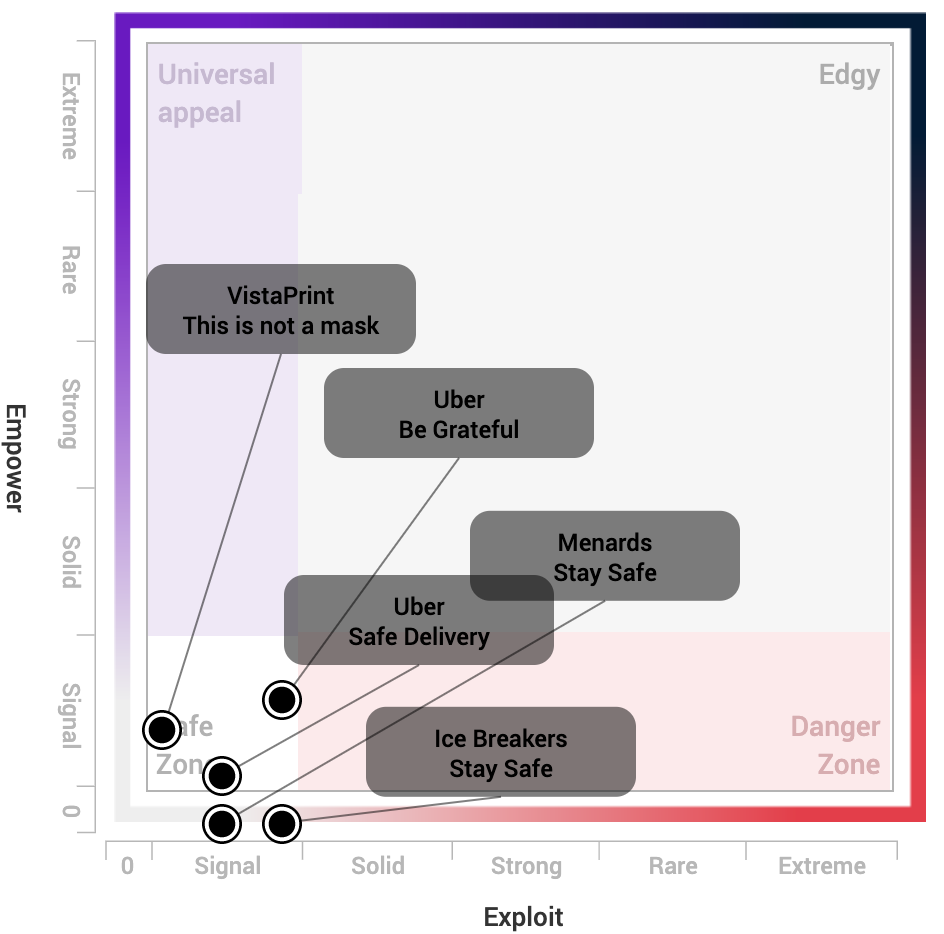 What about more subtle mask inclusions?

When it comes to incorporating masks into ads, most brands are not as forward as Menards, Vistaprint and Uber. Most often, these ads simply portray characters covering their mouths without calling attention to it. In some instances, it is briefly mentioned as a policy or in regards to helping those on the front lines (ie. supplying masks).

The more subtle the inclusion, the less viewers made note of “masks” in their verbatim comments. In fact, fewer than 5% of viewers mentioned it in their comments for 26 out of the 37 mask ads from June that we analyzed.

Interestingly, as a group the more subtle mask ads stirred up more polarizing sentiments among viewers that commented on the matter. Perhaps, the more forward ads benefitted from messaging that clearly made the case for masks, whereas subtle ads left viewers to draw their own conclusions. 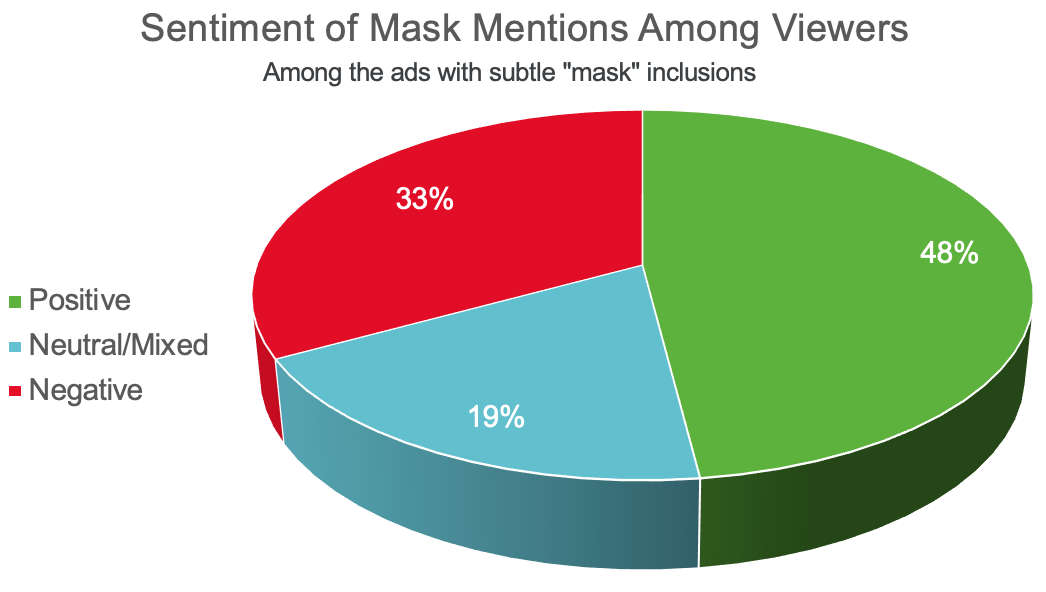 Note: these mentions make up <2% of the verbatims collected for all the subtle mask ads combined

Among negative mentions, a majority of viewers found the masks off-putting because it was either a depressing reminder of the times or they were sick of seeing it in ads:

“I don’t like the images of social distancing or people wearing masks. I think it’s unnecessary, and it just reminds me of how messed up things are.” Female 50+

“Every single company out there right now is talking about social distancing and masks and hand sanitizer… At this point, it’s just annoying.” Female 21-35

Only 19% of the negative mentions downplayed the effectiveness of masks, which seems to echo sentiments coming from conflicting political and media channels. However, these comments comprise a relatively small portion of all the responses we captured for each ad. Many lack specific references to the advertiser, suggesting that most viewers are not linking brands to a particular affiliation based on the use of masks in their ads.

Despite this group of naysayers, most of the subtle ads achieved Ace Scores significantly above the recent all-industry norms of 543 indicating masks did not negatively impact effectiveness. However, masks are also not the sole reason these ads performed so well, with other elements carrying more weight when it came to effectiveness.

What about ads without face masks?

The exclusion of masks in ads did not evoke strong enough feelings for most viewers to even comment on the matter in their open-ended verbatims. In fact, 73% of the “no mask” ads we analyzed had only one viewer mention the lack thereof in their comment. The other 27% saw either two or three mentions. With 395 verbatim comments per ad on average, that is <1% of viewers feeling so strongly in regards to the exclusion of masks that they called it out.

Among the set of “no mask” ads from June, 24% of the viewers that commented on it felt positively towards the exclusion, like the following examples:

“I enjoyed the way that the ad was presented, and thank you for not putting masks on everyone!” Female 50+

Meanwhile, the remaining majority thought it was tone-deaf for brands to portray people without masks:

“The images we see in the media play a very important role in shaping our behavior, and advertisers have a lot of power and responsibility when it comes to conveying socially responsible messages. I didn’t see one person on the bus in this ad who was wearing a mask, and that is unacceptable. This ad makes me think very negatively of Boost Mobile.” Female 36-49

“NOT ONE person in your ad was wearing a mask, so I don’t care how American you Think you are, put masks on them.” Female 50+

However, since less than 1% of viewers called upon the lack of masks in each ad, other creative elements had greater impact on effectiveness, with scores ranging significantly above and below norm for this set of ads.

Brands are given a break when it comes to including or excluding face masks in ads. Overall, a vast majority of consumers are not sensitive towards masks in ads – or the lack thereof – unless it is the central focus. At which point, the general consensus views it favorably in part due to storytelling that builds a brand’s stance on the matter. However, masks as a product being sold or using it to sell products can heighten a sense of Exploitation among viewers that perceive it as cashing in on a tragic event. In order to maximize success, brands should handle masks as an authentic and necessary part of the story.

Lighthearted Sports-Themed Ads Knock it Out of the Park