Lighthearted Sports-Themed Ads Knock it Out of the Park

The return of sports to TV screens is a glimmer of hope for many – even if the stands are filled with virtual fans or completely empty. A lot of excitement has built up around baseball, basketball and hockey hitting the airwaves all within two weeks, and if things go smoothly, maybe football in September.

While sports fans are excited to watch their favorite teams take to the field, brands are also eager to connect with consumers over something more lighthearted than dismal current affairs. In fact, advertisers are so keen on the matter that Fox Sports sold 90% of its MLB ad inventory ahead of the season’s start on July 23rd and Turner Sports already sold out of the NBA’s regular season inventory.

COVID isn’t the only thing on people’s minds with sports returning. Black Lives Matter is ever-present as players across leagues kneel during anthems and teams adorn stadiums with tributes to the movement. The NBA is the only league so far that cemented its stance on the matter with a BLM-themed spot (its highest scoring ad to date).

As the latest leagues to make a comeback, the MLB and NBA hyped up their seasons in recent ads with cinematic visuals that are sure to give any and all fans goosebumps. The table below covers how those ads performed across a number of component measures relative to each brand’s fan norms, which are based on respondents that self report that they’re “a little bit,” “somewhat” or “very interested” in the respective league. In general, fans have a strong Desire for the return of these sports, with all the ads scoring above or around norm on this component:

Actress Issa Rae helped bring excitement from the court to the viewer’s couch in the National Basketball Association’s ad announcing its restart after a 141-day hiatus. Green-screen technology put Issa right in the middle of all the action, creating captivating visuals that drove above norm Attention and Likeability among NBA fans. Compared to their relative norms, female fans resonated best with the ad, with male viewers trailing at a safe distance: 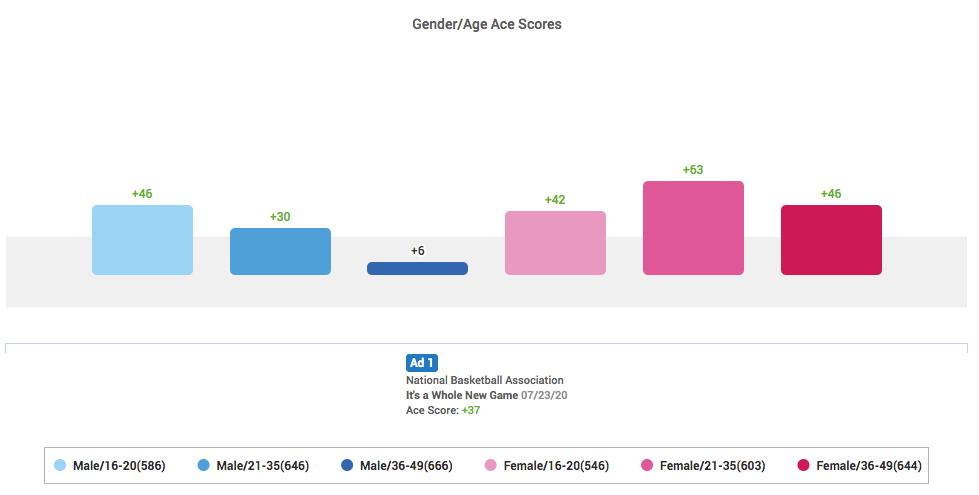 “It’s a Whole New Game” channeled NBA fans’ excitement, with that scoring as the top emotion. Also evident in verbatim comments was a sense of Authenticity from Issa’s narration accompanied by feelings of Nostalgia from past clips wrapped up in a love (Love It) for the game supported viewers’ excitement about its return: 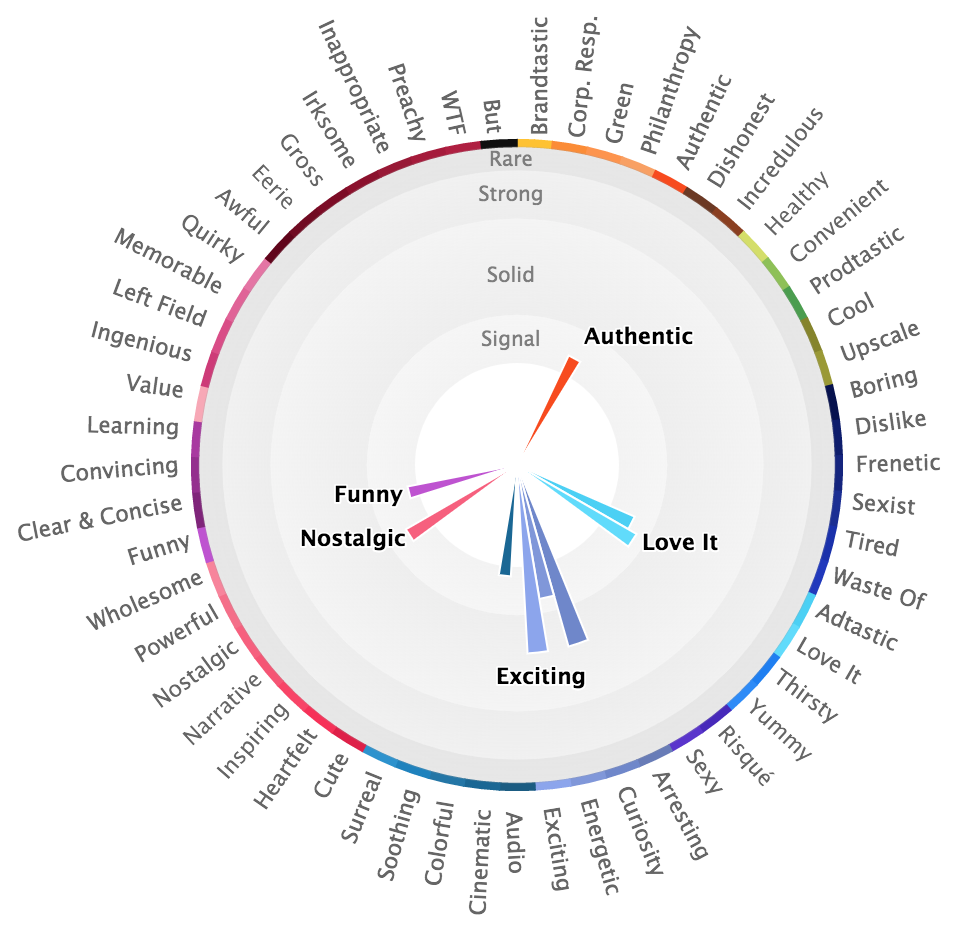 “I am very excited for the return of the NBA. I know the cavs are not playing but it was nice to see Kevin Love in the ad. I also appreciated having a girl talk about the NBA and hosting the commercial.” Female 16-20

“I loved it. I’m a very big basketball fan and I’ve been waiting for things to get back started even if it isn’t the same anymore at the moment it’s still my favorite sport” Male 36-49

“I watch NBA games and have been wondering when they will return, so I liked that message of the ad. I think Issa Rae made this ad stand out from other sports ads.” Female 16-20

“I like the ad and I like the nba. I can not wait to start watching it. They want to show us its coming back” Male 21-35

In its Opening Day spot, the MLB tapped into the magic of the sport – from preparing the field to playing the game. The Visual Scenes, which focused on the sport itself, were more favorable among fans than in the league’s other comeback ads, “Stay Ready” and “Players Game.” Without a voice-over to direct the narrative, the scenes alone drove excitement with fans loving the return of baseball (Love It). On top of that, viewer comments about longing for its return set off Nostalgic signal: 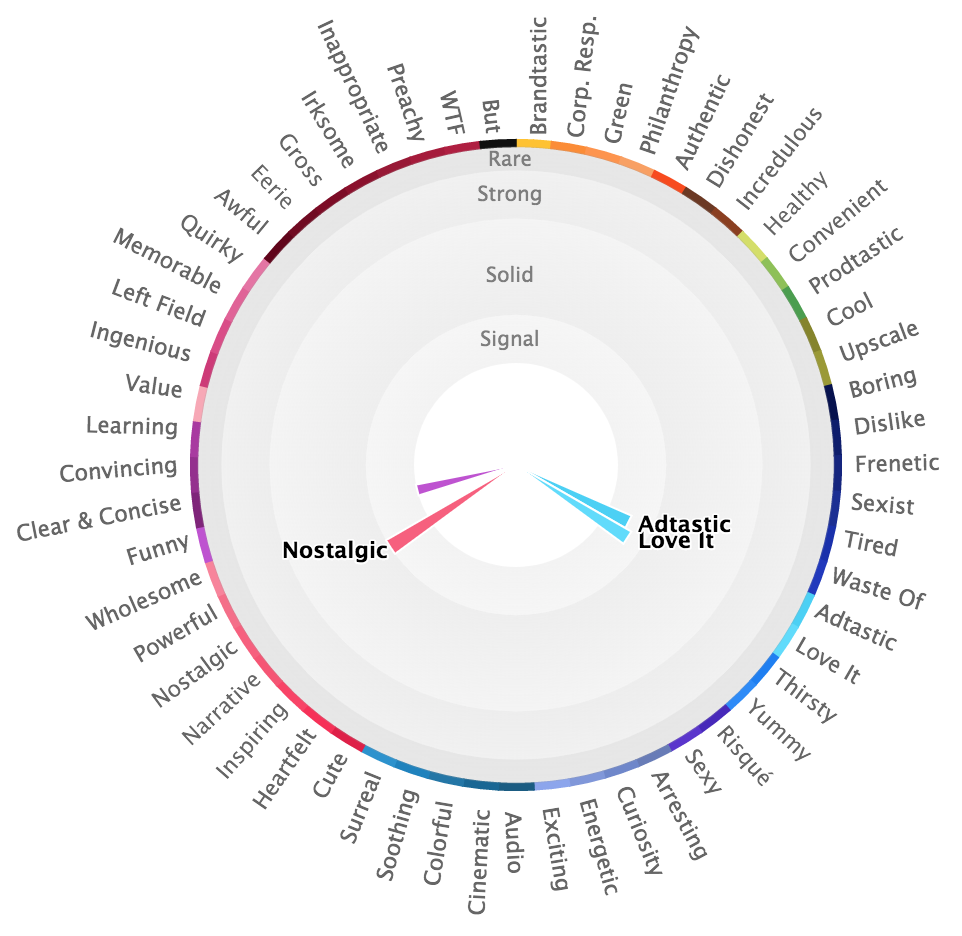 “I thought that this advertisement really captured the feel and action seen in baseball. It has great visuals and really made me miss baseball somewhat.” Male 16-20

Hockey is hot on the NBA’s heels as the NHL picks up where it left off tomorrow, August 1st. We’re anticipating the league and its sponsors, like Honda, Dunkin’ and Little Caesars, to whip up creatives that capture the excitement behind its return.

Brands Get In On the Action

It’s not just the leagues themselves that are ready to play ball. Brands are joining in on the pent-up anticipation with ads that acknowledge changes in some capacity. Many sympathized with fans that cannot be in the stands, making visuals of empty stadiums reminiscent of ads featuring empty streets.

The table below covers how recent sports-themed ads performed across a number of component measures relative to each brand’s competitive category norms:

Doubling down on its long held gender equality stance, Secret focuses on female soccer players in “Equal Rights” and champions for equal pay and representation in sports media coverage. Not the lightest approach among the sports-themed ads, but it paid off with one of the highest scores on Empower (positive Cultural Perception), particularly among females: 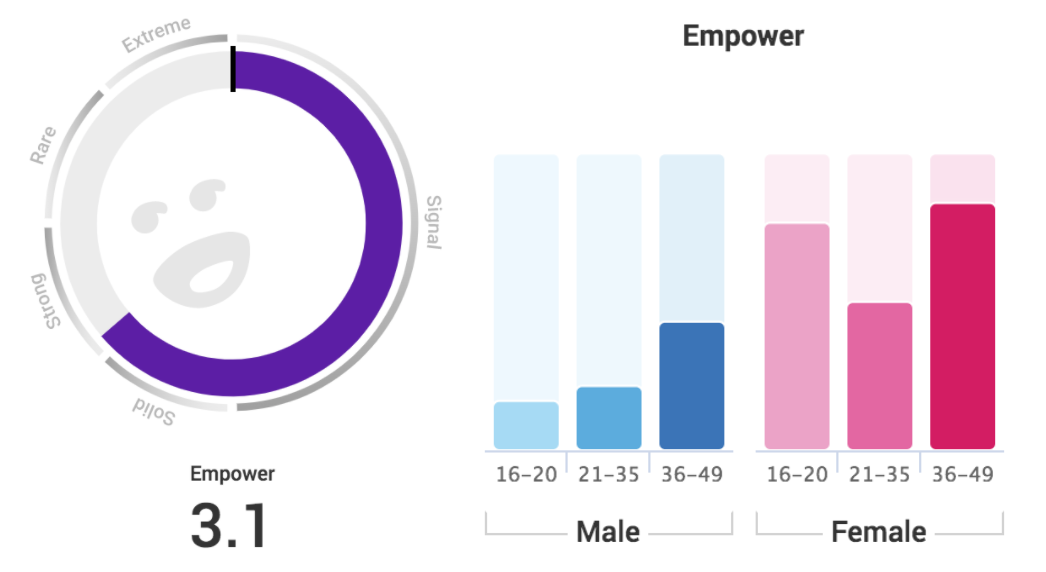 As with any strong stance on a polarizing issue, it also set off similar levels of Exploit signal. However, above-norm scores across traditional metrics and positive purchase intent indicate the negative Cultural Perception is not a significant cause for concern in terms of backlash.

“Truly Priceless” starts out just like MasterCard’s COVID-19 ad from May, “Be Protected,” but differs with an MLB-themed ending that touts its league sponsorship. From the get-go, the adorable dogs reeled viewers in, while the emphasis on The Yankees did not turn off too many White Sox fans. Compared to its counterpart from May, “Truly Priceless” performed above-norm amongst the same gender/age groups. However, the sports theme of “Truly Priceless” scored significantly better (+16%) among males ages 36-49, indicating its a stronger creative with this demographic: 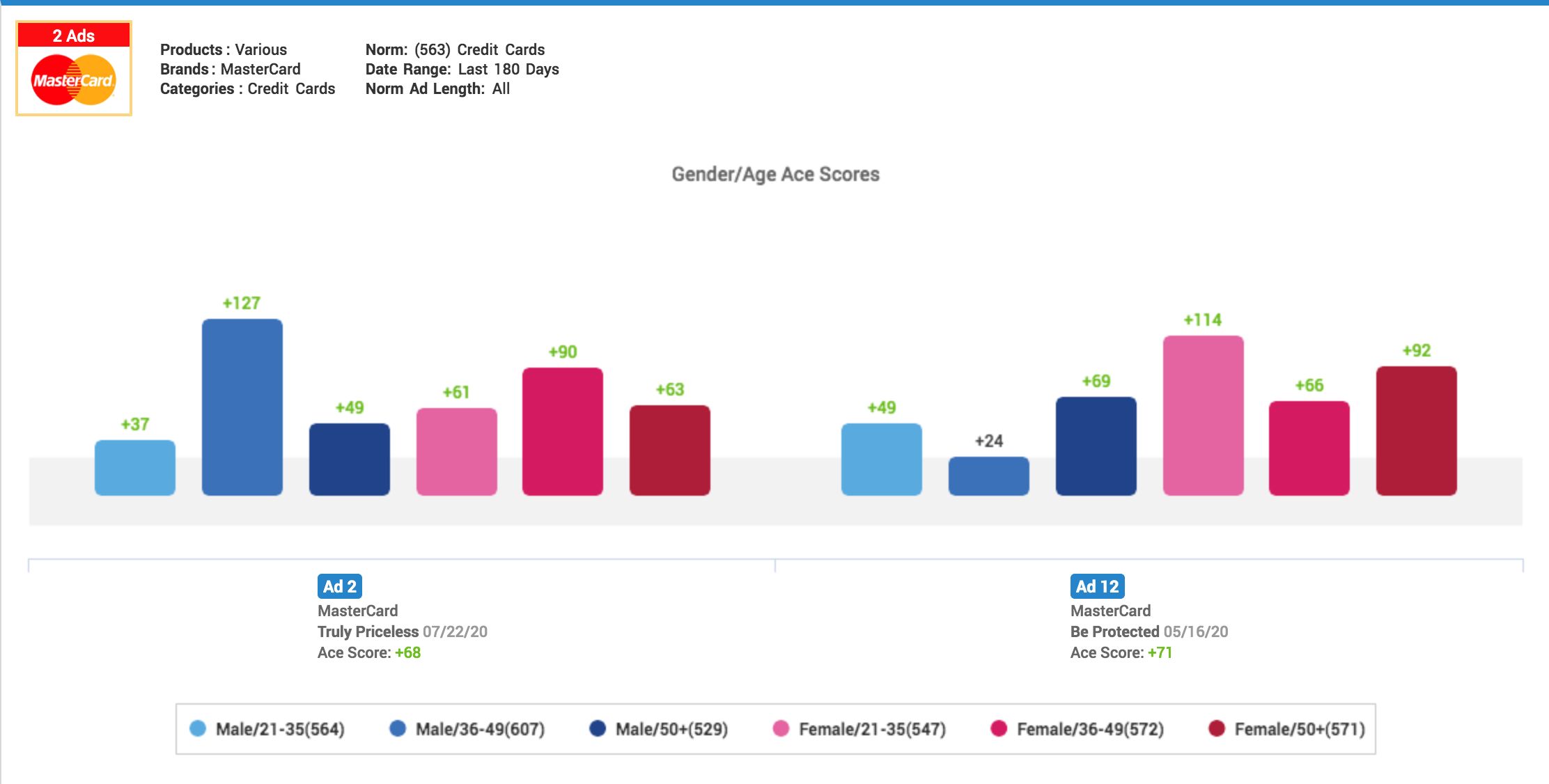 Using tongue-in-cheek humor, Gatorade commiserates with professional athletes who are itching to play anything at this point. The recognizable Characters, chosen as the Single Best Thing about the ad by 21% of viewers, entertained and drove above-average levels of Attention (+8%) and Likeability (+8%). “Time to Play” performed significantly better among males, where positive purchase intent was 14% greater than what female viewers reported.

In its celebration of sports returning, Bud Light puts a humorous, COVID-19 fueled twist on baseball’s official anthem, “Take Me Out to the Ball Game.” Among gen pop viewers, beer ads typically score lower than the all-industry average due to non-drinkers’ lack of interest. However, the sports-themed content gave “Take Me Out to the Ball Game” a leg up with component scores that beat beer advertising norms across every component measure. The ad performed particularly well on Relevance (+28%), which speaks to the potential power of sports tie-ins at this time.

Buffalo Wild Wings swung and missed with its MLB and NBA-themed spot. The strongest emotion viewers felt in regards to “We Need Sports. Sports Need Us.” was a sense of internal conflict (But) where they liked some aspects and not others. The ad’s length was the source of conflict for 7% of viewers that thought the initial part of the ad was long-winded and/or that the brand needed an earlier introduction. 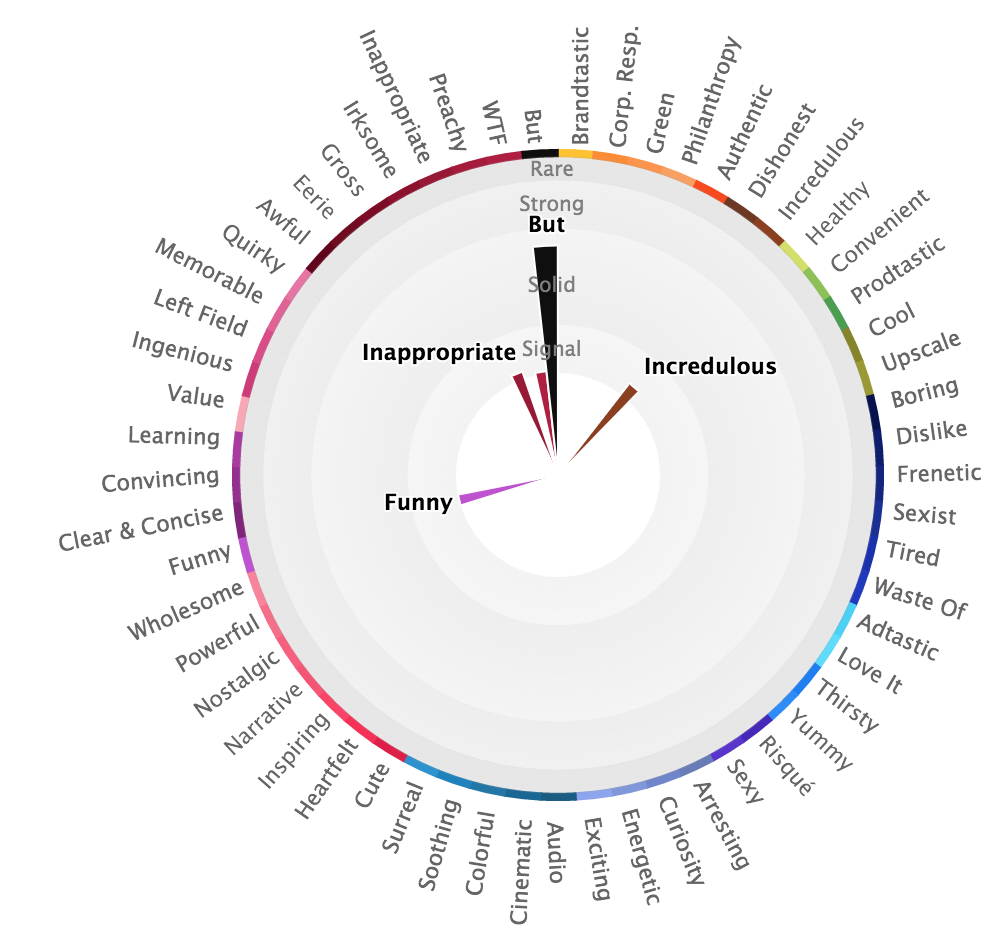 Others took issue with the ad’s message, which ultimately promoted dining-in at Buffalo Wild Wings’ restaurants as a way to recreate the in-game experience. Some simply perceived this move as Inappropriate. Meanwhile, others expressed disbelief (Incredulous) that a brand would encourage dining-in after pointing out how it’s unsafe to gather in crowds at professional sports stadiums.

For many, the return of sports is a light at the end of the tunnel – a hopeful sign that things will get back to “normal” sooner than later. Sports might provide a much needed escape, but brands can’t completely dissociate from our current reality. Consumers gravitate towards positivity so ads that can lean into the lighthearted side of sports while still alluding to the “new norm” in some capacity will fare well.