The first three months of 2018 brought with it outstanding creative from events like the Super Bowl, Oscars, and the Winter Olympics, and consequently raised the advertising bar for the rest of the year. During these events, advertisers had to go above and beyond in order to grab viewers’ Attention away from other ads and the events themselves. While some speculated that less risk taking would lead to a boring Ad Bowl, US viewers were still wowed. As a result, seven ads from Super Bowl 52 made it in the Top Breakthrough list for Q1 – a significant increase compared to 2017’s Q1. Inspirational creative from PyeongChang 2018 and two ads with eye-catching, lovable pets are also among the top ten. It goes to show, viewers remain in favor of ads that make an emotional connection, entertain with visuals or celebrities, and, when all else fails, feature animals.

Below are this year’s top Q1 ads ranked by Breakthrough performance, which combines the Attention and Likeability component scores. These are the best of the best, achieving Breakthrough levels recorded by less than 1% of all ads.

Topping several lists this past quarter, Toyota’s “Good Odds” holds up as a powerfully moving ad that combines music and visuals to deliver its inspiring message. Without stating product attributes, statistics, or any facts for that matter, viewers found the creative extraordinarily informative, making it one of the strongest aspects about the spot (as shown in the ad personality below). 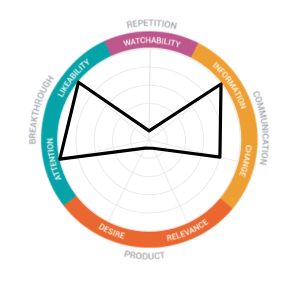 Aside from entertaining, Subaru’s “Love and Pets” was effective in relating to viewers. The compilation of cute clips, named the top Single Best Thing, made viewers want to watch again and share with their social circles. After all, what’s more universally attention-grabbing than pairing adorable animals and children together. Viewers’ verbatim comments concur:

“Anything that mixes puppies or other young pets — or any kind of pet, young or old — with little kids grabs your attention. No matter what the ad nothing brings a smile like a kid and a puppy. Subaru did well by tying the message of animals and people with unconditional love. It was a great way of showing a human side to the automotive industry and a brand of vehicle that has been dealing with issues. Great commercial, but a greater message.” – Male, 50+

“Children and pets usually are a magnet for attention, and the product was not revealed until the end – a good marketing ploy.” – Female, 50+

“Totally kept my attention very cute kids and animals. I will remember it was a Subaru ad just because it was so cute” – Female, 36-49

Beyond the loveable puppy growing into a strong dog, Eukanuba pulled heartstrings to further connect its message with consumers. Viewers were able to relate the food that fuels the animal to the extraordinary things it was able to accomplish as a service dog. Unfortunately, unaided brand recall was only 47%, suggesting viewers were too distracted by the puppy.

Jeep took viewers on an exhilarating test drive with Jeff Goldblum through Jurassic Park during Super Bowl LII. Our data shows movie tie-in ads are effective in generating viewer Attention, but it doesn’t guarantee success on other metrics, like brand recall. However, after tightly weaving its product into the storyline, Jeep distinguished its ad from a trailer and generated brand awareness among 92% of viewers.

Comcast’s “Second Chance” stood out to viewers as one of the most inspirational ads from Pyeongchang 2018. While emotions were high throughout the 60-second spot, it also packed in a lot of new Information about Rico Roman, the featured athlete. His story steadily built engagement and had viewers hooked until the end.

Congrats to the brands that made it on our list of the Top 10 Breakthrough Ads of Q1!