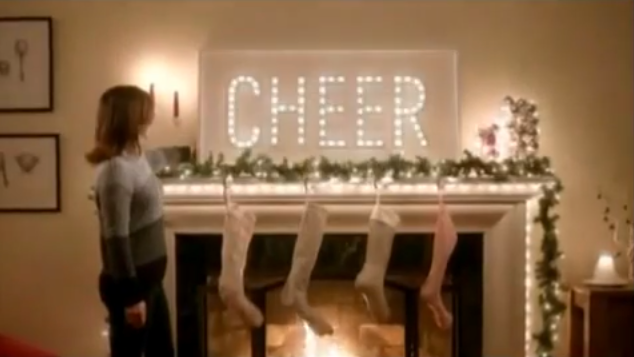 While common themes of philanthropy and seasonal stories certainly fill the Top 15 Holiday Ads list, an element of humor also brought a little chuckle to these extraordinary spots. In fact, nearly one-third of these 15 ads incorporate a comical quip, rather successfully, into their high-scoring holiday ad. One brand that successfully used humor consistently throughout the celebratory season was KFC, which earned the highest average Ace Score among holiday advertisers to air four or more unique pieces of seasonal creative (Average Ace Score: 608). Coca-Cola was next in line with its holiday ad campaign, earning an average Ace Score of 594, also making an appearance on our top ads list.

Each of the top 15 ads below accomplished its holiday cheer by earning an exceptional Ace Score, a high percentage above its category’s 2014 average Ace Score.

Nintendo’s ad “Dad Loses” held on to its top spot since our pre-Thanksgiving top holiday ads list. The family-focused ad hit home with consumers with 27% of optional consumer responses mentioning “family” and another 10% who used the word “together.” 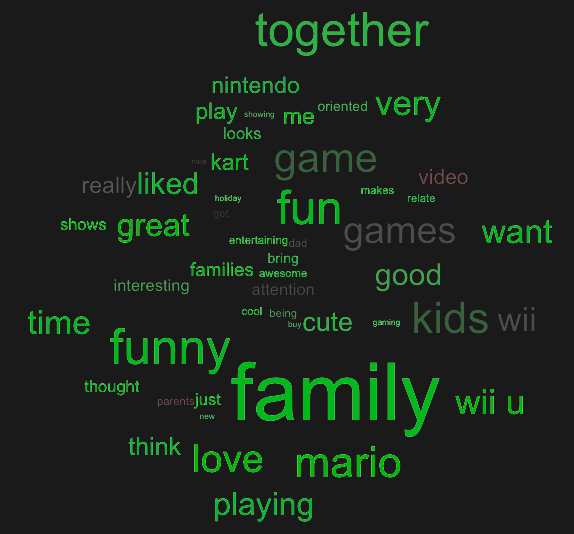 With Video Game ads usually touting sports and shooter-style interactivity, Nintendo’s ad was a fresh take with a family-friendly theme, earning it an Ace Score of 630, 23.2% above its 2014 category norm.

“Paid To Shop”
Scored 21.9% higher than the Websites category norm

Ebates’ ad “Paid To Shop” also retained its number two spot on the top holiday ads list from before the turkey feast. The ad won for its ability to impart Information and Desire with a hard-to-resist deal, earning an Information score 17% above the 90-day Websites norm and a Desire score an astounding 31% above the Websites 90-day norm.

In fact, 20% of consumers agreed that the best thing about the ad was the deal mentioned while another 20% thought it was the message (which is basically synonymous with the enticing deal). 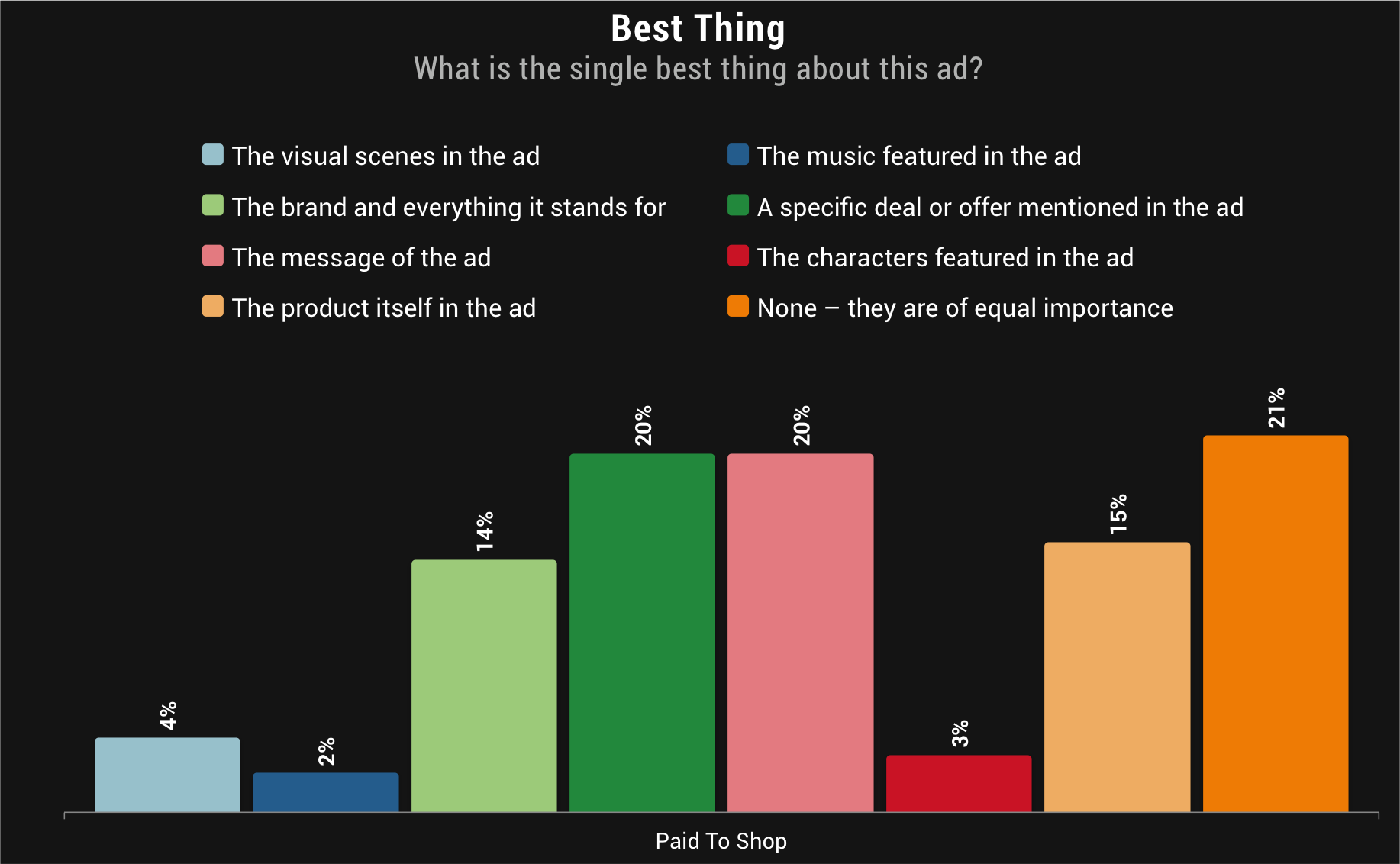 Ebates was able to find an angle that got consumers interested and excited about what they were advertising.

Mazda’s touching holiday ad, “Braeden’s Story,” earned the highest Ace Score of any holiday ad to debut, 21.2% above the Corporate Branding norm. Forty-six percent of consumers found the ad’s message to be the best part of the 1:30-long spot. 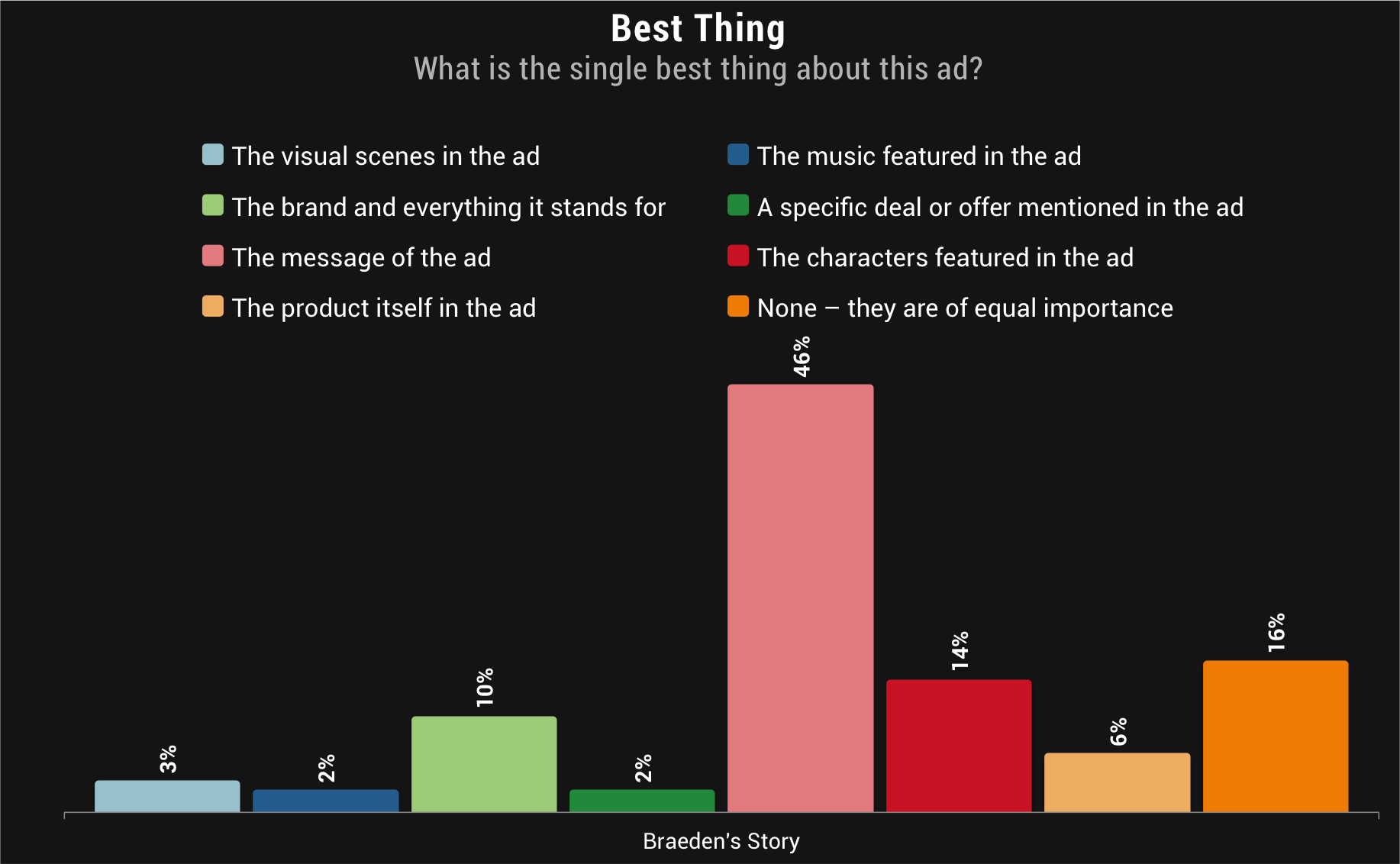 Likewise, Braeden also took home a good chunk of consumers’ hearts with 14% saying he was the best thing about the ad. Consumers were overwhelmed with this philanthropic spot using words like “heartwarming” (4%), “great” (13%), and “inspiring” (5%).

The product was the star of Amazon Fire TV’s winning spot, “Rom-Coms,” with 35% of consumers saying the product was the best thing about the ad. Many consumers found the ad very informative, awarding it an Information score of 671, 18% above the Television Services 90-day norm.

While Curt Menefee and Jimmy Johnson were the celebrities of the spot, the real star of the show was Amazon’s innovate Fire TV stick.

Coming in at number five, Kohl’s and Walmart both tie, with Ace Scores of 640. Both retailers also earned the crown of the highest scoring holiday Retail ad.

This visually stunning spot was not lost on consumers with 31% of survey respondents saying the ad’s visuals were the best thing about it. Meanwhile, 22% said the ad’s message was the best thing and 14% of consumers said it was the characters. This spot also landed highest on the Emotional Sentiment index (along with three other holiday ads) with a score of  81 (on an index of 100).

Walmart’s “Surprise” is the second philanthropic-themed ad on the list. Its heartwarming story and message earned the ad an especially high Likeability score, 15% above the 90-day Retail norm.

Additionally, 37% of consumers agreed that the best thing about this ad was its message of giving back during this holiday season.

Subway’s deal in “Cool” earned lots of points with consumers, offering two favorite sandwiches for $2 each. Twenty-seven of consumers said the deal was the best part of the ad while 15% also mentioned the deal when leaving optional feedback for the advertiser. 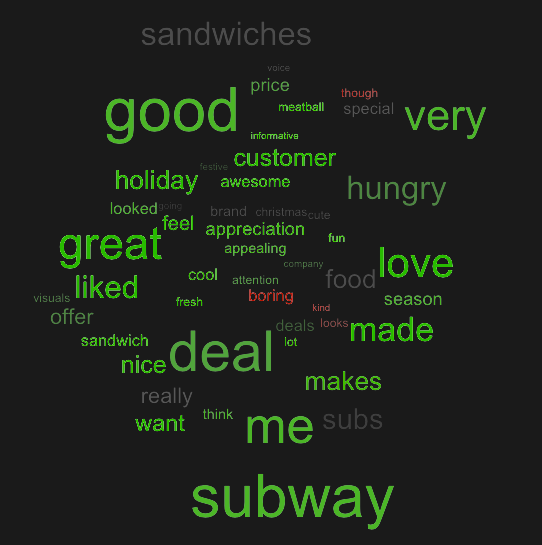 The combination of the tasty visuals and an irresistible deal lead to a Desire score of 718, 16% above the QSR 90-day norm.

“Spread More Of This”
Scored 14.9% higher than the Retail category norm

Home Depot and PetSmart tie for the third spot on the list, both with Ace Scores of 632.

Home Depot aired several holiday spots this year. Its highest scoring ad, “Spread More Of This,” earned the home improvement brand an Ace Score of 632, which is 16% above the 90-day Retail norm. While home improvement ads are typically associated with high scores from men, this winning ad earned its high scores from women, who scored the ad 7% higher overall than the scores that men gave the ad. 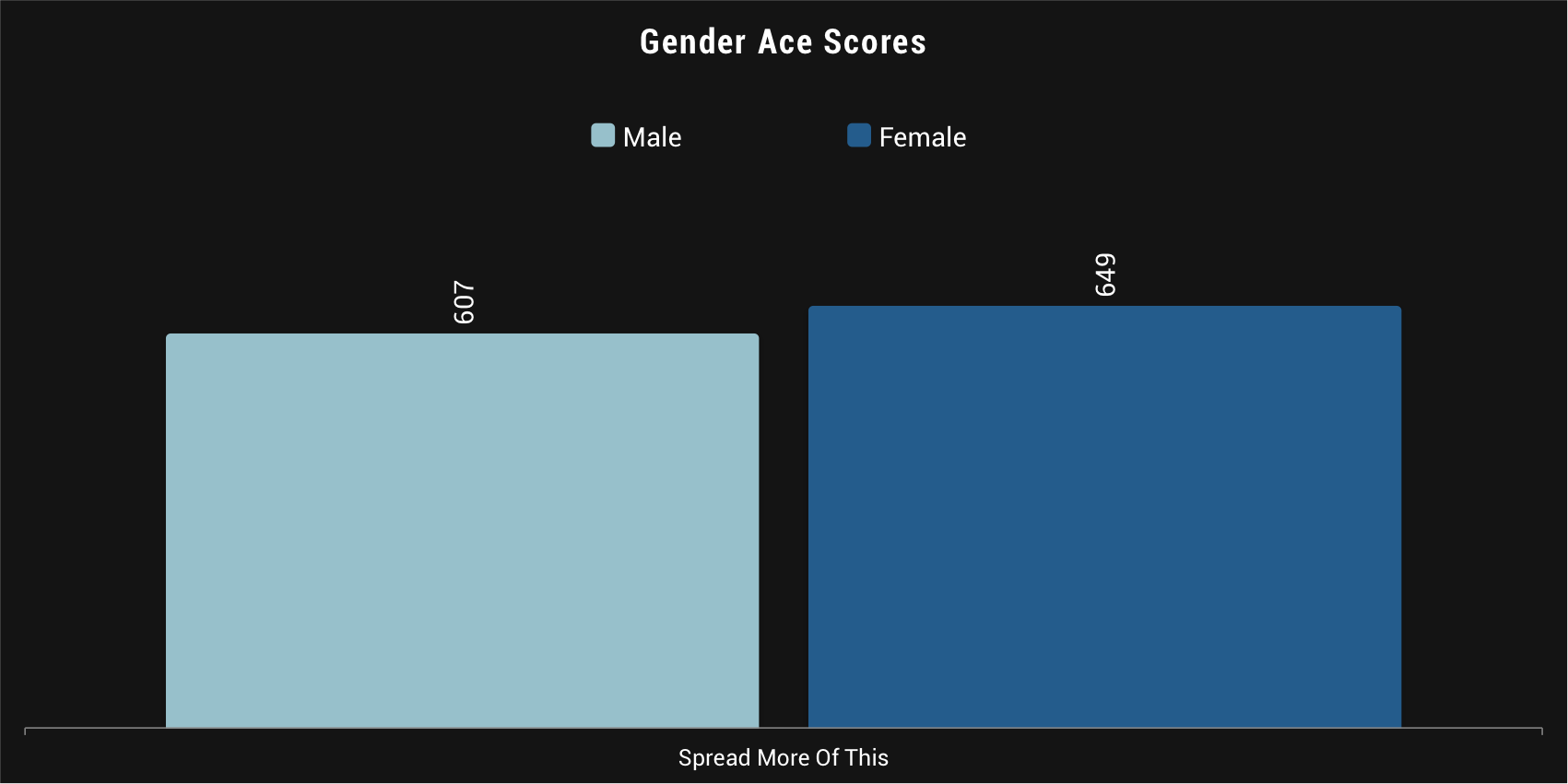 “Thanks To Your Pets”
Scored 14.9% higher than the Retail category norm

PetSmart’s ad, reminding us to thank our pets for all their year-round cuddles, “Thanks To Your Pets” earned extremely high scores for Attention and Likeability, 14% and 21% above the Retail 90-day norm, respectively. While PetSmart’s Emotional Sentiment score is usually quite high, this ad brought in an Emotional Sentiment score of 71, 16% above the brand’s 12-month norm.

“The Grinch And Santa”
Scored 14.5% higher than the Other Insurance category norm

Nationwide’s “The Grinch and Santa (JanaClaus)” was able to achieve high scores in the Breakthrough components of Attention and Likeability, 14% and 16% above the 90-day Other Insurance norm, respectively.

This win is quite the accomplishment for Nationwide, especially considering this is the only holiday ad to debut from an Insurance brand in the last couple years.

“Make Someone Happy”
Scored 14.4% higher than the Soda category norm

Coca-Cola’s co-branded ad with Walmart, “Make Someone Happy,” earned an Ace Score of 629, 14.4% above the Soda category 2014 average. Thirty-eight percent of consumers agreed that the ad’s message was the best thing about the spot. The message of the ad elicited many emotional reactions with 8% of consumers saying the ad was “heartwarming.” As we would expect from a co-branded ad, consumers mentioned both Walmart (12%) and Coca-Cola (Coke) (9%). 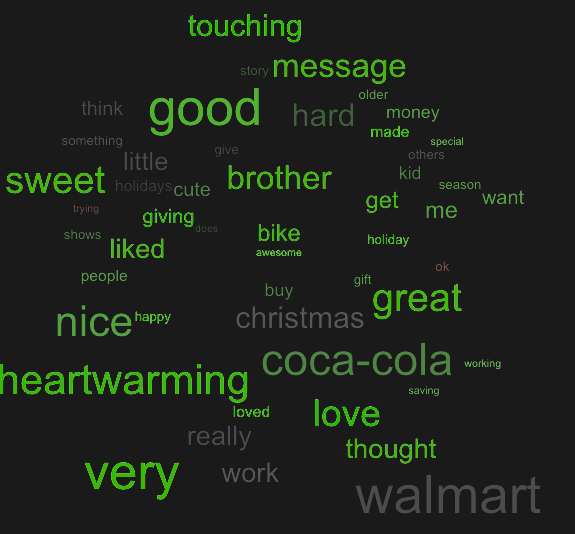 Walmart debuted over 30 new holiday ads this year, with many of them featuring celebrities Melissa Joan Heart and Anthony Anderson. Walmart’s ad “Unbeatable Prices” delivered for its variety of product introductions, consumer relevance and light humor. Its Desire score achieved a score of 655, which is 18% higher than the Retail 90-day norm.

“Light Up”
Scored 13.6% higher than the Retail category norm

Best Buy’s co-branded spot with Intel achieved a high Desire score of 642, which is 17% above the 90-day Retail norm. Consumers liked the visuals of the ad with 30% of survey respondents indicating it was the best thing about the spot. 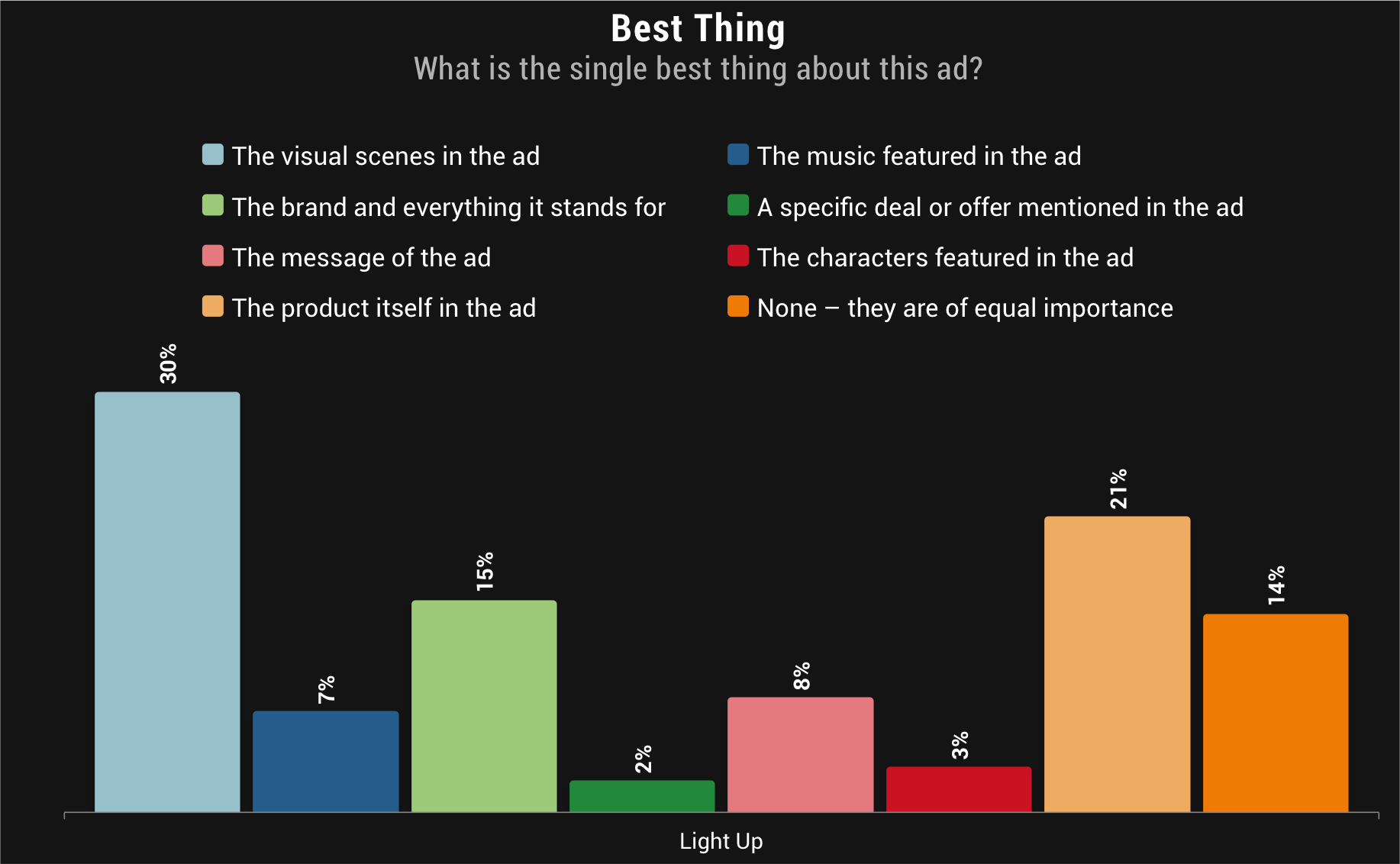 Another 21% of consumers agreed that it was actually the ad’s featured products that were the best thing about the ad.

Game Stops holiday ad, “Santa’s Wish,” earned its high scores for being both effective and humorous, a hard-to-accomplish combination. Of the 312 optional comments left for Game Stop’s ad, 24% of consumers mentioned that they found “Santa’s Wish” “funny.” 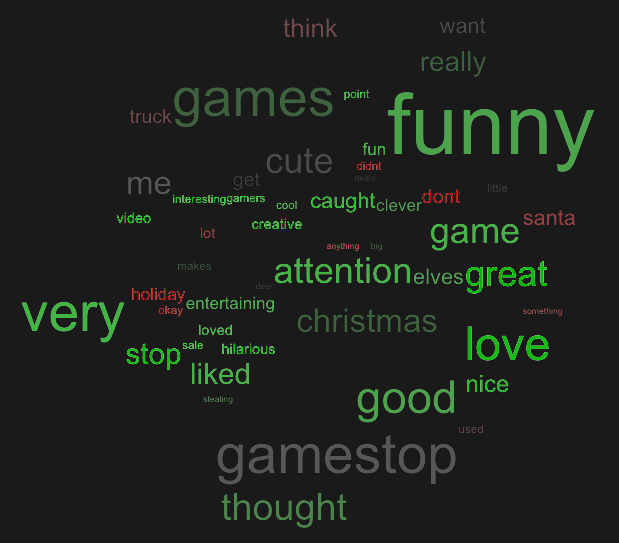 The ad’s creative characters and great visuals stood out. Twenty-three percent of consumers said the visuals were the best thing about the ad while 21% indicated that it was the ad’s characters.

With another funny ad rounding out the end of our list, Lowe’s ad, “Make Snowman,” is also the only 0:15 to make the top 15 list, an accomplishment in itself. Many consumers found this ad humorous with 17% of the 406 optional comments mentioning how “funny” the ad was. 14% of consumers also found the ad “cute.” 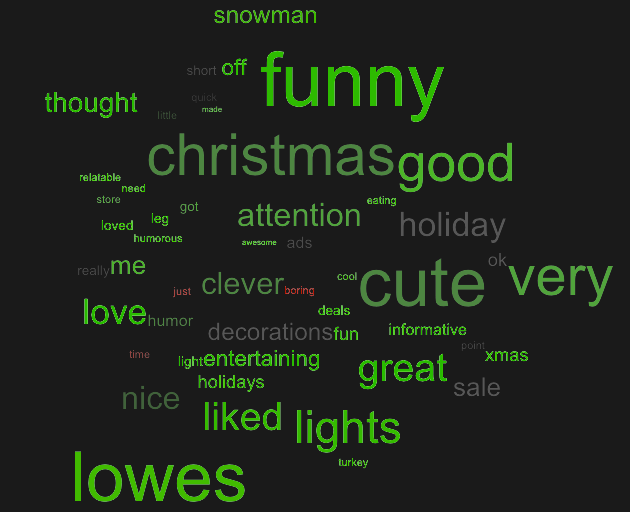 Additionally, although the ad is not very long, 14% of consumers still used the brand’s name, “Lowe’s,” in their optional comment—an accomplishment in successful branding during a short timeframe.