The Emmy award show is TV’s biggest night where programs and series from various studios and streaming companies receive nominations (and hopefully trophies!) for their cream of the crop work. The advertising world also gets its own slice of the pie, with five ads nominated for 2020’s Outstanding Commercial award. Amazon, Apple, P&G, Jeep, and Sandy Hook Promise are all competing for the honor.

As our data-driven study of Cannes Lion winners revealed, the ads that industry insiders deem “worthy” of an award often juxtaposes the general public’s opinions. It’s important for creative teams to understand – making a successful ad for one audience might not work with the other.  While TV industry insiders vote to decide the winning nomination for each category, we wanted to see who would win if it were up to the general public:

If the judging process for Outstanding Commercial was based solely on how well these five ads performed amongst the general public, “Groundhog Day” would come out as the clear winner. Highdive Advertising’s Jeep ad starring Billy Murray pays homage to the movie Groundhog Day from 27 years ago, showing the star reliving the same day over and over again, but this time loving it because of his brand new Jeep Gladiator along with his furry woodchuck friend. The emotional impact from this ad cannot be overstated- viewers not only found it Funny and Nostalgic, but Ingenious and Memorable as well. 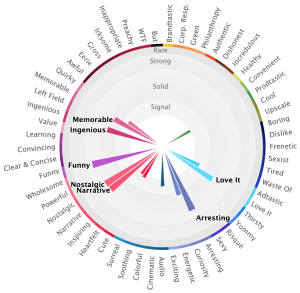 “Groundhog Day” not only outperformed the other four nominees on our Emotional Measures, but also across the board on traditional metrics like Attention and Likeability, surpassing auto industry norms from the last year across nearly all components measured:

Created by BBDO New York, Sandy Hook Promise’s “Back-to-School Essentials” starts off as a seemingly traditional back-to-school commercial by showing upbeat students talking about desired school supplies. Although in this spot, the application of the school supplies is for surviving an active school shooting.

Of the five commercials nominated for an Emmy, “Back-to-School Essentials” message stood out most, with 44% of viewers choosing it as the Single Best Thing about the ad. This PSA was unabashed in its delivery, leaving viewers with intense feelings. The increasingly grim plot escalation left viewers shocked, often unsure of how to feel towards the scenes portrayed throughout.

This internal conflict between the agreeable message and disagreeable execution resulted in Rare But signal among Gen Pop viewers. In fact, “Back-to-School Essentials” scored in the top 0.1% of ads on But and shares similar emotional traits with 14% of Cannes-winning ads. Since the final winner is decided by the voting members of the Television Academy instead of gen pop consumers, it has a good chance of snagging the win as the biggest provocateur of the bunch. Viewer verbatims below reveal what viewers think, but what will the industry think?

“I have seen this ad numerous times and watch it every single time. It is an extremely powerful ad with an unfortunate but necessary message. While I don’t like that there has to be ads like this, I really appreciate the message it sends. Heartbreaking but necessary.” Female 36-49

“Very impactful and emotional, although I thought the final message about knowing the signs was too vague. It should have been more blatant about what should be done about the problem.” Male 36-49

“I honestly feel like I got blindsided. I thought it was just another shopping ad promoting back to school supplies but it took a very dark turn. I actually felt a little uncomfortable. I don’t think an ad has ever made me feel that way.” Female 21-35

In Amazon’s Super Bowl LIV commercial made alongside Droga5 London, Ellen DeGeneres and wife Portia de Rossi contemplate how humanity must have managed before Alexa. Although not the highest-scoring ad from this year’s plethora of funny Super Bowl spots, “Before Alexa” carried the torch of Amazon’s inclusion of Alexa and it’s capabilities by creatively utilizing humor: 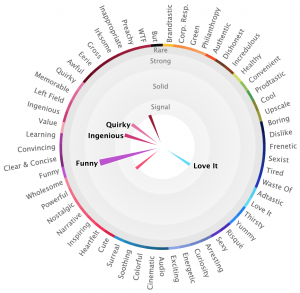 This spot is Amazon’s second shot at winning an Emmy for Outstanding Commercial, having been nominated in the 2018 Emmy Award show for their “Alexa Loses Her Voice” creative which was also a top-performing Super Bowl spot.

Continuing on the path of Apple’s award-worthy advertising, “Bounce” stuck to the brand’s roots of demonstration-style spots showcasing the ethereal sensation that AirPods can have by turning random objects into trampolines. It’s no wonder the captivating, high-quality visual scenes created with the help of TBWA/Media Arts Lab stood out so prominently in this spot. Thirty-four percent of viewers chose the Visual Scenes as the Single Best Thing about the ad – making “Bounce” the most stand-out of the nominees for this metric.

If it were up to the general public, they’d be more inclined to vote for the :30 cut-down of “Bounce.” The punchier execution helped the :30 version perform much better on traditional metrics compared to its longer counterpart across 1-year tech industry norms:

Additionally, the shorter version of “Bounce” evoked a range of positive emotions among viewers like Audio, Cool, and Surreal, as well as the emotion that showed the strongest signal, Colorful. Ironically for a B&W ad, Colorful showed its prominence due to viewers taking note of how the scenes were made up. 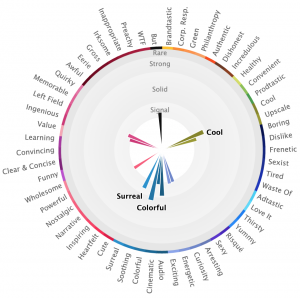 Just as relevant as when it first aired in 2019, “The Look” placed attention on current social issues that have been exacerbated by recent events by showing a Black man going through life while being stared at by people giving him “the look.” 43% of viewers found the Message to be the Single Best Thing about this ad, and rightfully so since its focus was heavily on driving the purpose to viewers. Viewer verbatims below reveal some of the different sentiments towards this creative:

“I like what the message of this ad says – equality and nondiscrimination are always important, and considering corporations have so much power to sway public opinion, they might as well use it for something good. That being said, I am always a little skeptical when I see a commercial like this because I feel like it’s just propaganda to sell more stuff.” Female 21-35

“Very good ad for making people take a look at how they treat other people. I don’t think PG has anything to do with that and attaching a company to it cheapens it for me” Male 21-35

“At first, the ad was a little slow paced, but then it picked up and you could see ‘the looks’ more. I really liked how the man ended up being the judge and I think the message was great about “Let’s talk about the lookon.”. That’s great for P&G to say, but what actions are they going to take to have (or help others have) those conversations within their company and outside of it? Now I want to see the action they build on! It’s not a new message, but it’s a needed message.” Female 50+

While the message is certainly powerful, ads like this walk the line between empowering and preachy. When brands don’t make a vivid link between their products and the message, viewers end up having a hard time getting on board.

Which one will the Emmy judges pick?

With award night just days away, one thing is for certain: if it were up to the general public, Jeep’s “Groundhog Day” would take home the golden statuette. Its achievement of having the highest Ace Score, driven by the abundance of emotions with which it connected with viewers, allowed “Groundhog Day” to shine brighter than its competitors. Based on data from our study of Cannes Lion winners, it’s unlikely that judges will pick the same winner as the general population would. Sandy Hook Promise and P&G could get boosts from their current social and cultural relevance, Amazon’s got celebrity power and Apple is, well, Apple. Each creative is award-worthy, striking unique emotional chords with viewers, that while they may not drive purchase intent are certainly memorable.

And the winner was: Sandy Hook Promise & BBDO NY took home the Emmy for Outstanding Commercial on September 20th, just as our data foreshadowed above.