Each year around the holiday (and month of March), brands parade women-centric initiatives and female empowerment messages in an attempt to show solidarity and resonate with a large demographic. Driving sales doesn’t hurt either.

But not every brand gets it right. Pink washing, a disingenuous attempt to promote women’s rights in the eyes of consumers, is a real threat for brands. It’s why we’ve already revealed ways to avoid exploiting consumers with female empowerment and gender equality messages (here). Making a genuine connection between the brand and the message is a must on our Empower score.

With International Women’s Day 2020 behind us, we thought we’d share how this year’s crop of ads resonated with female viewers:

The 60-second version was the stronger performer of the two, but both significantly beat Sporting Goods Store norms across every quantitative score. Information (in the form of a “did you know”) ﹣ the key creative driver at levels 31%+ above norm for the longer cut ﹣ was delivered in an Attention-grabbing and Likeable manner that drove positive purchase intent among 58% of females (vs. 32% norm). 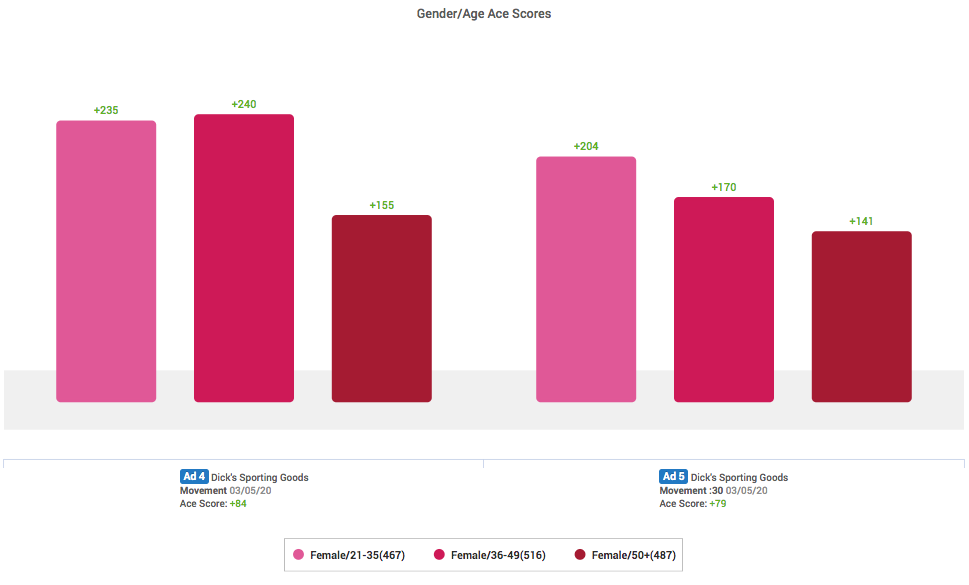 Dick’s Sporting Goods :60 spot was also one of the most successful IWD2020 ads in terms of Cultural Perception and emotional connection. Out of all of these ads, the 60-second version scored highest on Inspiring and made the strongest emotional impact across a wide array of positive metrics, including: Narrative, Cinematic, Curiosity and Cool.

Thanks to its powerful message that was relevant to the brand, female viewers scored the 60-second “Movement” as the most Empowering so far this Women’s History month.

LinkedIn took a targeted approach to their IWD spot, focusing on working Moms who may have a gap in their resume from time off. While the spot generated a good amount of internal conflict for some respondents (as seen in the high “But” score), overall, women found the spot Empowering, slightly trailing Dick’s “Movement” spot. Negative reactions to the ad stemmed from the length (2:00+) as well as the targeted nature (lower relevance for non-Moms). The spot sparked interest in LinkedIn’s offerings, with Purchase Intent at 54% for top two box respondents, second only to Dick’s. 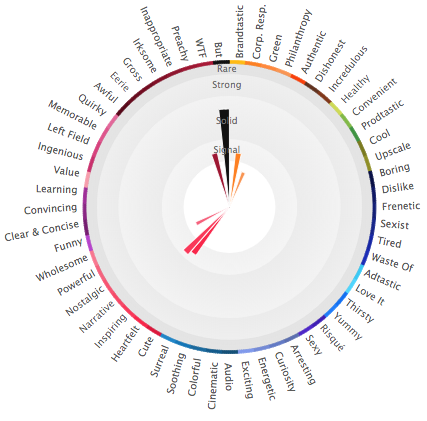 According to female viewers, Ancestry’s “Make Them Count” was the most Authentic approach to International Women’s Day as Inspirational historic storytelling tied in seamlessly with the product. The spot also sparked Solid levels of Curiosity as females commented how they wondered about their family’s connection to the women’s suffrage movement of the 1900s: 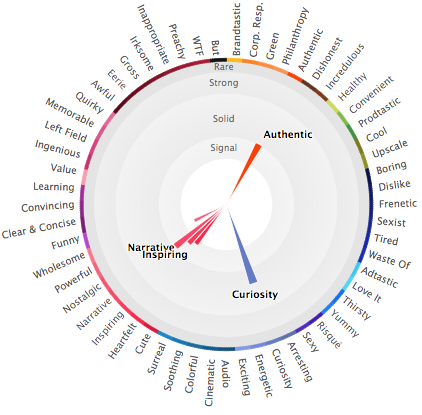 Curiosity translated into strong product consideration, with 44% of females reporting positive visit intent compared to 36% for Health & Fitness norms. The focus on the courageous, hard-working women of the past resulted in Signal on our Empower metric, which is quite an impressive feat given only 12.5% of ads achieve any score.

Apple “Behind The Mac”

To the tune of Beyonce’s “Flawless,” the women speak for themselves in Apple’s “Behind the Mac.” Without even mentioning International Women’s Day, females found this spot especially Relevant (+16% above Computer Hardware norms) and visuals of the product also drove strong Desire.

However, “Behind the Mac” scored highest on Exploit due to the lack of connection between the message and the product as well as content deemed Sexist and Inappropriate by female viewers. While it also scored Solid Empower signal, the negative cultural impact outweighed the positive. A handful of viewer comments below illustrates where some of the Strong Exploit signal originated from:

“Of course, Apple is trying to appeal to women of all ages and demographics with this ad for Mac laptops. I found it rather obvious and somewhat heavy-handed in its approach. What is it really saying about women or their use of Mac products, and, for that matter, who cares?” Female 36-49

“What even was being advertised. It was weird having still images just play over a beyonce song. Does beyonce know youre using her song. Also i get that corporations are trying to capitalize on the independent women movement but this was just lazy” Female 16-20

“It kind of seems like this company is just doing this for the clout. It would be more engaging if the photos changed to the beat of the song. The song cuts of really weirdly.” Female 21-35

“I liked the message that we have different expectation, goals, etc for girls that puts women at an unfair disadvantage compared to men. I’m not sure I could relate that message to why I should buy a Mac. Is it because Mac invests time and money into women’s issues?” Female 36-49

Like Dick’s Sporting Goods and Ancestry, Mini Cooper gave viewers a female-focused history lesson commemorating rally driver Pat Moss. Her biographical narrative made for an Informative spot, 31% above Non-Luxury Auto norms. Learning about Pat’s achievements in a once-male-dominated-sport made a positive impact on female viewers, with this ad scoring in the lightest band of Empower signal: 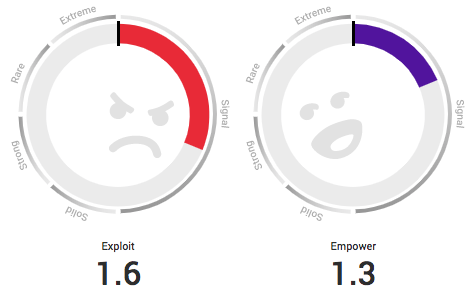 However that was countered with a slightly higher score on Exploit, with females ages 21-35 contributing to this signal most. Most of this negative cultural impact didn’t originate from Mini Cooper itself but rather viewers’ fatigue from brands across industries tapping into similar, gendered messaging.

Shell Oil “She Will”

Shell, perhaps an unexpected entrant in the IWD ad fray, produced a spot that seemed on its face to be a fairly benign ad about empowerment. Then, they turned their logo into a message, “She’ll #MakeTheFuture gender balanced, and moved into the pandering realm, as seen in our second by second respondent Trace. It is key for brands to show actual action taken, not simply words. The spot evoked equal levels of Empower and Exploit, putting the spot into Edgy territory.

“I love the evocation of positive women’s imagery and progress. However, it seemed cheapened by the fact that the women shown in the commercial were not shown is a capacity, role or program at the organization, just a play on words. It evokes the right feeling, but doesn’t show any concrete action/promotion.” Female 21-35

“It was interesting and I sort of enjoyed seeing all of the different faces and smiles. But it was overt pandering to women. Even as a woman, I am tired of seeing all of the feminist hype these days.” Female 36-49

“Very eye catching and nice empowerment of women message. Can’t help asking if Shell is just cashing in on the me too movement. Or are they sincere about treating women equally?” Female 50+

Orangetheory’s attempt at humor, suggesting that women were “cut short again” because IWD fell on the same day as Daylight Savings, missed the mark for women (and men). Women noted that the ad took female victimization too far, landing the spot highest on our Sexist Emo. Exploit was also among the highest score of the IWD ads. Brands haven’t seemed to figure out how to combine humor with an empowerment message, Orangetheory included.

“It’s quite a bit dramatic for a fitness company. To point out something like fewer hours in a day like all the men in the universe purposely chose a day with fewer hours just to spite women for a fitness company is a little sad. I thought it was going somewhere meaningful. It took until the last second of the ad to show the product.” Female 21-35

“I absolutely HATE this ad. It plays to the “victim mentality” that is so prevalent right now. International Women’s Day should be about highlighting what women do well, not about whining without cause about how “victimized” women are in our society.” Female 50+

“the fact that they used daylight savings time (which isn’t even recognized in some states) as another reason to say women arent equal is ridiculous…..and i’m a woman. It’s like they are trying to find any reason that women arent equal” Female 21-35

“Refuse to Compromise” starts out with all the potential of a highly polarizing spot focused on work place gender discrimination but takes things in a more product-forward approach. With an emphasis on safety features, Nissan didn’t move the Cultural Perception needle (Empower or Exploit) in either direction among female viewers. However, light signal on our Narrative Emo indicates some females connected with the subtle gender storyline, whereas male emotional responses related to the product and the innovative features (Prodtastic, Upcale): 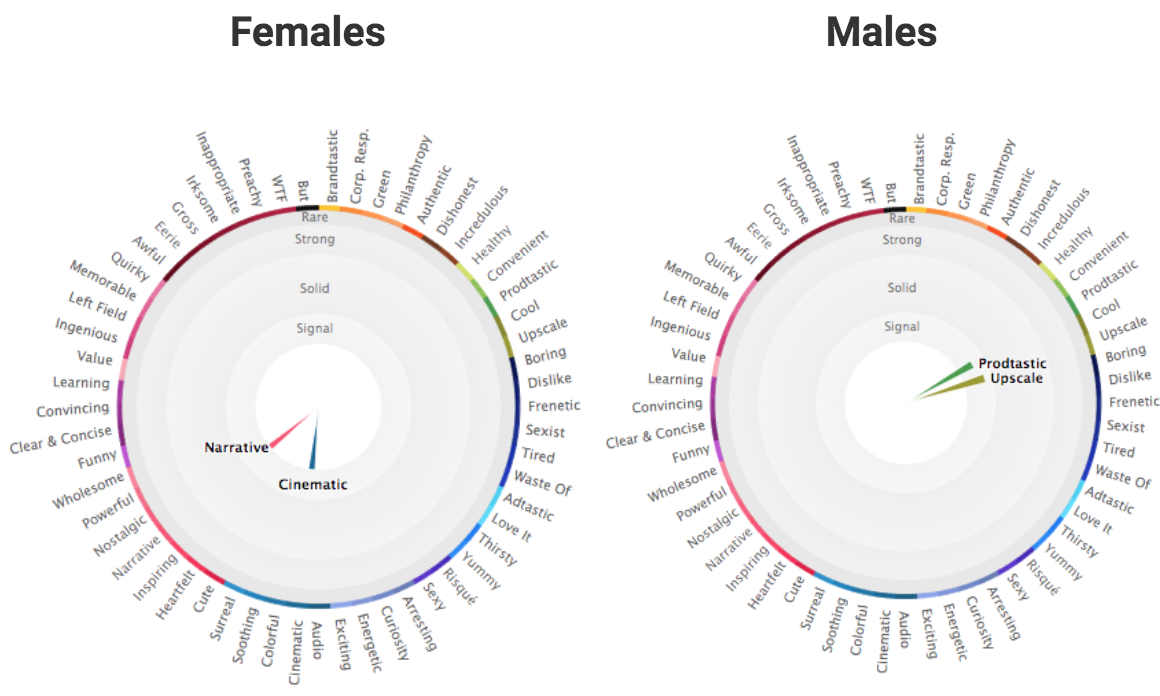 From this year’s International Women’s Day ads it’s apparent that the topics of female empowerment and gender equality are touchy. In most cases, female viewers found these ads more exploitative than males suggesting this type of messaging might alienate more than one would expect when targeting half of consumers. All negativity aside, we saw some brands like Dick’s Sporting Goods and LinkedIn step up and really Empower females on International Women’s Day.

How Brands Are Navigating the COVID-19 Pandemic