The lack of excitement during Sunday’s game between the New England Patriots and the LA Rams means more post-game buzz for the brands that bought air time.

“The day after the Super Bowl seemingly everyone wants to put out a list of what they thought were the best ads of the Big Game. After millions of dollars in creative production and the most expensive media buy, careers can be made and lost,” said Peter Daboll, Ace Metrix CEO. “But most of these lists are opinions of industry insiders, not representative of how viewers received the ads.”’

He continued,  “Let’s remember that many of the Super Bowl ads are trying to accomplish different objectives—some purely entertaining, some tug at heartstrings, and others push specific products. So to judge them based on the same criteria doesn’t say whether they were successful in their own right.”

Using Ace Emo, which quantifies an ad’s emotional impact compared with tens of thousands of ads, we wanted to recognize the Super Bowl LIII ads that stood out to viewers for one of the following emotions: Funny, Heartfelt, Ingenious, Eerie, and WTF. The methodology is based on deep Natural Language Processing and machine learning analysis of hundreds of viewer reactions to every ad – in their own words.  Results are generated from consumer data, where each ad is rated by more than 500 real world viewers all across the country.

This ranking was derived from our Funny emotional metric, where the stronger the signal the more agreeable the humor. Brands have a tough challenge standing out for this Emo on the Super Bowl stage as they’re competing with so many other ads that are going for laughs.

Like many humorous Big Game ads before them, five of this year’s funniest benefitted from a celebrity’s star power and acting prowess. Michael Buble was the only guy for the job in Bubly’s “Can I Have a Buble?” creative. The pairing, which seems obvious in hindsight, came off as ingenious and memorable to viewers as well as funny, as shown in the emotional profile below.

In the second funniest spot, the NFL threw the ultimate football dinner with some of the sports most notable athletes in order to celebrate its 100th season. Despite being a lengthy 2:00, viewers were entertained, scoring “The 100-Year Game” above Super Bowl advertising norms on Watchability (I’d watch it again) and Breakthrough — Attention & Likeability.

Another funny celebrity spot, owners really do look (and act) like their dogs in Avocados From Mexico’s “Top Dog.” The dog-like people and Kristin Chenoweth (Characters) were named the top Single Best Thing by 31% of viewers.

Lastly, Bud Light continued its Bud Knight saga to help evoke a humorous response and let viewers know it’s not ashamed of its ingredients because they don’t use corn syrup. Information, Attention and Likeability were the strongest components for each of Bud Light’s ads that made our funniest list.

These rankings were derived from our Heartfelt emotional metric, which is evoked when an ad is moving (whether it’s happy, sad, or bittersweet) as a result of the story, message, characters, visual scenes, or all combined. While humor can be polarizing, heartfelt ads have the power to connect with all viewers. Likeability was one of the strongest components for each of the following ads.

Verizon earned the top spot with “The Coach Who Wouldn’t Be Here,” where one in two viewers named the first responders Message the Single Best Thing. A second ad from the same Verizon campaign ranks as the third most heartfelt from the night.

Similar to its holiday spot from 2018, Microsoft used the Super Bowl stage to promote inclusivity. “We All Win” scored significantly above Super Bowl advertising norms (since 2010) for each component we measure save for Desire, which is appropriate given most consumers don’t need an Xbox Adaptive Controller. 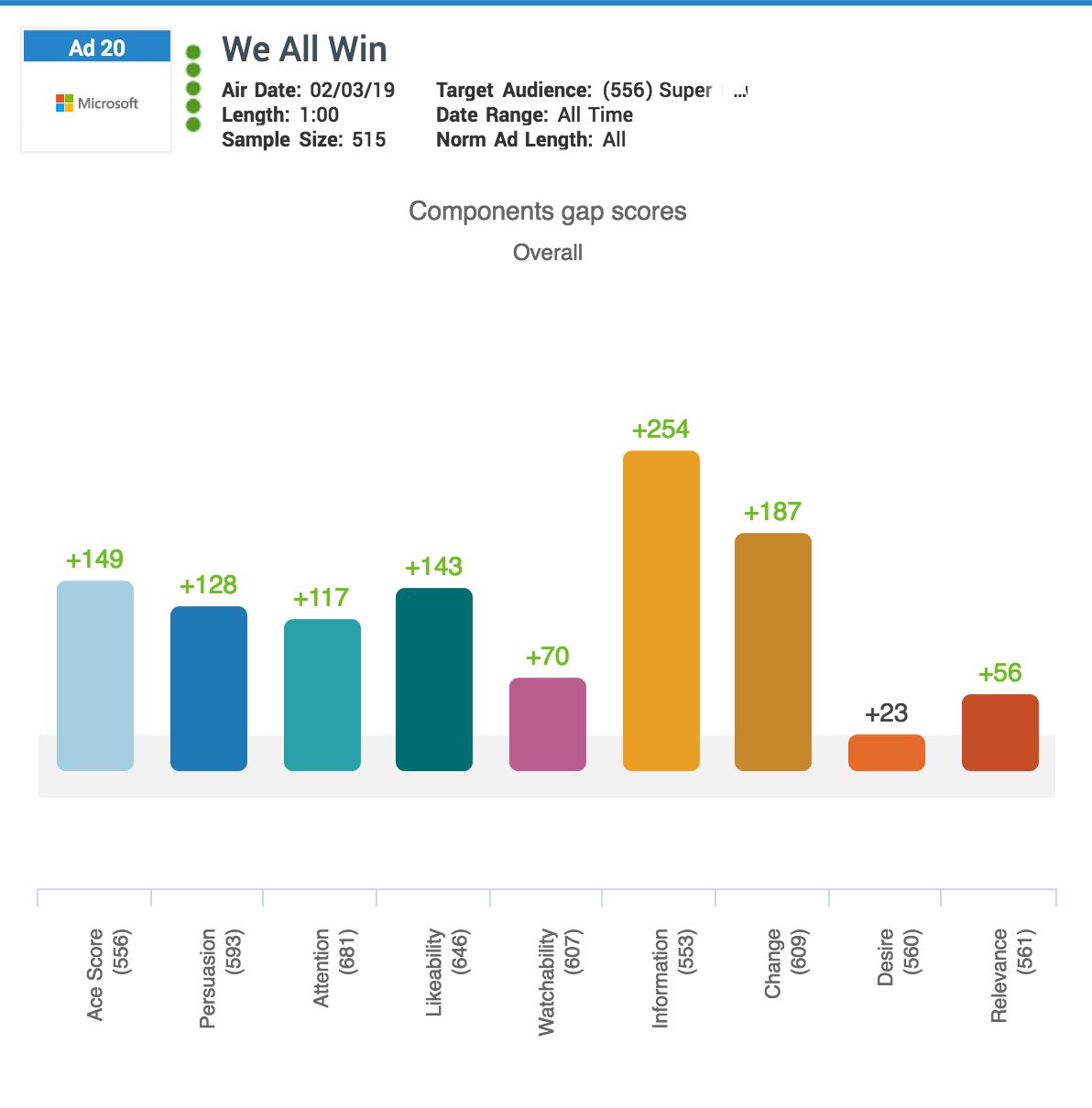 In the first of its heartfelt ads, Google directs its message to the seven percent of Americans that “keep the rest of us safe.” On top of that, Google showed us the human side of Translate in “100 Billion Words.” The spot originally aired in 2015, but it’s message is still relevant to viewers today.

The following was derived from our Ingenious emotional metric, which triggers when an ad is seen as clever, or viewers find the product/service innovative. These ads benefit from memorability as their unique qualities tend to leave a lasting impression.

Like Bubly, Hyundai found itself among the most ingenious and funniest ads from game day. Hyundai cleverly used an elevator to position Hyundai’s Shopper Assurance program above normal car shopping while comparing the latter to horrible experiences, like a root canal. Lapsed customers and brand considerers were impressed, resonating above auto advertising norms with “Elevator.”

Mercedes Benz demonstrated the new, innovative features of its A-Class model by giving one man the ability to control anything with the power of his voice. “Say The Word” successfully drove Desire among viewers, which was the strongest component measured.

Audi made a bold move and showcased one of the concept cars from its upcoming line of electric vehicles, the etron GT. Paying the high price for Super Bowl airtime to advertise a product that’s not yet available seems risky. However, as its ad personality chart demonstrates (above), Audi successfully informed viewers that it’s moving in a new direction (Change).

Derived from our Eerie metric, these ads make viewers feel uneasy or scared, often as the result of (really) weird or scary ad content. Brands may purposefully try to connect through this non-traditional emotion as a way to generate that “can’t look away even if you really want to” attention. Consequently, Attention scores were the strongest component for each of the five most eerie ads.

Derived from our WTF metric, which signals when the message is confusing, or when there’s no connection between the ad and the brand advertised, leaving viewers with that “WTF did I just watch?” reaction. Advertisers that spark WTF emotions tend to forego classic campaign metrics in order to make a statement, wow with cinematic visuals or both. Some brands knowingly go this route for the Super Bowl as a way to generate buzz around their ad, while others may have had no intention of ending up here.